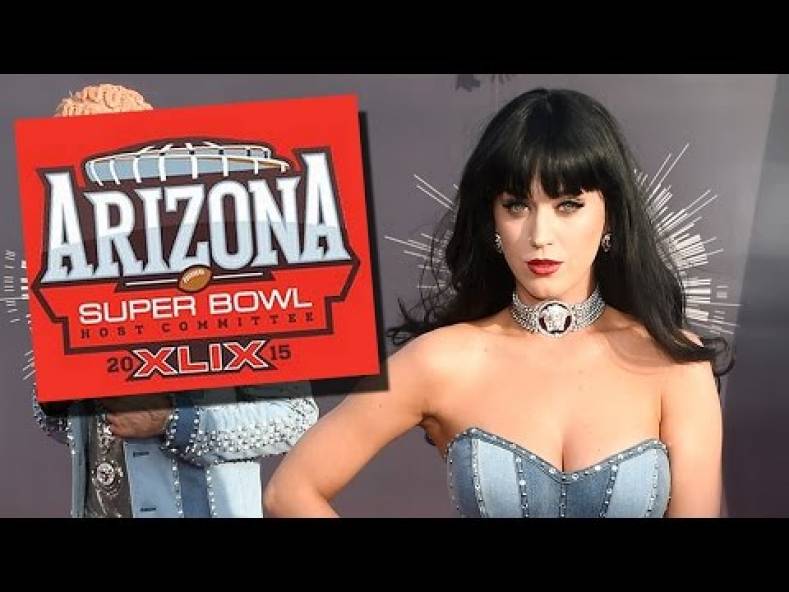 Katy Perry was the half-time star at the 2015 Super Bowl.

The Super Bowl is as much about sound as it is the specular images generated by millions of dollars in video gear.

The Super Bowl is as much about sound - the roar of the fans, the chants of the cheerleaders, the fast and sometimes frenzied delivery of the commentators and pundits, the emotional or occasionally eccentric rendition of the National Anthem, the decisions of the referee and the glitz of the half-time show - as it is the images of the men in tight trousers, shoulder pads and helmets running about with a ball of dubious inflation.

This year's event was no different, with the interval performance by Katy Perry pushing all the "spectacular" buttons and getting as much media attention as the New England Patriots' 28-24 victory over the Seattle Seahawks.

Behind the host of sound mixes of the presentation, commentary, field effects and entertainment were a team of operators and engineers, five mixing consoles, 114 microphones and a number of inputs that main game mixer Wendel Stevens described as "too numerous to even guess". 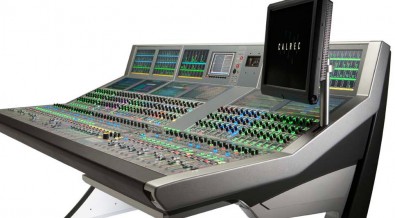 Calrec Apollo mixer was central to the 5.1 surround audio for the NBC audience.

Stevens was working at the 72 dual fader Calrec Audio Apollo digital desk with Bluefin 2 signal processing in NEP Broadcasting's ND1 production truck. Feeds for the National Anthem, belted out by Broadway star and unlikely heroine of little girls every where from her performance in Frozen, Idina Menzel, and America the Beautiful, sung by R&B singer John Legend, were also taken into Steven's console. The half-time show was mixed in another NEP mobile, Denali California, which is equipped with a 144 multi-layered fader Apollo.

Also working in ND1 was Ryan Outcalt, who prepared the game effects on the vehicle's 48-fader Artemis Beam sub-mix desk, which has connections to a Calrec Hydra distribution system and MADI circuits. The pre-game studio show was mixed by Mike DiCrescenzo on the 86 dual layer fader Alpha board in NEP SS24, while Lee Pfannerstill QCed "dozens" of feeds between the mobile truck area and both RF system supplier BSI and other locations in the University of Phoenix Stadium. 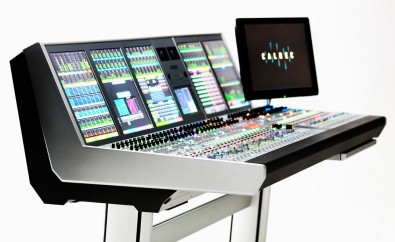 Stevens estimated there were probably "well over 100 inputs for each console", with a mixture of analogue, embedded and MADI signals being carried through the compound on "miles of cable". He added that "most of the distribution of shared compound feeds" was done over MADI generated by the consoles and Grass Valley Sonata Series analogue to MADI converters.

All NBC sports programmes are produced in 5.1 and the discrete surround sound format featured for the Super Bowl. "It's pretty much the same show I've done all year on Sunday Night Football," Stevens said. "The game sounds are up front, the announcers are in the centre and the crowds are in the rears."

To help create as accurate as possible a sound picture of the game, a wide range of microphones was used round the arena. This involved 12 manned parabolic microphones based on Sony ECM-77 miniature omni-directional lavalier units that could be directed to different areas and pick up specific sounds; 10 crowd microphones that were a mixture of Sennheiser ME64 shotguns and Audio Technica 8022 X/Y stereo mics; 24 mics mounted on cameras (Sennheiser 416 and Audio Technica BP4029 shotguns) and ECM-77s on each goal post.

Sennheiser ME 416 shotgun microphones were used on many of the field cameras.

There was a total of 50 mics for the talent working on the show, with 10 RF units supplied by BSI. On top of this there were six to eight player microphones, which were encrypted and controlled by the NFL. The mic feed for referee Bill Vinovich was taken directly from the stadium into the broadcast desks. Play-by-play announcer Al Michaels and 'colour commentator' Cris Collinsworth were fed through Studio Technologies Model 230 commentary consoles. 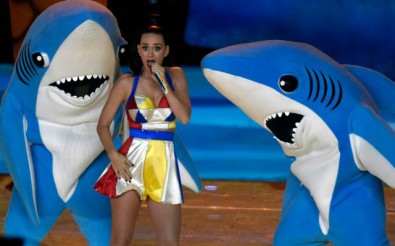 Social Media was alive with comments about the left shark marching to his own beat throughout the Katie Perry half-time performance. Image courtesy fanatix.com.

The audio, both for TV and in the stadium, seemed to be connecting and doing what it was meant to. It's just a pity that such a slick performance is now being somewhat forgotten on social media in favour of jokes about the dancer during Katy Perry's performance of Teenage Dream, the now infamous Left Shark, who ignored the beat in the sound mix and everything else around him.