With preparations well under way and a week before the big game, a team of 70 NEP system engineers, tech managers and other specialists descend upon Phoenix, AZ to help create one super-television experience for more than 110 million viewers.

NEP Broadasting, the Pittsburgh, Penn.-based mobile production company, is handling coverage of the game, pregame, halftime, NFL world feed, NFL domestic news organizations and a number of shoulder programs originating in Phoenix that have already started this past Saturday. It’s a herculean task, but one the company feels confident about, according to Glen Levine, co-president of NEP's US Mobile Unit group. 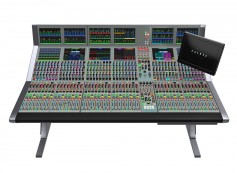 A Calrec Apollo console in NEP's ND1 will handle key audio duties for the game.

The second Game Truck, “ND4,” is the company’s “Double Eagle” truck, which has recently been upgraded with a full 3Gbps infrastructure and other new amenities. This truck is used primarily for NBC’s golf coverage.

Another 23 trucks, set up in small “systems” outside University of Phoenix Stadium, will join these three large trucks. Basically there are 13 different systems on site for a variety of clients (NBC, Telemundo, ESPN International, etc.) that consist of three trucks— “A”, “B” and “C”—to a system) within the large production compound. All are tied together with SMPTE hybrid fiber cabling, so that the three trucks of each system act as one. Six systems will be tied together for NBC and its many properties (e.g., Telemundo) alone.

“This is by far our biggest event of the year in the U.S.,” said Levine, who added that NEP Broadcast produces hundreds of live games each year for a variety of sports outlets, both national and regional. “The toughest challenge is logistics and making it all work in harmony.”

In total, NEP will use 26 production units and some 60 cameras for the main game and its related events. The Sony HDC-2500 cameras will be complemented with five Sony F55 4K cameras (for slo-mo replays and to support “public viewing” areas around the stadium).

The Sony HDC-2500 system camera is the successor to the HDC-1500R Series (many of which will be used to cover activities outside of the big game, such as DirecTV’s Beach Ball studio show and live game coverage). The HDC-2500 incorporates Sony’s advanced technologies for studio cameras, such as a newly developed 2/3-inch CCD and new DSPs along with 16 bit A/D conversion that Sony said provides amazing picture quality with low noise and high dynamic range. 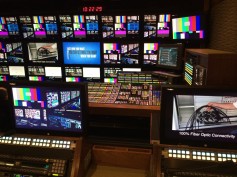 Interior of NEP's ND-1 truck, which relies on a 192 X 96, 9ME Grass Valley Kayenne production switcher.

The HDC-2500 also provides the capability for transmitting directly from the camera via its side panel that can be easily replaced to fit HD Wireless (3rd Party) or Triax transmission systems. The camera is 3G compatible and has multi-format acquisition capability, from 1080/100i (double speed) to 1080/50P, as well as a wide range of other formats including 1080/50i, 1080/25P and 1080/24P.

“We love these cameras and what they bring to the production,” Levine said. “This is a no-compromise show, so we’re using the best cameras we can find.”

“There will a lot more 4K cameras used this year,” Levine said. “We’ll also have several 4K Imovix Robo cameras mounted on the near side of the right and left end zones to give viewer a unique POV when goals are scored.”

This includes the five Sony F55 4K cameras—which will be used to shoot the action at a high frame rate and then slow it down for replay analysis—as well as the I-Movix “RoboCam” X10 ultra slow motion system (which is based on the Vision Research Phantom camera). At the Super Bowl, several high-speed X10 cameras will be controlled from a single X10 CCU inside ND1.

Of course NEP is not the only remote production services company involved this year. Hudson, N.H.-based Game Creek Video will send five of its newest trucks to work with ESPN.“Victory” and “Justice” will be stationed in Scottsdale, AZ to produce a variety of Super Bowl-related events leading up to the game and “Freedom” will be located at the stadium. Between the five trucks, there will be a total of 21 Sony HDC-1500 HD cameras in use.

For the NFL Network, Game Creek is supplying its “Pride” truck for the NFL Pro Bowl draft, then media day and then the stadium, containing 15 Sony HDC-2500 HD cameras.

Other camera systems used at the game include the “SkyCam” overhead camera system that is suspended above the action and provides viewers with a captivating view of all of the action. The camera is suspended by two high-strength cables that create an x and y axis, which allows the camera to move anywhere across the field. A series of winches and pulleys loosens and tightens the cables, creating not only the movement around the field, but the camera height as well, giving the camera operator the option to zoom down onto the field for close-ups and other views.

Interestingly, the SkyCam camera operators are required by the National Football League to stay behind the action and at least 12 feet above ground level so as to not impede play.

We’re sure NBC has a few surprises to be revealed on Sunday, February 1st. Major sporting events like the Super Bowl have always been a good proving ground for production companies and their equipment alike. With so much at stake, it’s not a place to test new gear, but that never stopped a TV network from trying something new each year. This year’s contest between the New England Patriots and the Seattle Seahawks should be no different.

Want to learn more about the behind-the-scenes at Super Bowl 15?