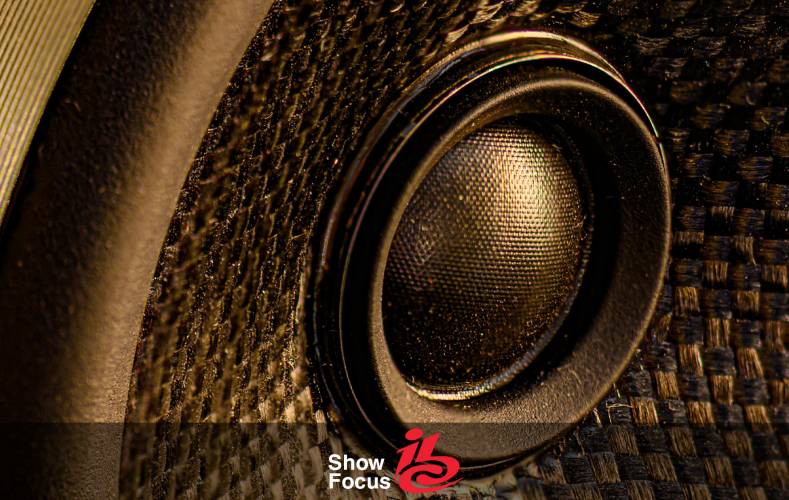 Efficiency and flexibility will be the focus for some audio manufacturers at IBC 2022. As for technologies, IP networking with its associated benefits is still very much top-of-mind, interest in immersive audio, largely relegated to the backburner during the pandemic, may be about to be rekindled, and virtualization is beginning to become a reality.

“Here at TSL we see the continued acceleration in the deployment of IP-based audio transport, utilizing both open standards, such as AES67 and ST2110-30, and proprietary standards, such as Dante,” says Mark Davies, TSL Products Director of Products & Technology (Stand 10.B41). The company will introduce products that offer new efficiencies at IBC, he reports.

Early adopters of ST2110-30 had to use a 10 GbE port on the switch to access audio for monitoring purposes, he notes. “But this was not the most effective use of bandwidth or investment. So at IBC 2022, TSL will introduce the SAM-Q-NET. This product allows cost effective switch connection using a 1 GbE port for ST2110-30 audio monitoring.” 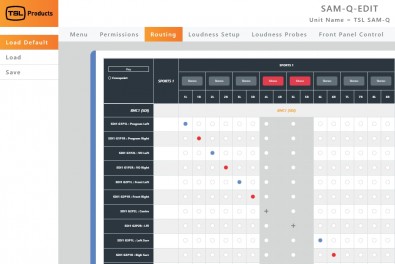 In the case of a major sporting event, he offers as an example, “Pre-configuration has the potential to save a day’s OB hire. This will not only save money but streamlines operations as configurations are ready to load upon arrival at an event, reducing setup time and removing the need to build configurations through the front panel menus.”

It’s useful to remember that, while IP audio networking has been at the forefront of conversations for many years, its adoption by broadcasters is still in the relatively early stages. Consequently, many facilities feature hybrid workflows as broadcasters add an IP router here or an IP mixing console there and find themselves having to interface between new and legacy environments.

“One of the things we want to keep reinforcing is that baseband isn’t going away,” says Dave Letson, Vice President of Sales at Calrec. “So you need a gateway between the two devices.” At IBC 2022, Calrec (Stand 8.B57)will be demonstrating its Gateway box bridging an ImPulse core and a Hydra2 core.

Beyond straightforward, all-IP setups and hybrid flows, Letson says, “What customers are saying is they need more versatility. They need more choices for how they work and where they’re going to put equipment,” based in no small part on their experiences working remotely during the pandemic.

One client is installing four Calrec console surfaces in a production area with the racks and cores in another city. “That gives them the ability to utilize that production area more regularly than they could have done in a baseband scenario. It’s leveraging IP but also looking at products that can be more flexible in how they interconnect. Whether that’s over a web UI — in our case, Calrec Assist — or a physical surface, they want that flexibility,” Letson says.

A couple of broadcasters are contemplating controlling rented OB trucks from remote surfaces, and not just audio but also video, he adds. That may point to a potential evolution of the remote vehicle business: “It could lead to trucks with just racks onboard.”

Taking that a step further, Letson continues, “Clients are beginning to demand more cloud surfaces. It gives them not just the flexibility they need but allows them to move into an OpEx scenario; there’s no huge capital investment. If they want to try a new sport, they can spin up a channel in the cloud.” Audiotonix recently announced that it has “developed a technology Proof of Concept that will provide the backbone for…Calrec and Solid State Logic to further develop cloud solutions based on their unique production workflows and feature sets.”

Riedel (Stand 10.A31) will introduce an addition, the Audio Monitoring App (AMA), to its 1200 Series SmartPanel at IBC 2022. Enabling operators to monitor audio streams while managing a production at the same time, with the Audio Monitoring App and Intercom App running together, means that the RSP-1232HL and RSP-1216HL SmartPanels are the only devices that can operate intercom and audio monitoring simultaneously, according to the company.

According to Kristina Uhlitz, Product Manager, Riedel Communications, “The AMA allows a direct connection to any SMPTE 2110-30 stream available on the network, either dynamically managed via NMOS or in a static SDP-based configuration, mixing the audio directly inside the 1200 Series SmartPanel. The configuration of the AMA can be done via a dedicated configuration tool or via a broadcast controller using the built in API.”

SmartPanel users can monitor up to 16 stereo SMPTE 2110-30 streams in parallel while a total of 256 stereo channels can be pre-configured and managed directly on the panel. With the Audio Monitoring App and the Intercom App running on the same endpoint, the inter-application behavior can be predefined in the configuration, such that, for instance, an incoming intercom call will automatically dim the monitoring volume and soloing an audio source will dim the audio coming from the Intercom App.

“Benefiting from the 1200 Series SmartPanel‘s high-fidelity speakers, the intuitive UI and the ability to manage the inter-app behavior, the Audio Monitoring App makes a separate audio monitor obsolete, saving cost and rack space and delivering an improved workflow” Uhlitz says.

While more and more streaming content is produced in immersive formats like Dolby Atmos or MPEG-H Audio, a significant majority of viewers will only listen through a stereo setup, observes Renato Pellegrini, Manager ProLabs of the Sennheiser (Stand 8.D50) AMBEO team. “In the creation of AMBEO 2-Channel Spatial Audio, our aim is to deliver an immersive sound experience for viewers that do not own a surround sound system of some sort but just standard stereo speakers,” he says. 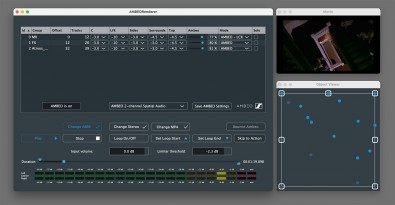 The AMBEO 2-Channel Spatial Audio renderer creates enveloping 2-channel audio from an existing immersive mix. The software runs in the streaming service’s cloud-based encoding pipelines. “This conversion in the cloud has some benefits,” Pellegrini says: “The re-recording mixer uploads an ADBM or IAB file and then re-renders into the various formats in the OTT provider’s cloud. There is less upload bandwidth required, and the workload for dubbed content is significantly reduced.”

Pellegrini emphasizes that AMBEO 2-Channel Spatial Audio seeks to translate mixer intent, not to overpower it. “The re-recording mixer can fully rely on the rendering software but select the amount of immersive effect freely, from just a little or zero on dialogue to full AMBEO on any audio effects,” he says. Total loudness is preserved, and a music mix can be kept clean for left and right channels while adding the immersive AMBEO rendering to other channels.

“The rise of immersive audio, the fast-growing momentum of distributed and virtualized production scenarios, and the desire to simplify and optimize IP infrastructure management are what Lawo’s customer base brings up most frequently,” sums up Lucas Zwicker, Senior Technical Product Manager Audio Production, Lawo (Stand 8.B90).

Immersive audio is about to go mainstream, he says, pointing to examples such as EDM festival Tomorrowland in Belgium, which recently live-streamed Dolby Atmos to more than six million viewers, and broadcaster Sky Germany, which is creating immersive audio for all first-league Bundesliga soccer matches. Lawo will announce support for other immersive formats soon, Zwicker adds.

The decision to switch to immersive audio production for live sports encouraged Vidi, Bundesliga’s technology partner, to develop the Remote Audio Control Room (RACR) concept, together with audio engineer and academic Felix Krückels, where the audio control room in Darmstadt, Germany connects to a Lawo A__UHD Core at the venue, which may be up to 400 miles distant.

Also demonstrating the trend towards decentralized, distributed audio and video production, the setup relies on redundant WAN connections over IP. The second audio core, positioned much closer to the RACR than the one doing the heavy lifting, serves only as a backup unit in the highly unlikely event of a failure. Latency is not an issue; all processing takes place at the venue (no audio is processed at the RACR) and audio IP essences travel fast. The audio engineers, who only hear the mixed result of their various presentations, report that the control delay is almost unnoticeable, Zwicker says. 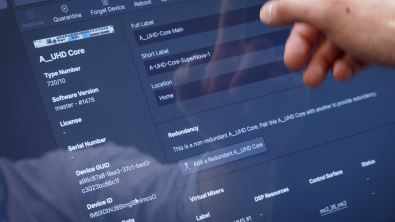 In combination with Lawo’s HOME management platform for IP infrastructures, other concerns, such as signal ownership in a multi-console setup, receiver protection and other features to be announced at IBC are also being addressed. The company reports that the promised integration of all Lawo audio and video products into the HOME environment is now almost complete. Nova73 is among the latest devices added.

Lawo also reports that the trend towards virtualization for geo-agnostic access to processing resources hosted in private cloud data centers is supported by its MCX control software for mc² consoles, which can be virtualized alongside other services in the HOME management platform. MCX acts as the brain of the mixing process, receiving and remembering instructions from a console surface and passing them on to an A__UHD Core. This enables another console to take over if the first one, or the audio engineer, unexpectedly becomes unavailable.