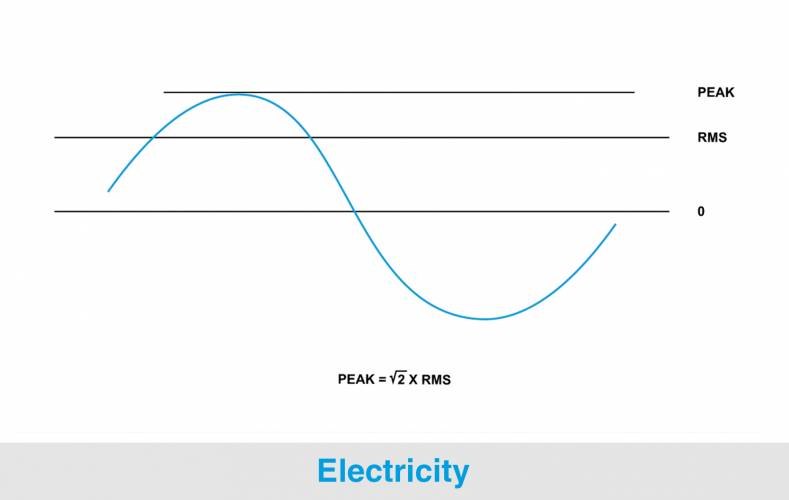 As the voltage of an alternating power source is constantly changing, so must the power delivered into a resistive load. The instantaneous power is given by V2/R and this must be averaged over half a cycle to obtain the effective power. In order to simplify life, the voltage of an alternating current system can be redefined in such a way that the same power is delivered into a given resistive load as would happen with direct current. 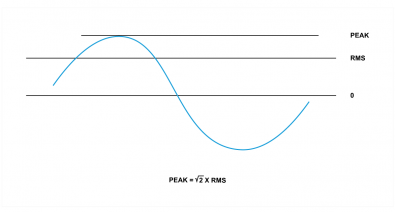 Fig.1. The RMS (root mean square) voltage of an AC power system develops the same power in a resistive load as a DC voltage. Note the peak voltage is 1.4 times the RMS value.

If all loads were resistive, life would be simple, but in the real world, loads can be inductive or capacitive. This means that the current and voltage are not in the same phase, but a phase shift Φ (phi) may exist between them. The power is given by IV cos Φ. There is a special case where Φ is 90 degrees, when the power is zero. This is bad news for electricity companies, because there is a current flowing in the system, causing resistive losses in the wiring, yet no power is being delivered to the load.

The effect is measured using the power factor. Users may be penalized if they regularly apply loads having poor power factors to the supply grid. It may be necessary to perform corrective action at the load by connecting reactive devices that oppose the problem phase shift.

Where higher powers are needed, the solution to the non-constant power is to use three-phase electricity. Three waveforms, mutually at 120 degrees phase are generated. Provided each phase drives an equal load, the instantaneous power obtained by adding the power in the three phases is constant.

Fig. 2a) shows a three-phase system having a neutral conductor. If the load on each phase is the same, the current in the neutral conductor will be zero and it need not be provided, with resultant saving. It follows that the sum of the magnetizations in a three-phase transformer will also be constant. Fig.2b) shows such a device.

Fig.2 left) A three-phase system having a neutral conductor. If the load on each phase is identical, the vector sum of currents at the star point is zero and the neutral conductor can be removed. right) A three-phase transformer. The net flux between the ends of the magnetic circuit is zero and flux in any one limb is the inverse of the vector sum of the fluxes in the other two limbs.

There are various ways of converting other forms of power to AC. The simplest is the alternator, which uses mechanical power and works by rotating a magnetic field with respect to the power generating windings. In most alternators, the power is generated in the stator, so that no brushes are needed to access the power. If an electromagnet is used to create the rotating field, the output of the alternator can be controlled by adjusting the field current.

In small alternators, as used in vehicles, the field current is supplied to the rotating coil by slip rings and brushes. Most vehicles have DC electrical systems and a battery. The three-phase alternator is connected to a six-phase rectifier that converts the AC output to DC. The frequency at which the AC is generated is unimportant, which is just as well as it will change with engine rpm.

The waveform from a typical automotive alternator is far from sinusoidal and may contain high levels of third harmonic. Whilst the fundamentals may be 120 degrees apart, the third harmonics of the three phases will be synchronous with one another. If the alternator windings are connected in Y or star configuration, additional power may be provided connecting the star point to a further set of diodes in the diode stack to pick up the third harmonic energy. 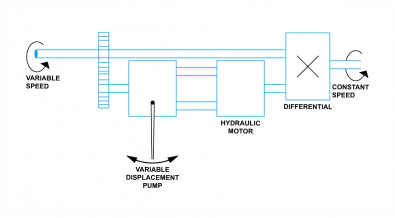 Fig.3 - In a constant speed drive, the hydraulic variable speed path is added to or subtracted from the fixed speed path in a differential so that as engine speed varies the alternator frequency can be kept constant.

The field winding is fed by a voltage regulator, which adjusts the field current to keep the output voltage stable with changes in speed and load. There is an extra complication because if the ignition is put on and the engine is not started, the regulator would apply full field current, which would discharge the battery and heat up the rotor. To prevent that, the alternator generates its own field power using an extra set of positive diodes.

In large alternators, used in power stations, the slip rings are eliminated for longevity. The main alternator is fitted with a subsidiary alternator known as an exciter that is built with the field stationary. Inside the field the rotor turns and generates AC. Within the rotating assembly is a rectifier that turns the AC into DC and feeds it to the main field coil. Using this system the main field current can be controlled by the field current fed to the exciter. There may be a third generator to provide the field power so the alternator can start up with no external electrical power.

In alternators intended to provide AC power, the rpm has to be carefully controlled so that the frequency of the supply stays within limits. In a large power station that is simple, as the turbines are not driving anything else. However, in an aircraft, the engine speed may change according to flight requirements.

One solution used in aircraft is to drive the 400Hz alternators through constant speed units. Fig.3 shows a CSU contains a mechanical drive path, which is added in a differential to a hydraulic drive path consisting of a variable ratio pump and a fixed ratio motor. By changing the displacement of the pump, the motor can be made to turn at any speed forward or backward and so can add to or subtract from the speed of the mechanical drive in the differential.

The development of high speed electronics for signal processing was paralleled by progress in power electronics, where semiconductors have taken over from earlier technologies and the voltage and current levels at which that can be done have steadily risen. Today an electronic invertor can produce AC power from a DC supply at transmission voltage.

Fig.4 - The invertor generator produces bulk DC using a rectified permanent magnet alternator. The AC output comes from an invertor so the speed of the generator can change. The generator only runs as fast as necessary to fulfill the load requirements.

Whereas AC generators must be carefully synchronized before they can operate in parallel, there is no such requirement with DC power transmission. As a result many undersea cables allowing power to be transferred between different countries operate on DC, with a rectifier at the transmitting end and an invertor at the receiving end. The two countries do not have to synchronize their AC systems, nor do they need to use the same frequency.

In conventional AC generators powered by piston engines the engine always has to run at synchronous speed irrespective of the load and this makes the generator inefficient on part load. The inverter generator is one solution to that. Fig.4 shows that the engine drives a permanent magnet alternator whose output voltage is not stabilized. The alternator output is rectified to produce an uncontrolled DC voltage. That DC voltage then feeds an electronic invertor that produces a stable AC output. This arrangement is more efficient because the engine speed can be reduced when the load is light, conserving fuel and reducing noise whilst maintaining the correct output voltage and frequency. Most modern suitcase generators work in that way.

In many systems the loads to be powered are greater on starting than in steady use. Electronic equipment and air conditioners come into that category. The generator has to be sized to accept the starting load, which makes it inefficient when running. The solution is shown in Fig 5. The generator is equipped with a switching regulator that charges a battery. The battery supplies an inverter that is somewhat more powerful than the generator and which can supply the short term starting requirements of the load by taking current from the generator and the battery.

Fig.5- If the inverter generator includes a battery, a much smaller generator can drive loads that require heavy starting currents. The battery provides the starting power and then recharges.

Most small generators are air cooled for low cost and minimal maintenance, but this makes no use of the waste heat from the engine or the exhaust. In a combined heat and power (CHP) system, the engine and the exhaust will be liquid cooled and the heat that would normally be wasted can be used for heating or hot water. The liquid cooling also means the engine can be acoustically encapsulated so that external noise levels can be very low.

Such generators are attractive for outside broadcast vehicles where the low noise level is more important than efficiency. The coolant heat may be shed using a conventional radiator.