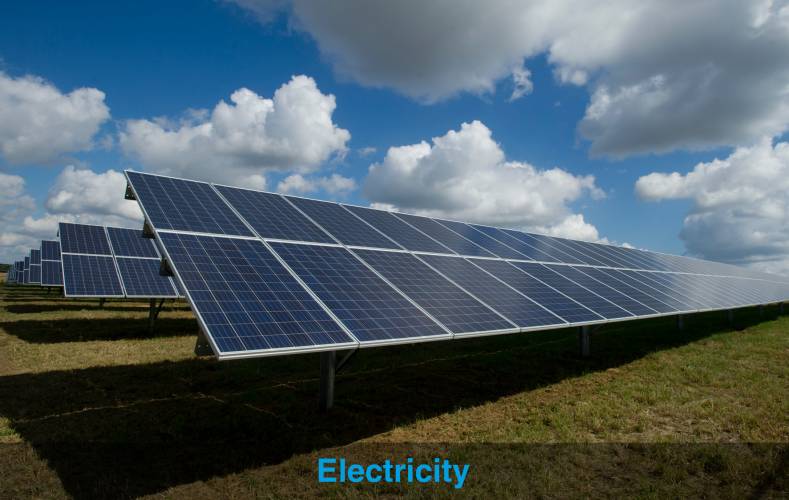 Once the panel has been manufactured, a solar panel is considered sustainable, because the energy it produces does not result in anything on Earth being permanently depleted. It is also considered to be environmentally friendly, because the panel is silent and doesn't emit any waste products.

Solar panels have significant internal impedance, so some of the power they generate is dissipated internally. A load that is impedance-matched to the panel will extract the greatest amount of power. That varies tremendously with the amount of available light, so there is no single load impedance that is always correct. Efficient solar installations use a device called a maximum power point tracker (MPPT).

This is basically a switching regulator that acts as an impedance convertor between the panel and the load. The regulator constantly adjusts the impedance up and down, trying to find the setting that gives the greatest product of current and voltage. MPPT regulators vary in their application. In some cases they synchronize to the local power frequency and feed power back into the grid.

For off-grid and mobile applications the regulator produces a DC output that is compatible with the storage batteries used. They will cut back the power generated when the batteries are fully charged, or in some cases the surplus power can be dumped, perhaps into a hot water tank.

There are also lower cost regulators that do not impedance match, but simply protect the battery against over voltage. They fail to maximize the output of the panels and are false economy.

More than one panel can be connected to a regulator. Provided that all of the panels are oriented in precisely the same attitude and receive the same amount of light, they will have the same impedance and may be connected in series or in parallel or both up to the rating of the controller. Where some panels have a different orientation, they will need their own controller.

The maximum power will be delivered when the sunlight arrives orthogonally to the panel. This is practically impossible to achieve because the rotation of the Earth and the seasonal changes in the Sun's apparent height in the sky would require the panels to be turned in two dimensions.

If the sun is not orthogonal to the panel, the power available falls as a cosine function of the angle between the sun and the panel. In a fixed installation, the panels may be south facing and elevated to an appropriate angle according to the latitude of the location. Much more rarely, the panels are arranged to rotate about a vertical axis driven by a sun tracker.

In a mobile application, on the roof of an outside broadcast vehicle or a motorhome, the panels need to mounted parallel to the roof for practical reasons. When the vehicle is driven at highway speed, the panels see the equivalent of gale force wind even on a calm day and the simplest most robust installation must take precedence over anything clever and more efficient. The imagination can deal with the consequences of solar panels coming off a vehicle in motion.

The cosine effect of panels mounted horizontally is not ideal, but there are some compensations. Firstly, there is no requirement to orient the vehicle with regard to the direction of the sun, because it doesn't change the cosine effect. Secondly, the horizontal panels can never achieve their rated voltage at temperate latitudes, so that more panels can be placed in series on a given regulator without exceeding its voltage limit.

Solar panels are very sensitive to the effects of shading. The part of the panel in shade is not generating power, but it is still contributing to the internal impedance of the panel, so the efficiency goes down. On vehicles, items such as roof mounted air conditioners and communications dishes can shade the solar panels unless the installation is properly designed from the outset. Shade caused by trees and buildings reduces the available power dramatically.

The power available from a given solar installation is determined by the location. Each location on Earth has its own insolation, which is the amount of solar energy that place receives in the course of a unit of time. Whilst the power arriving at the top of the atmosphere is a simple function of geometry and latitude dependent, down at ground level the effects of the atmosphere are very powerful.

Charts are available showing that places having the same latitude can receive vastly different amounts of solar energy according to the degree of cloud cover. Cloud cover can also be seasonal, often blocking more energy in winter.

Energy from solar panels is inconsistent and in off-grid applications they need to be used in conjunction with batteries so that power is always available.

In the summer, the sun is higher in the sky, the days might last sixteen hours and the nights last eight hours. The panels need to generate 50% more power than a steady load needs during the day so the battery can carry it through the night. There may be less cloud cover. That means plenty of solar energy is available, especially as the need for lighting is reduced by the long days. However, as the nights draw in, it all changes.

On a typical temperate zone winter's day, there is an eight-hour day followed by a sixteen-hour night. This means that the solar panel has to generate over three times as much power during the day as a steady load would use. That's over twice as much as in the summer condition, consistent with the day being half as long. To do that in the presence of greater cloud cover and in the presence of a worsened cosine effect is very difficult, especially when longer nights require more lighting.

The solar panel has exactly the opposite characteristic to what is required, producing surplus power when it's not needed and not enough when it is.

The panels themselves may be reasonably green, but batteries come with a huge carbon debt due to their manufacture.

Theoretical calculations about available solar power are problematic because the peak power capacity is seldom reached and the power available in winter may only be a few percent of the rated power. The number of panels required is as likely to be chosen by available mounting space and what can be afforded rather than by any electrical calculations. 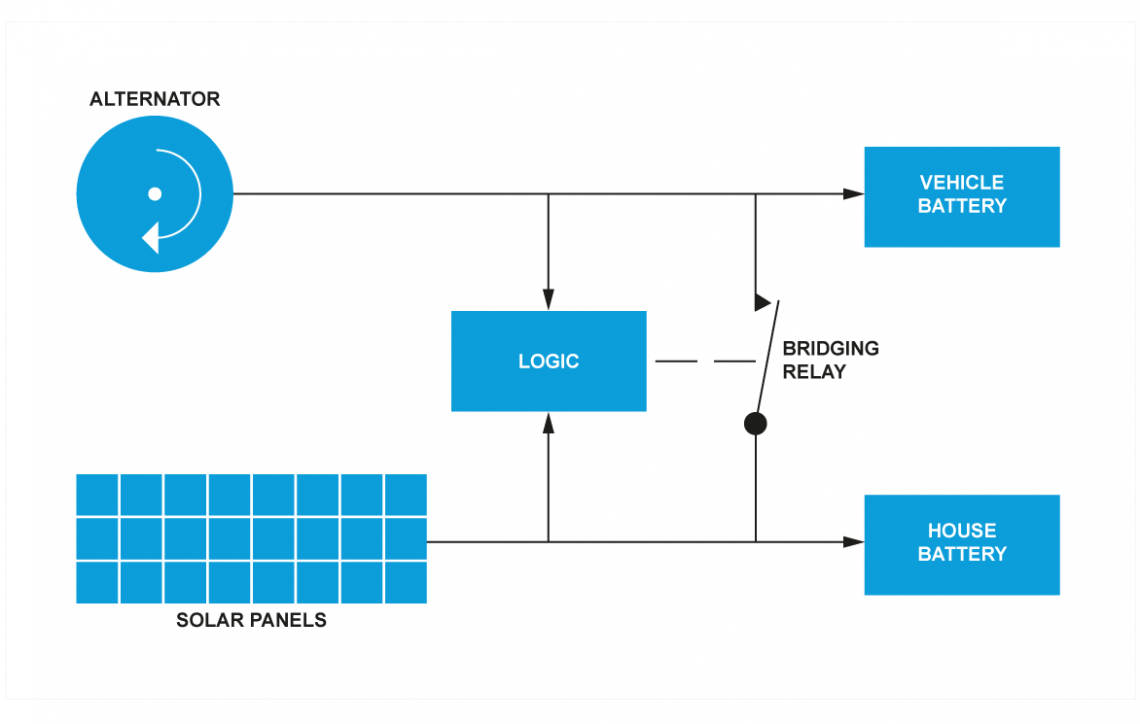 Fig.1 - A vehicular solar power system has separate batteries for engine starting and for other purposes. The two systems can be bridged so that both batteries are charged, but then separated so the starting battery isn't inadvertently run down.

Successful off-grid solar powered installations are ones in which electrical demand has been cut as much as possible. This means not just using the most efficient electrical devices available, but it also requires locating and getting rid of what are known as phantom loads, which are small devices that are left on in a grid-powered house because they individually draw little power. Energy usage has to be adapted to what is available. That may be acceptable in a residential system, but for broadcast purposes things have to work when they are needed and there is little flexibility.

Unfortunately, this characteristic of solar power is inherent and there is no way around it for users in temperate zones. The reality is that solar power alone can seldom provide what is needed on its own and always needs to be used in conjunction with some other power source.

In a fixed off-grid installation a solar panel combined with a wind turbine makes a practical proposition, as the chances of the solar power and the wind failing simultaneously for a long period are much reduced. Wind turbines also work well on small boats, but their use on vehicles is challenging because they have to be stowed away before the vehicle can be driven.

In a traditional motor vehicle the batteries can be charged by the engine when it is being driven, so that power requirements after the vehicle arrives on site can be met by whatever the solar panels can manage with the rest provided by the battery. If that's not enough, a generator will be required, or the vehicle will have to be plugged in.

Fig.1 shows a typical automotive system having a vehicle battery that is for engine starting and a house battery to power on-board equipment. The engine alternator typically charges the vehicle battery directly and the solar panels charge the house battery directly. However there is a device called a bridging relay, which connects the batteries together when either is reasonably charged.