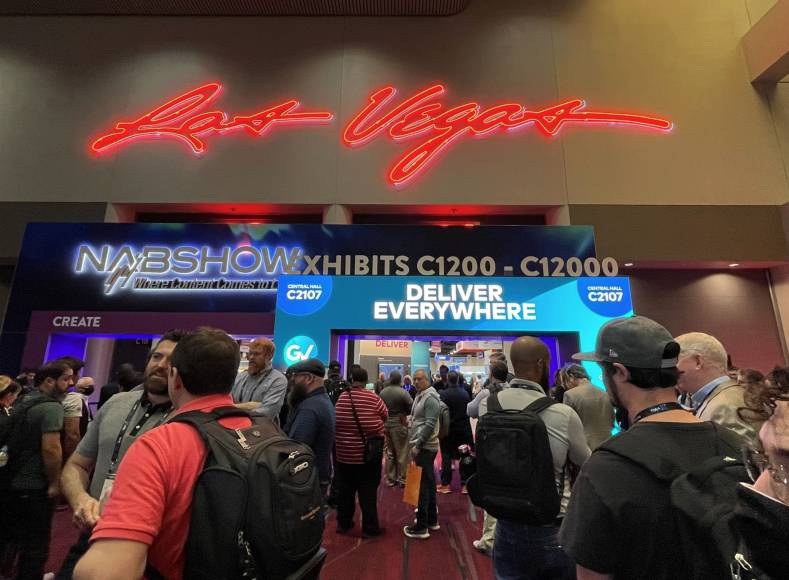 The buzz on the 2022 NAB Show exhibit floor and the BEIT sessions was crisis management, cloud-based solutions, NextGen TV, 5G operability, hybrid as the new normal, and Web3 powered by block-chain and AI. The NAB formed a 12-member National Advisory Council for Web3 with entertainment, tech executives and platform providers to provide insight to the executive team responsible for the NAB Show. Could future NAB shows be all digital? Many NAB visitors are often too focused on exhibits and meetings to enjoy all Las Vegas offers, other than plentiful restaurant dining excellence.

Many cab drivers have told me NAB visitors are the cheapest people to visit Las Vegas next to medical doctors. Forty years ago, the NAB Show overtook the town, and most of the major hotel shows took NAB Show week off. NAB Shows were famous for private hospitality suites and client parties in some of the most famous hotel suites in Las Vegas. Who had time to wander the LV Strip? Times have changed and so has Las Vegas.

Blackmagic Design introduced its revolutionary URSA Mini Pro 12K for digital film with a 12,288 x 6480 12K Super 35 sensor and 14 stops of dynamic range, built into the URSA Mini body. It shoots at 60 fps in 12K, 120 fps in 8K and up to 240 fps in 4K Super 16 and features an interchangeable PL mount. Blackmagic Cloud Pod lets users record onto USB-C flash disks and then use Cloud Pod to make the disk available on the network. The company also announced HyperDeck Extreme 4K HDR, a new broadcast deck with advanced H.265 4K recording featuring a touch screen user interface with built in scopes and HDR screen. It also debuted two new ATEM hardware control panels for all ATEM switchers. 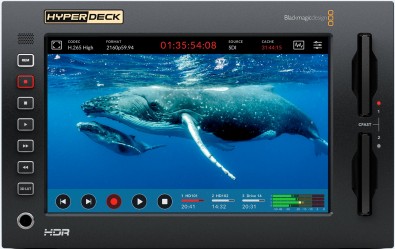 The Blackmagic HyperDeck Extreme 4K HDR does 10x more for 10x less money than its equivalent 10 years ago.

The Cobalt Digital exhibit spotlight was on SafeLink. SafeLink protects live video and audio data over unsecured networks, thereby eliminating video hits or glitches. By using a low latency protocol, Reliable Internet Streaming Transport (RIST), SafeLink provides reliable video transport even in live production environments that may experience network delay, which was awarded a Product of the Year Award from the NAB. Cobalt also introduced a new series of BlueBox Group (BBG) EO/OE 12G mini-converters at NAB 2022. The line-up consists of five 12G versions that include single and dual coax-to-fiber, single and dual fiber-to-coax, and a coax/fiber transceiver.

DekTec showed it latest PCI Express Card modulators, receivers, and ASI/SDI/IP solutions. The company also showed its latest USB Devices such as modulators and RF probes, standalone and OEM IP Converters, RF Tools such as the ATSC 300 Tool Set, and software such as Stream Xpress and StreamXpert, its SdEye and HEVC analyzer.

Dielectric returned to NAB to celebrate its 80th anniversary and introduced its new president. Dielectric owner Sinclair Broadcast Group announced the promotion of Keith Pelletier to President of its Dielectric subsidiary. Keith has been with Dielectric for 25 years. Dielectric debuted a now-available ATSC 3.0 antenna line at the 2022 NAB Show, and debuted updates to its RFHAWKEYE IP-based RF monitoring system.

FOR-A also debuted its FA-1616 multi-purpose signal processor. It supports 4K/12G-SDI/HDR/WCG and Video-over-IP and simultaneous processing of 4K and HD video by using 4 channels together as a 4K processor. It also serves as an IP gateway, enabling up to 32 channels SDI/VoIP conversion with VoIP option.

The big NAB Show news at GatesAir was that Thomson Broadcast signed a definitive agreement to buy GatesAir. The sale is subject to certain regulatory filings and is expected to close in the second half of 2022. Further details weren’t disclosed. In the meantime, GatesAir is celebrating its “First 100 Years in Business.” At the show, the company introduced Maxiva GNSS-PTP, a new timing and signal reference solution for broadcast and telecom facilities that speaks to modern navigation technologies used in second-generation Global Navigation Satellite Systems.

Under the new leadership of CEO Andrew Cross, Grass Valley presented its vision of the future of media production, which is built on its cloud-native Agile Media Processing Platform (GV AMPP). The company made several major announcements including full GV AMPP support of end-to-end NDI. The native integration of NDI into the GV AMPP infrastructure makes it possible to route an almost unlimited number of signals anywhere in the world. Grass Valley also announced a multi-year strategic collaboration with Amazon Web Services. 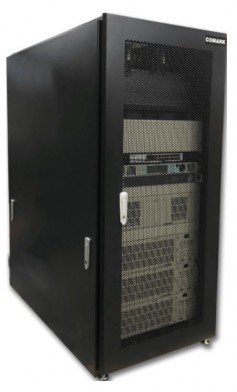 Hitachi Kokusai Electric Comark is celebrating its 50th Anniversary of continuous activity and experience in broadcasting television. At the 2022 NAB Show, the company announced the introduction of the newly improved E-Compact EC700HP-BB3 series high-efficiency air-cooled solid-state UHF DTV transmitters. The “BB3” version is the third generation in the high-powered product line, and it supports the US post-repack channels 14-36. The transmitter is available with a single final power amplifier or up to 12 x PA’s in parallel, producing from 1.1kW to up to 13.2kW respectively, measured after the mask filter.

Also debuting at the 2022 NAB Show was Imagine Aviator, the first cloud-native platform that enables broadcasters, MVPDs and digital-first providers to plan, make and monetize premium-quality linear and OTT content from a single, unified platform. Aviator is a powerful tool for delivering live sports, news, and scheduled and unscheduled live events workflows. The ground-breaking solution is designed to enable media companies to extract the maximum revenue potential from their assets. At the heart of Aviator is Imagine’s “audience-first” ad placement engine, which allows media companies to sell inventory by audience, by context, or by spot, regardless of the platform or delivery mechanism.

A new hyper-density SDI/IP gateway replacement from Lawo was unveiled at the 2022 NAB Show. Courtesy https://lawo.com/lawo-news/

Standby for Part 2, from Meinberg and Net Insight to Vizrt.