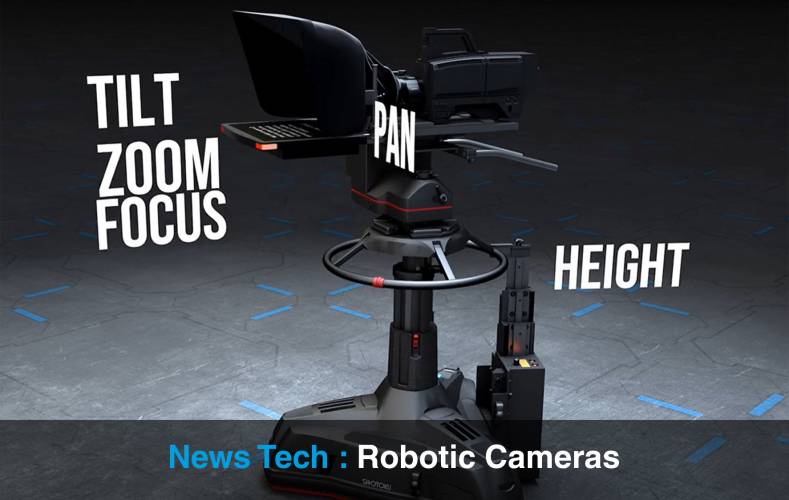 What’s interesting about all TV production is that viewers always compare the quality of what they see on their screens to the multi-million dollar, tightly controlled national network TV content they’re used to watching. Sub-standard camera operation is often the first production anomaly that catches viewer’s attention.

Studio camera robotics are a reliable and practical automatic camera operations solution to get the best camera angles and shots for many budgets. The increasing quality and popularity of PTZ cameras has made robotic studio production available to a much wider market demanding similar professional camera-work results like they see on national TV.

How are Shotoku robotic systems fitted to the camera and tripod? “The robotics heads are equipped with standard 4-bolt flat mounting plates compatible with all mid- to heavy-duty tripods and pedestals, so usually no adaptation is required. Similarly for the camera mounting, there are industry standard thread dimensions and bolts for fixing cameras and teleprompters which will affix directly to the robotic PT head.”

Where are they operated from? “Customers will usually place the control panels in a central control room, often alongside the program director or technical director. In some cases, the robotics operator will sit in a corner of the studio so they can maintain the traditional overview of all cameras, presenters and guests just like a traditional set-up. At the other extreme there are the many customers who will have control rooms spread across the country – studios anywhere in the network can be controlled from anywhere else if the network is in place, providing truly nationwide coverage if required. It’s always down to the customer’s personal choice, and the Shotoku system is able to support any or all of these configurations.”

What type of systems operate the robotic camera? “We have a wide range of control panels / systems. From the extremely simple TR-HP ‘Hot Panel’ which is essentially a joystick with a handful of preset shots only, through the TR-B Basic Panel, TR-S Shot Panel (with 900+ shots per camera capability) right up to the TR-XT which is a full specification panel with PC and touchscreen providing unlimited shots, thumbnail shot recall and multi-shot keyframe sequences for complex on-air moves of XYH studio pedestals like SmartPed. Depending on the robotics being controlled, and the program type, there’s a panel to suit.”

How are they programmed and who is responsible for this? “Regardless of which panel is used, shots are stored by positioning the camera with the joystick until framing is as required. At that point the shot can be stored, either by pressing a button on the panel, or touching an available thumbnail square within the onscreen grid of the TR-XT. At that instant all position data is captured and permanently stored away for precise recall whenever required. The systems are specifically designed for live on-air use so considerable effort goes into making the process quick and easy – no menus or selection required, just hit a button and move on. Training from zero experience typically takes only a few hours, even on the TR-XT systems, to get to a level of competence for on-air use.”

Eddershaw continued “Some customers will have a dedicated robotics operator doing nothing but that, but many will combine the role with other technical roles like camera set-up, lighting and even vision switching. It really depends on the complexity of the program and bandwidth available to the operator. Again, the simplicity of operation is key to enabling the operator to manage multiple cameras and multiple roles with ease, and without mistakes.”

What type of control protocols are used? “We use our own protocol for internal communications between panels and robotics, but we provide several layers of externally accessible protocols for third parties to hook up to. These cover Tally signals (e.g. industry standard TSL UMD over IP), Automation system interfaces such as Mosart/Overdrive/Aveco/Ignite etc., and countless vision switcher/router protocols for just about every popular vendor in those fields. Typically, all these protocols are IP based, although we do also support legacy serial and GPI/O interface too.”

What percentage of local TV stations have automated news studios? “Impossible to say with any accuracy, but among tier-one global national/regional broadcasters who produce live news, sports, current affairs programs I believe well over 80% will be using some level of automation and robotics systems within those productions. This has been the case for many years, broadcasters like the BBC, NBC and many others were using remote cameras in news studios as early as the late 1970s in fact.”

Not including the cameras, what is the average investment facilities spend to automate their TV studios? What should a 3-camera studio station budget for? It really depends on the application. A three-camera set up can range from well under $50k to over $200k for fully robotic pedestals or track systems. The reliability, repeatability, and precision of all these systems ensures a rapid return on investment. ROI can often be well under 12 months, and rarely more than 18 months, so it makes a lot of sense both on a technical and commercial level.

What’s the status of the absolute navigation interface (ANI) rollout? Sales/demos, customer comments? ANI is fully released and is up and running at a few sites in Europe already. It’s so simple to setup yet provides a great added benefit to any SmartPed system within an optically tracked VR environment.

Is Shotoku stronger in robotic studio or manual outdoor crane trucks? “While our line of traditional studio cranes is legendary and defines the highest standard of quality in class, Shotoku offers two crane systems ideal for outdoor applications TK-53 and Graphica. Each crane is available in several lengths (Graphica is available in 7 configurations from 8.2 feet up to 40 feet) offering incredible flexibility. Adding to this flexibility, each crane can be outfitted with absolute encoders allowing teams looking to add virtual graphics to their production an easy (calibrations takes seconds to complete) and reliable system. Graphica comes VR-ready, standard. The defining difference between the two is in their operator interface: TK-53 offers a pan-bar style interface, Graphica offers a pistol grip/joystick interface.” 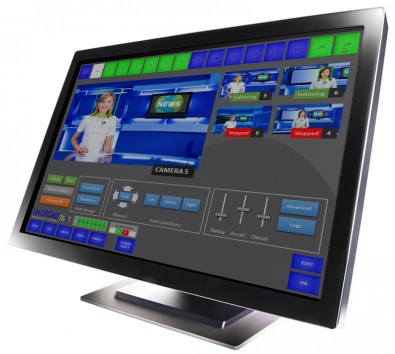 Future new Shotoku products? “Several are in the pipeline which will move us further into both the high-end and budget-conscious ends of the market. More automation and AutoFrame face tracking technology for the high-end systems will raise the bar on operator-less capabilities, along with our developments for smaller, lighter PT heads and elevators which will be ideal for small studios looking for the many benefits of robotics without the inherent compromise of an integrated PTZ solution.

Integration of AI and ML? “This will come as part of the ongoing development of our AutoFrame tracking technology that will eventually allow even large, dynamic, live programs to be managed with a single operator or, potentially, with no dedicated camera operator at all – using face and body tracking, with advanced AI to not just follow a presenter’s movements but predict the next move before it has happened.

RUSHWORKS was founded in 2001 by Rush Beesley, a technology pioneer since the early 1970s. The Broadcast Bridge asked Beesley some similar questions about RUSHWORKS robotic camera systems that often sell with its popular “Channel in a Box” solutions.

How are your robotic systems fitted to the camera and tripod? "The pan/tilt heads have three tapped 3/8” threads for mounting on a tripod. You only use one, determining which is best used in consideration of the weight of the camera and lens. Cameras mount on the adjustable tilt plate which has several slots to accommodate cameras of various dimensions."

What type of systems can operate the robotic camera? "They respond to VISCA commands over an IP connection. So you can use PTZ hardware controllers from several manufacturers, or software control from computer-based production systems."

How are they programmed and who is responsible for this? "You use a joystick to manipulate the pan/tilt head manually, or more typically use the joystick to set, save and recall preset pan and tilt positions."

What type of control protocols are used? "They are controlled by VISCA over IP.”

How popular is NDI for studio cameras? "NDI has revolutionized production by eliminating the need for coax and serial control cables, carrying video, audio and control signals on a single CAT 5 cable. It’s immensely popular in virtually all production sectors."

What percentage of RUSHWORKS customers want to use their own cameras on PTX Universal PanTilt heads vs. customers who want to use new PTZ cameras? "Our market sectors include municipalities, houses of worship, broadcast, entertainment and sports. PTZ cameras are best suited for municipalities, while there is a mix of interest between PTZ cameras and using other cameras on PTX heads. Sports generally require long lenses, so the PTX is ideal for supporting cameras with larger and heavier zoom lenses." 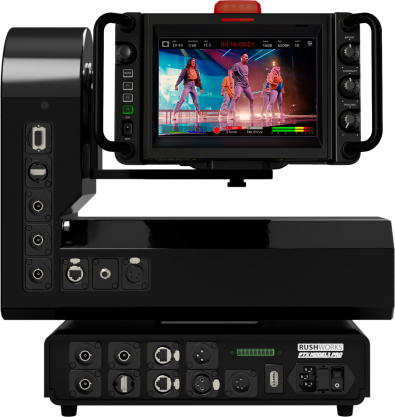 What are the most popular PTZ RUSHWORKS cameras? "Our RWHD/30x is very popular, providing 30x optical zoom with SDI, HDMI and NDI output. It’s unique in the custom firmware we developed that provides 300% more granularity of speed and motion than most competitors – especially at the price point."

How strong is the market and market growth for automated studio cameras? "The market for robotic studio cameras grows significantly every year for many reasons. Given the interesting challenges of maintaining staff over the last couple of years, people have realized they can accomplish more with less by integrating robotic cameras into their production operations."

What benefits do customers realize after automating a news studio that they didn't anticipate? "With the proper selection and implementation of robotics it requires fewer people to create a better result."