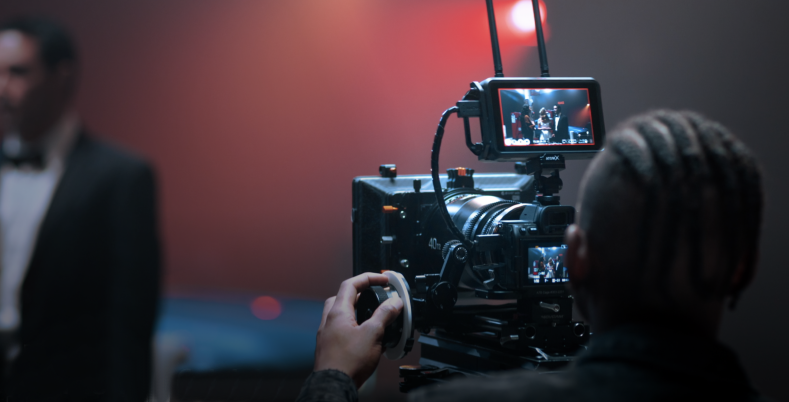 With the advent of camera-to-Cloud recording, will in-camera recording media be relegated to the dust bin of history alongside the Jaz Drive and the Sony Memory Stick? It could soon well be the case, but for it to happen, The Broadcast Bridge’s Tony Orme cites the need for a major change in mindset among industry professionals, a group understandably hesitant to abandon the tried-and true practices that have long paid the bills.

Other articles by Barry Braverman:

Still, the pundits have spoken, and broadcast DOPs will, one way or the other, have to grapple with the challenges of remote image capture in the not-too distant future. Growing increasingly more practical owing to the efforts of players like Adobe’s Frame.io, working professionals across a range of genres must confront potentially traumatic changes in workflow as industry practice aligns with the technological innovation of direct camera-to-Cloud recording and remote storage.

For DOPs then, and content creators in general, the question becomes: Is on-board, on-set recording media, memory cards, and SSDs, relics of a bygone era? 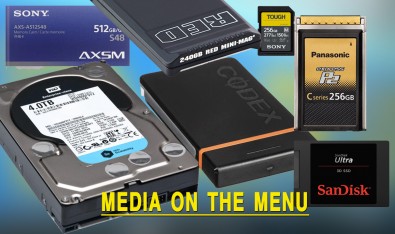 The cost-savings of foregoing memory cards, SSDs, and hard drives, may be offset to some degree by the increased cost of a faster, more robust network and media storage in the Cloud.

Michael Cioni, Adobe’s exuberant Senior Director of Global Innovation for Frame.io, certainly thinks so. By 2026, he says, virtually every professional video and still camera sold will feature a camera-to-Cloud recording capability, utilizing, at least, low-bandwidth proxies. By 2028, thanks to 5G, Cioni foresees global bandwidth expanding sufficiently to capture and upload RAW files in real time. And by 2031, the omniscient Cioni predicts that pro level cameras will no longer feature any on-board recording capability at all! In such a scenario, the camera’s sole storage function will be limited to the massive buffer uploading continually to the Cloud.

It’s not just Cioni or the pundits foreseeing the workflow revolution that lies ahead. The MediaLabs member studios: Disney, Paramount, Sony, Universal, and Warner Bros. – have apparently arrived at the same conclusion as detailed in their strategic objectives document: 2030 Vision for the Future of Media Creation.

Speaking at the Adobe MAX event in New York, Cioni cited the many advances in Frame.io since its acquisition by Adobe in 2021. For the first time, he says, DOPs can enable camera-to-Cloud recording via a simple menu option, and while such a Network Offload function is currently limited to a few professional cameras from RED and Fujifilm, the C2C writing, recording and storage, are clearly on the wall - and in the Cloud. 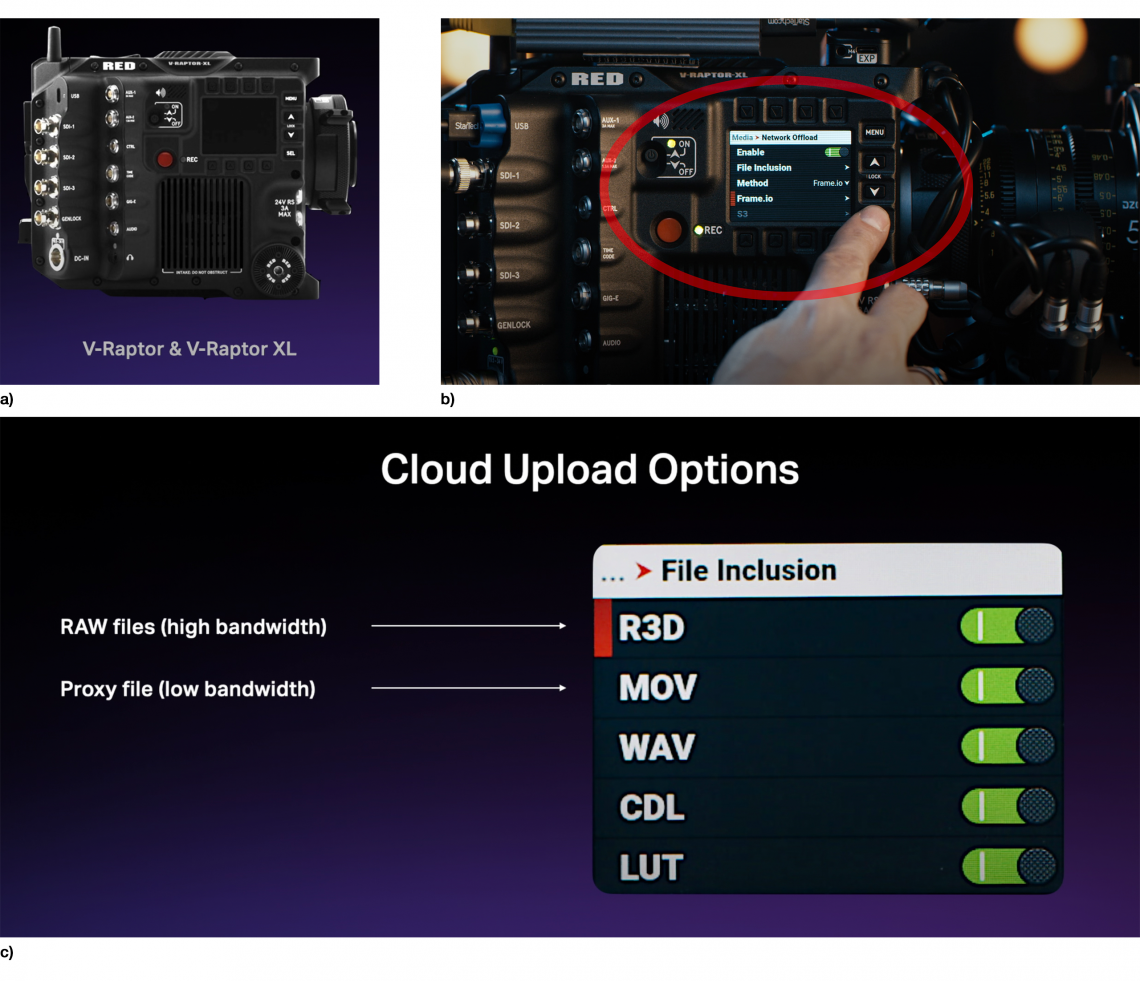 For C2C to gain widespread acceptance, a fast network and a simple workflow are imperative. In the RED Raptor (a), operators enable Frame.io and upload the desired configuration via a Network Offload option in the MEDIA menu (b). Depending on available bandwidth, DOPs have the option of sending the actual RAW camera files (c) or low-bandwidth proxies. Color LUT data may also be sent in the uploaded data stream.

Although infrequent, such fundamental changes in industry practice have happened before: the transition from film to digital and from standard definition to HD readily come to mind. These transitions required the better part of a decade, and in all likelihood, the camera-to-Cloud transition will be comparable as DOPs and production entities consider the merits and feasibility of a C2C all-network workflow.

For producers, eliminating the need to procure, manage, and transport, physical media is a major benefit. I can recall only a few years ago Warner Bros post-production sending hard drives by courier to London, and myself, as a favor on one occasion, carrying 35mm striped mag reels as ‘backup’ to the digital files sent a few days before via Digital Delivery. Once the Studio stopped sending the physical reels and opted to rely exclusively on Digital Delivery, the moans and groans erupted. I can still hear the chorus of complaints from the mixing studio in the UK: Hey! Where’s my stuff? You didn’t send my stuff! So indeed, especially in the upper echelons of professional filmmaking and broadcast, old habits die very, very hard.

Nevertheless, some old habits do in fact eventually die, and this one, obviating the need for physical media would appear to be inevitable. The instant sharing and enhanced collaborative opportunities among far-flung members of a production team are undeniable benefits, as does the ability to provide immediate redundancy and certain security measures like a watermark ID during upload. The time-saving advantages of direct-to-Cloud recording is also obvious, given no longer the need to upload and download terabytes of data from physical media drives.

However, the most compelling benefit of C2C may be something else entirely. The truth is, straight to network recording has greatly expanded the creative opportunities in the type and quality of stories that can be told, especially in fast-paced streaming environments like sports.

Tom Frenette, Lead Videographer for the Golden State Warriors NBA basketball team, cites his ability to deliver up to 30 edited mini-programs to social media while a game is still in progress. Captured with a RED V-Raptor 6K cinema camera, the camera’s footage provides a unique non-broadcast look with a shallow depth-of-field often at frame rates up to 120 FPS on and off the court. Beyond the game action, the story subjects have included everything from locker room frivolities and player banter to spirited fan vignettes, all edited and posted in a matter of seconds, then sent to Instagram and Twitter, and an eager, appreciative audience. 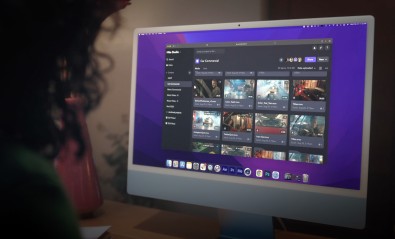 Despite the advances in C2C capability, some form of on-board recording or local storage capability will likely be with us for a while, especially for DOPs working in the non-theatrical realm. One additional not insignificant factor to consider for some potential users: Frame.io is included at no extra cost in their annual Adobe Creative Cloud subscription.

For DOPs and broadcast professionals, a new way of working must be simple and convenient. Any new technology that is too complex or difficult to access will be roundly overlooked and quickly forgotten, regardless of its perceived coolness, supposed economic benefits, and superior feature set.

Recognizing this, Frame.io is pushing camera manufacturers to integrate a Network Offload menu option. Currently, such an option is limited to the RED V-Raptor, but this will soon change, according to Cioni, as additional manufacturers like Sony and Canon recognize the merits of C2C and leap aboard the bandwagon.

As Tony Orme astutely observed in last month’s blog post, top-tier content creators will likely still have remote storage and security given their high stakes world in which they operate. There is also the psychological stress, Orme points out, of one’s creative efforts and livelihood residing in a far-off data center that may be out of sight but never really out of mind.

In the final analysis, whatever workflow is ultimately adopted by broadcast professionals, whether local or Cloud-based or a hybrid of the two, it will come down to the entertainment value of the more compelling stories that can be delivered to viewers, and monetized in the streaming environment.