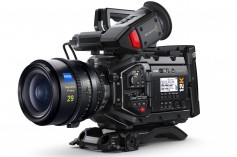 The introduction of Blackmagic’s 12K camcorder raises the question for many DOPs: How much resolution is enough?

Consider this little experiment below: Can you read this? 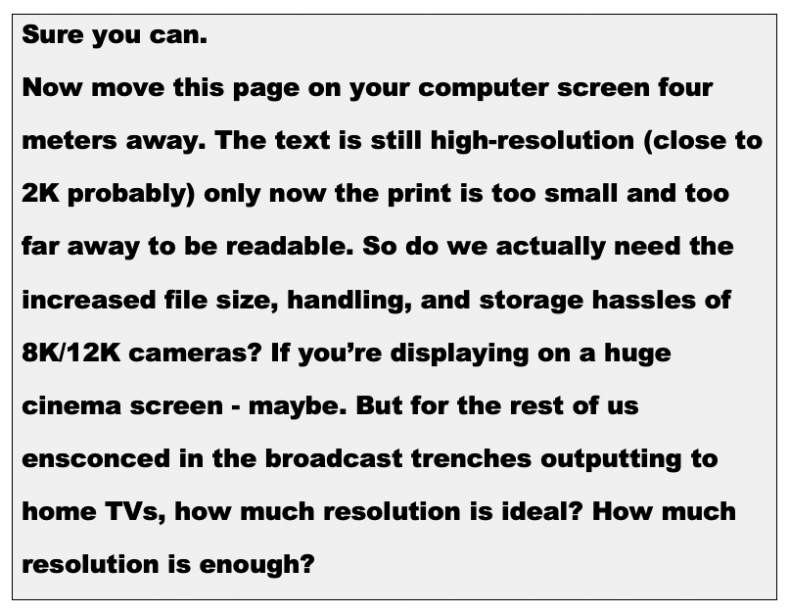 To be sure, for some DOPs and OTT operators, the numbers game rules the roost, as new cameras are increasingly judged these days not on performance or suitability for a project but by which offers the largest imager with the most pixels. American cars and trucks, by the way, were sold the same way: The vehicle with the largest engine was deemed the most desirable – even if only driven to pick up a Budweiser six-pack at the corner 7-Eleven.

Of course, feature films and other programs destined for the cinema must display enough picture detail to fill the large canvas. Lackluster images with poor dynamic range and contrast will quickly alienate any viewer by conveying a cheap, amateur look. The successful DOP understands implicitly: If he or she doesn’t value the story enough to deliver compelling images, why should the audience value the story enough to invest its time and attention?

When speaking of ‘resolution’, we also must speak of ‘contrast’. With improved contrast, the converging lines appear more distinct and higher resolution.

Viewers’ perception of resolution, of course, is determined by several factors, a camera sensor’s native resolution being only one. Of greater importance, surely, is the exercise of good craft, especially how well we capture and maintain satisfactory contrast. High-end lenses low in flare and chromatic aberration produce dramatically better images regardless of a camera’s manufacturer or sensor type. By preventing off-axis rays from obliquely striking the front of a lens and inducing flare, a simple matte box or sunshade can go a long way to improve the resolution of any camera system. 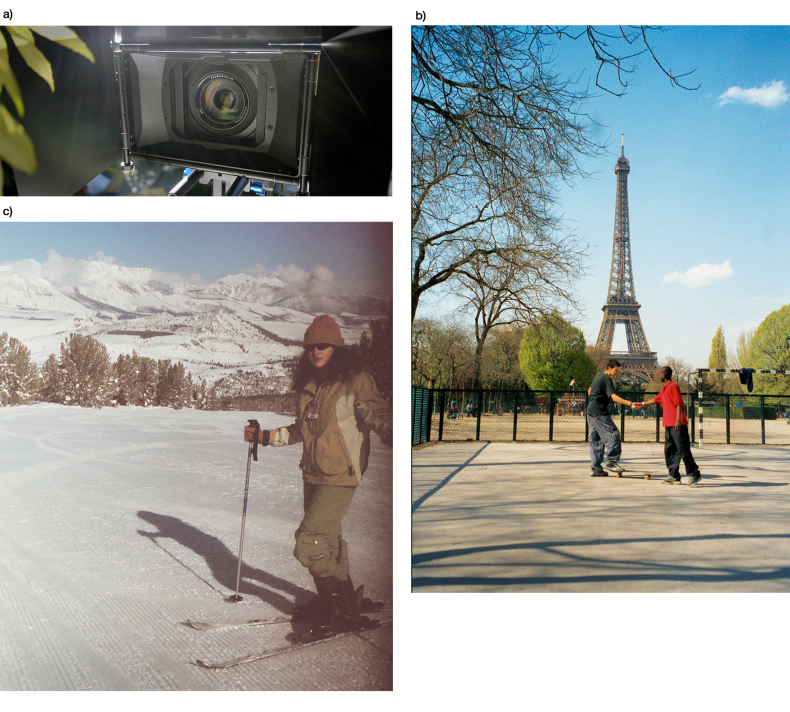 a) Improved resolution in-camera can be achieved simply by use of a matte box to prevent off-axis light from striking the front of the lens and inducing contrast-robbing flare. b) When shooting daylight exteriors, a polarizing filter can substantially improve contrast in the sky and clouds. It is the only filter placed over the lens that can actually increase resolution. c) Avoiding small f-stops can help minimize diffraction aberrations, which increase internal flare and reduce resolution. Shooting at tiny f-stops (at f22 or so on S35mm-format cameras) produces pictures no better than standard definition!

The truth is, in pursuit of the greater aesthetic, DOPs have always been keen on lowering the resolution of the captured image, by applying a diffusion filter or silk stocking to the front or back of a lens, or adding smoke or atmospheric haze to a scene. At a leading news channel in the U.S., the Tiffen DiffusionFX Gold filter is routinely used to reduce the sharpness and age wrinkles in the faces of veteran on-air talent. Indeed, many DOPs, including myself, have built our careers finding just the right amount of resolution-robbing filtration to address the concerns and insecurities of high-profile actresses and television personalities. 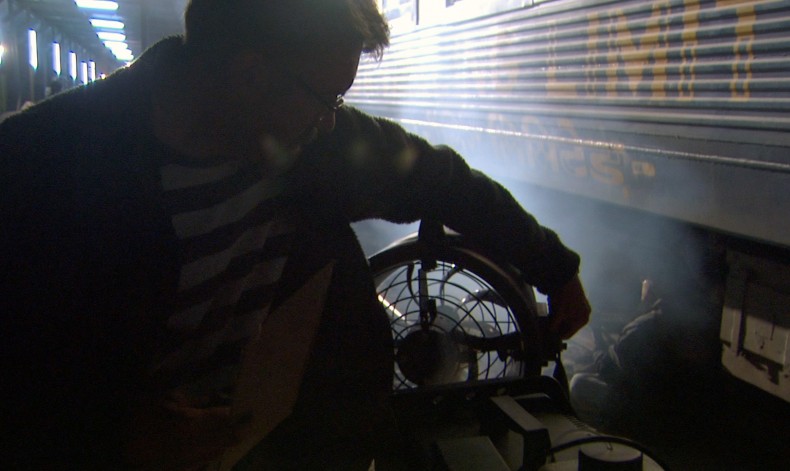 Whether employing atmospheric smoke or haze, a silk stocking, or a diffusion filters, for many of us, capturing lower resolution is our bread and butter! So why are we demanding ever-higher resolution cameras?

Clearly, ever-higher resolution cameras are not all peaches and cream!

Unobjectionable lens defects, particularly chromatic aberrations, that are barely visible in SD or HD can become hugely apparent at 12K, Camera manufacturers, for their part, have acknowledged the issue of ‘suddenly’ underperforming optics by applying one or more on-board LUTs to reduce chromatic aberrations, barrel distortion, tracking and centering problems, and loss of sharpness to the corners of the image field.

Having said all this…

Increased resolution in-camera does have its benefits to broadcasters. For one thing, shooting 4K (or higher resolution) allows greater aspect ratio flexibility in post-production. The ability to crop, reframe, and stabilize shaky footage, with no loss of resolution in the HD output stream, are notable advantages, especially in sports. 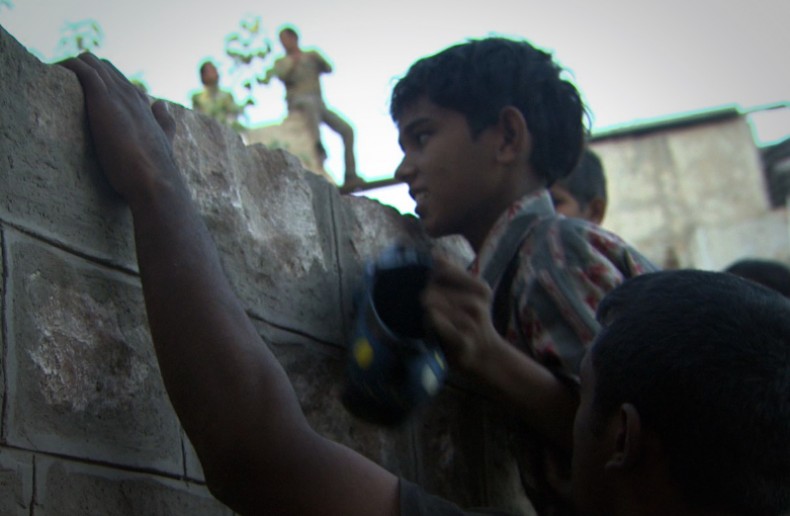 Clipping, compression, anomalies, lens defects. At high resolutions, the viewer sees it all—the good, the bad, and the ugly!

For DOPs, there is also the no-small-matter of the added fineness realized by shooting at higher resolutions. While 1920 x 1080 provides more than enough contrast and sharpness for most television programs given the appropriate craft, camera, and optics, shooting at 4K or higher resolutions can certainly yield a more polished, professional look. Just as originating in 35mm yielded a more professional look when outputting to standard-definition than shooting SD in the first place, so, too, does shooting 4K, 8K, or even 12K, yield a more polished appearance when output to the smaller HD frame for broadcast. 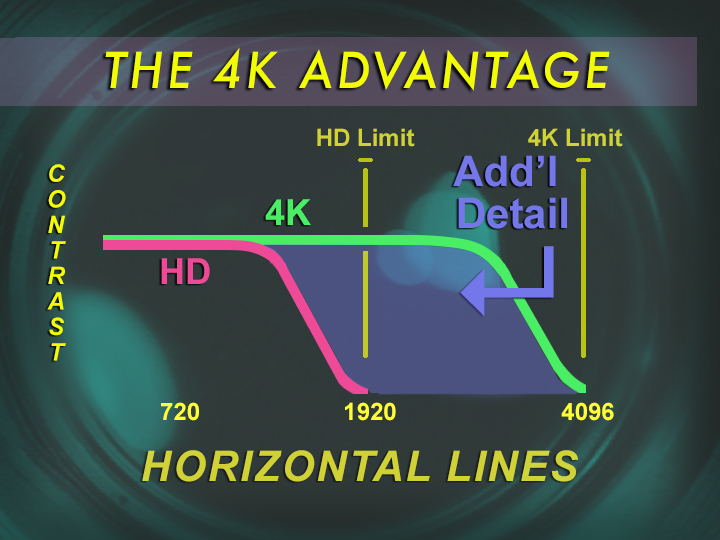 Two curves plot the contrast of HD and 4K-resolution images versus detail fineness. At 1920, HD’s fine detail is maximized, but the lower contrast approaching the cutoff point reduces the perceived sharpness. Shooting at 8K and 12K resolutions for lower resolution release would see an analogous result; the outputted program at 4K, say, would not see the expected lowering of contrast approaching 4096, and thus greater fineness.

Beyond the additional fineness. shooting at higher than normal-output resolution can markedly reduce the noise level as the data from multiple pixels in the larger frame is averaged into fewer pixels in the down-conversion, eliminating the noisy culprits in the process, or at least, making them less visible. Shooting at very high resolution has the desirable effect of reducing noise in the down-converted stream as multiple pixels’ data are consolidated, thus removing single pixel noise in the process.

The larger frame sizes at 4K, 8K, or 12K, also allow a wide-range of advanced algorithms to work their magic. H.265’s 4:2:0 color subsampling would normally be a cause for panic, were it not for the symmetry inherent to the very high-resolution progressive frames. Of course, there are many advantages as well to shooting 8K or 12K.For one thing, we have the ability to substantially crop or re-frame an image and achieve image stabilization with no loss of resolution in the outputted (HD) file for broadcast.

Consider, too, the latest iterations of iPhones that are able to produce strikingly clean and sharp images through a feeble, aberrational 3mm lens. The computational power of Apple software can only be effectively applied in a suitably oversampled, very high-resolution environment, that allows improved contrast, sophisticated noise reduction, remediation of chromatic aberrations, and compensation for a vast panoply of lens shortcomings and distortions.

The latest and greatest, highest-resolution cameras may not be all peaches and cream. Spotted-Dick pudding anyone?