For DOPs, the shift to true light-emissive displays represents a significant development in how audiences view and appreciate our work. Compared to traditional LCDs that utilize a fluorescent bulb (CCFL) backlight, LED TVs have the ability to dim completely, thus enabling deeper, richer blacks with improved shadow integrity – a boon, surely, to DOPs hoping to present their most compelling and inspired work.

As it is, the contrast-robbing CCFL backlights in older LCD TVs have largely gone by the wayside as more recent iterations utilize light-emitting diodes to illuminate the LCD panel. Samsung, for one, utilizes an edge-illuminated strategy in its venerable QLED sets to produce improved tonality with increased brightness and contrast. This hybrid approach does not completely eliminate the need, however, for light to pass through the LCD membrane, so deep shadows can still appear muddy, thus compromising, to some extent, the DOP’s original vision and noblest of intentions.

Of course, true light-emissive displays (without the LCD membrane) have been a part of DOPs’ lives for at least a decade, as pristine OLED viewfinders have largely supplanted the inferior LCD screens in our professional camcorders. The relatively tiny OLED EVFs utilize an organic dye with millions of embedded pixels that can be turned on or off individually. For DOPs, OLED viewfinders have well proven their worth, yielding sharp, high-resolution images, with wide contrast ratios and much better per-pixel accuracy than what could ever be achieved using older LCD or hybrid LED/LCD technology.

Beyond the operational advantages for DOPs, true light-emissive displays are transforming how and where audiences appreciate our work. In commercial movie theaters, large LED screens, like the Samsung Onyx, are making rapid inroads, offering 4K resolution and HDR with a peak brightness of 146fL (500 Nits) - almost ten times the screen brightness of a typical DLP projector-equipped theater. The elevated brightness has the potential to deliver vastly more vibrant, life-like pictures to viewers; the enhanced environment also lending itself to more comfortable 3D viewing – a critical advantage, perhaps, to cash-strapped exhibiters hoping (and praying) to lure audiences back to theatres in the post-pandemic world. 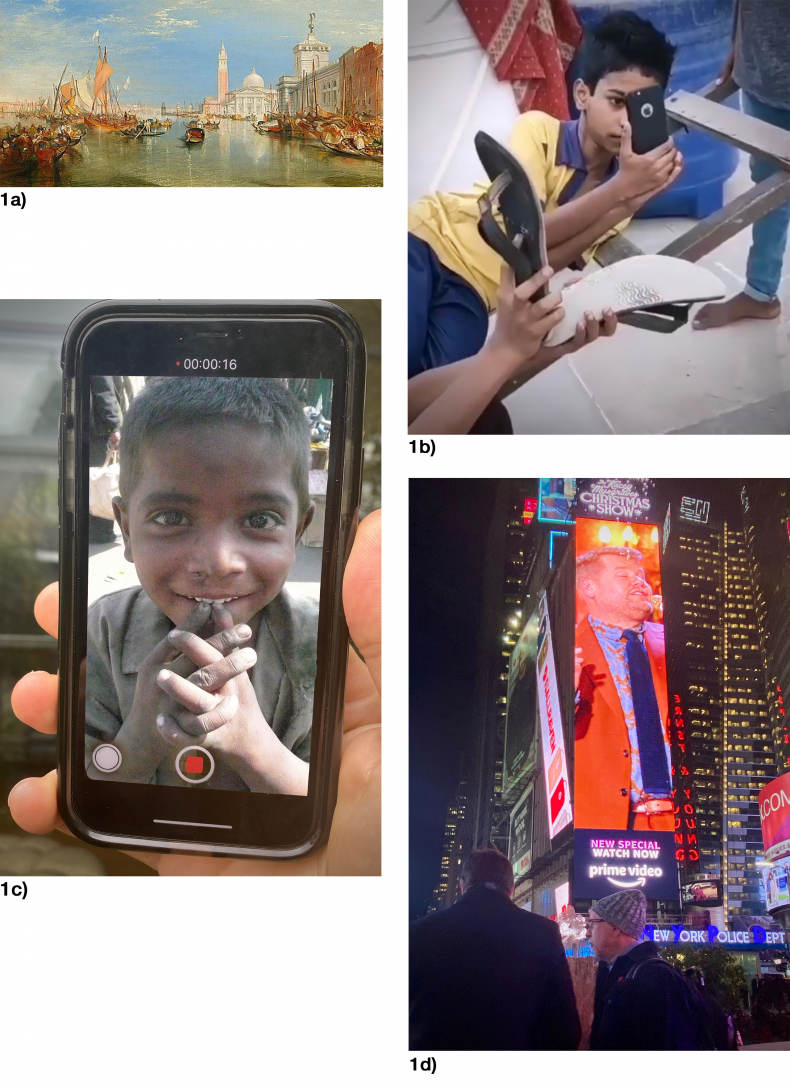 Fig 1a) School of Athens; b) vertical cell phone video; c) vertical composition; d) Times Square. a) The School of Athens. The Rho Factor. The Golden Rectangle. The appeal of 16:9 has been with us for centuries. b, c) Today’s viewers of broadcast and non-theatrical programs are increasingly comfortable with vertical compositions, somethings presented on massive outdoor displays multiple stories tall. d) This Samsung LED display at One Times Square extends 150 feet (30m) up the side of the building!

The relatively controlled cinema environment contrasts sharply with the wild west, uncontrolled environments faced by broadcasters and other non-theatrical presenters. Such viewers might be viewing a DOP’s work at home in a bright daylight-illuminated room with large windows, in a sports arena on a giant screen from a football field away, or in a New York City corporate board room from literally a few inches in front of the screen. Beyond the subtleties of craft with which DOPs are usually obsessed - color gamut, bit depth, recording formats, and all the rest – DOPs in the non-theatrical realm have little control of the bigger picture, that is, how our images are actually presented and reviewed by the viewing public.

Beyond screen brightness and the vagaries of uncontrolled viewing conditions, the one constant in all this, the 16:9 aspect ratio, is no longer a given. Indeed, pretty much anything goes now in the wacky world of mammoth LED displays, with their oddball shapes and sizes, and vertical orientations. Thanks to the endemic rise of cell phone video, vertical compositions are no longer an alien notion. Whether we like it or not, DOPs are being forced now to make some unfamiliar, uncomfortable compromises in how we frame and contextualize our visual stories.

Accomplished DOPs have always strived to create first-class images that captivate our audiences. Exaggerated, vertical compositions aside, DOPs now also face the additional challenge of not knowing the viewer’s approximate distance from the screen. With the ever-increasing size of home TVs, craft-savvy DOPs understand that the distance for viewing our high-end content is a prime consideration. Measured roughly at 10x the pixel pitch, a latest-generation 1.2 micron-pitch LED TV optimally requires a 12-14 foot (3.7–4.3m) viewing distance – a range not always feasible in many homes, especially in Asia and Japan where reduced-size living quarters would ideally require even finer-pitch TVs there.

Unsurprisingly, sub-micron microLED displays garner the bulk of attention from top DOPs and corporate executives who demand the most compelling presentation possible of their visual content. Fisher Brothers, a major real estate developer in New York City, recently installed a Samsung 146-inch microLED Wall in the firm’s main conference room. According to managing partner, Ken Fisher, the display featuring 500nits UHD resolution with a 0.84mm screen pitch was imperative in order to properly showcase its high-end real properties. Every fine detail and nuance are plainly evident in the displayed image. For many DOPs, our work has never been subject to such scrutiny! 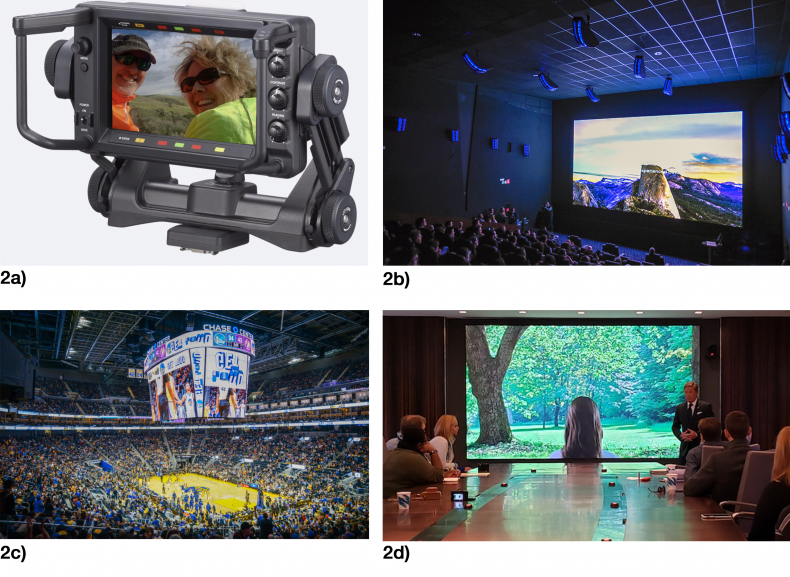 Fig 2a) Sony OLED EVF; b) Samsung ONYX (Madrid); c) Golden State Warriors arena (CA-USA); d) The Wall (Fisher Brothers – New York City).
a) True light-emissive displays like this OLED viewfinder offer superior contrast and shadow detail consistent with the DOP’s intentions during production. b) LED display systems combined with a rigorously controlled viewing environment allow comparable advantages for DOPs downstream. The Samsung ONYX system features a 1.2 pixel-pitch with ten times the screen brightness of DLP cinemas, along with a wider viewing angle. c) For DOPs, major advances in LED displays in terms of brightness, screen size, and versatility, have wreaked havoc in uncontrolled viewing environments at home, sports arenas, and large public spaces. For DOPs, the challenge is to somehow reconcile our craft and all its many nuances with how our work may ultimately be seen. d) Samsung The Wall installation, at Fisher Brothers, New York City.

Contrast this with one dizzying, dazzling look around Times Square with viewing distances of 150 feet or more. The mammoth, vertically oriented LED screens, with a relatively course pixel pitch of 12-16mm, pump out 4000-5000nits from the sides of buildings. What are the implications on the DOP’s craft? What kind of detail and subtlety is even visible from four or five blocks away, and how does all this impact how we creative-types create our images in the first place?

Aside from necessarily being impervious to weather and graffiti attacks, the LED panels in large outdoor displays must be polarized to retain good visibility even when viewed through sunglasses. The transformation of our images in such uncontrolled chaotic environments can wreak havoc on a DOP’s psychological well-being, as the look and feel of our scenes can be profoundly altered in such an environment. The outdoor displays are typically 7X brighter than their indoor cousins. Blasting out thousands of nits by day, these LED behemoths would almost surely burn a hole through a viewer’s retina if viewed indoors. 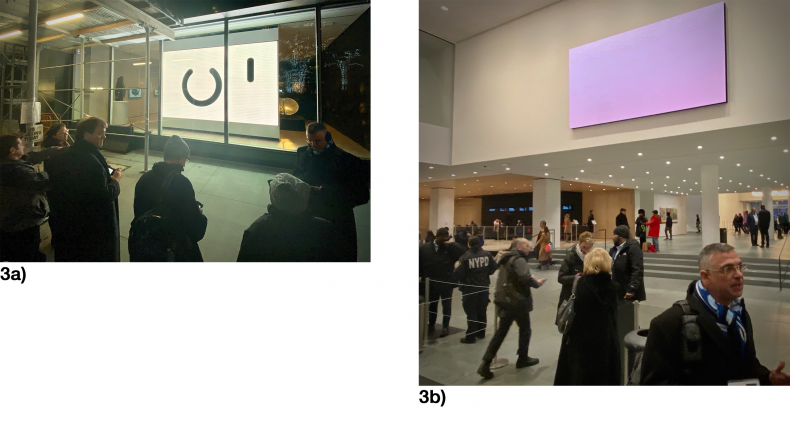 Fig 3a,b (Museum of Modern Art, New York).
If it’s any consolation, DOPs and other artists face a similar quandary as advanced LED TVs are used increasingly to display their work in uncontrolled environments. At New York’s Museum of Modern Art, artists’ work is presented on a public sidewalk, and in the rafters of the main entry hall. How can DOPs possibly anticipate the viewer experience? (And yes, the seemingly blank LED screen above the museum lobby is the art piece.)

Looking ahead, broadcast DOPs will face even greater, more daunting challenges, as more powerful and capable LED displays are developed and deployed for a huge range of viewing conditions. It’s no longer just a 200nit 16:9 rectangle occupying a corner of our living room. These days, our doted-over vertically composed images can be seen anywhere, indoor or out, from the smallest iPhone screen to mammoth displays reaching far into the sky.

Somehow, we have to deal with all this, and adjust our craft accordingly.