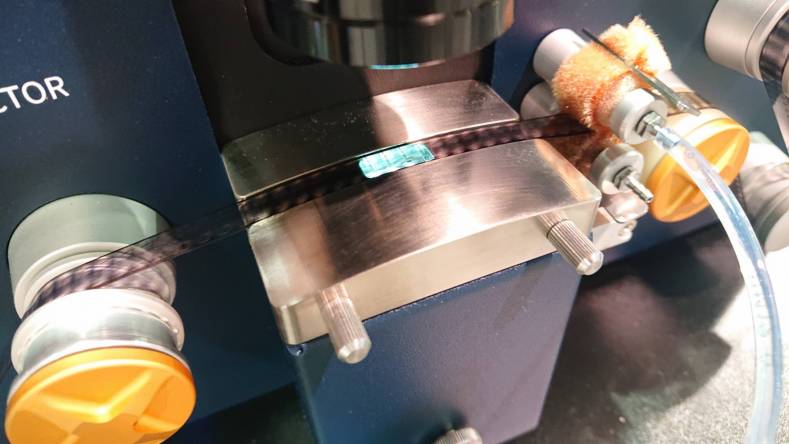 On one hand, film might seem dead. On the other, the last few months have seen a flurry of activity which is emblematic of a wider interest in the field that’s continued ever since the technology fell out of mainstream use. It’s been suggested that photochemical origination is settling into a new normal, and that’s not hard to substantiate.

Let’s look at examples, and there are plenty. In early 2022, Logmar, which had previously been famous for the new-build 65mm Magellan camera, announced its Rockhopper Super-16mm design. Shortly after the NAB show in Las Vegas in April, the same company announced the Gentoo Super-8mm camera. At the show itself, Dutch small-gauge specialists Filmfabriek showed its Pictor scanner with a new wet-gate accessory intended to reduce the visibility of scratches, an unusual level of sophistication for a scanner that was shown handling Super-8mm material.

Blackmagic has continued investing in its Cintel scanner, showing a reengineered light source. Meanwhile, as we’ve seen, organizations such as Cinelab in Massachusetts have been having a fine time carefully maintaining the cream of early-noughties scanning and recording technology alongside a thriving photochemical lab business. Finally, returning to the biggest of the big time, we’d intended to visit Panavision to look at the company’s popular 65mm camera equipment shortly after the Las Vegas show, but couldn’t – because literally every last one of the 65mm cameras based at the company’s storied Woodland Hills facility was out on set, turning film.

This is, to put it mildly, not what most people might have predicted ten years ago.

Some of the enthusiasm for film at the super high end is a concomitant of what we might call the Nolan effect, as if the extravagantly-sized photochemical negative was what made Christopher’s movies so successful. That, alongside the desperate scrabble for sheer gloss that the streaming revolution has provoked, might explain some of what’s going on. The push for maximum resolution and minimum grain that’s intrinsic to huge-format film doesn’t so neatly explain the motivation behind Logmar’s new Super-8mm or Super-16mm designs, or behind the work we’ve discussed before, by companies such as Color by DeJonghe with its RFG process. People like film that looks like film, it seems.

The RFG initialism stands for “real film grain” and it’s exactly what it sounds like; DeJonghe will record digital images out to film, process it, and scan them back in again. Since we covered RFG, FotoKem has begun offering a similar service that it’s referring to as “analog intermediate,” with tongue planted firmly in cheek. Even these processes have required special measures to obtain a more, well, analog appearance. RFG, in particular, retains the option to output the image to a smaller area of the 35mm frame for a bolder effect, and enterprising tinkerers have modified Arri Laser film recorders to accommodate grainier camera negative, as opposed to the intermediate stock normally used, for a deliberately coarser result.

So, even if productions don’t want or can’t have film on set, there’s an enthusiasm for involving it in post production. And that’s not always a decision driven by financial realities; the 2021 release Dune was more than well-enough funded to have used more or less any camera system that cinematographer Grieg Fraser felt the need to use. Fraser chose, though, to shoot it (largely) on Alexa LF and then laser it out to film at FotoKem; the process used Kodak’s intermediate stock 5254 and therefore provoked grain that’s best described as exceptionally subtle. Nonetheless, it involved both real film and the enthusiasm for real film.

Compared to the despair of 2013, when Fujifilm exited the 35mm motion picture negative market entirely, leaving only Kodak to make all the world’s photosensitive artists’ materials, the situation is encouraging.

One wrinkle is that the aficionados are probably not enough to make new equipment practical, at least at the level of the enthusiastic amateur. The world’s stock of historic film cameras will eventually deplete through natural attrition, especially the lightly-built consumer models of the 1960s and 1970s which were designed only to outlast a guarantee period that expired decades ago.

Film cameras are necessarily high-precision mechanical devices, and the world of 2022 is one that has tried hard to move away from precision manufacturing in consumer products, which most Super-8mm cameras were in their day. Logmar has an enviable track record of producing wonderful equipment, but anyone expecting small production runs of new-build cameras – of any film gauge – to be price-competitive with vintage hardware should probably prepare for some sticker shock. Even Kodak’s attempt to release a Super-8 camera, which is rumoured to include Logmar mechanics, has been beset with difficulty.

After a 2016 announcement, a prototype was shown in 2017 and included modern features such as an interchangeable C-mount lens, electronic viewfinder and wider gate for wider-screen shooting (released footage achieves the 14:9 image sometimes called Max-8). Things seemed promising, but as of 2022, Kodak’s Super-8mm camera appears to exist as nothing more than a concept and a small number of prototypes. Affordability is therefore hard to gauge, but prices in the $2500 to $3000 range were discussed. At the time of writing, a Canon 310XL – albeit with vastly less modern features – sold on eBay for a twentieth of that.

The saving grace here is that higher end work has a higher tolerance for higher prices and can therefore afford the engineering that newly-designed, production-ready professional film cameras demand. With some irony, Logmar might find it much easier to replace the spectacular 65mm cameras of the mid twentieth century than it is to replace the Super-8mm options; nobody expects a high-end camera body, one that requires lens sets which cost as much as a house and four-figure rolls of film, to be inexpensive.

Either way, the reputation and popularity of film endures. It’s probably at least as difficult and expensive as it ever was at the film-student level, though the high end, where the exigencies are less severely felt, seems interested enough to keep things moving. Between high-end production personnel and the early-twenty somethings who wander the South Bank of the Thames in London on a warm summer evening sporting classic 35mm SLRs, then, film might even have enough supporters to keep it alive.

So, no, it’s perhaps not too early to think of photochemical origination as the technology that simply refused to die.