The film and TV business is a prominent producer of things that were once very expensive, but which have become much more affordable as developments overtook them. That’s never clearer than when browsing everyone’s favorite auction website, which has recently seen Spirit telecines, once seven figures, selling for less than the price of a good used car. For photochemistry enthusiasts, that’s exciting, though cooler heads might suspect a catch.

Robert Houllahan, co-owner of Massachusetts-based Cinelab, has the experience to analyze the situation. He describes the company as “a full service motion picture lab. We process all modern film stocks, we have five linear processors and we do traditional printing and digital input and output. We have five scanners and, right now, three film recorders.”

Houllahan confirms that while the market for film-related services is necessarily contracted from the decades of mainstream 35mm, there’s enough film work going on, at all levels, to maintain a stable demand. “There’s not dozens and dozens, but probably a dozen places which do some sort of motion picture lab work in the US. I'm always surprised because I find, oh, there's another motion picture lab someplace – someone else crazy enough to do this work in 2021!”

Cinelab runs two Spirit telecines, with a third kept on hand as a parts donor. Houllahan notes, over the dense sound of fans cooling the electronics, that “the Spirits I'm sitting next to had a list price of $1.2 million in 2008, and I know the fully loaded 4K data Spirit was something over two million. That was the starting negotiating price. I believe a fully maxed-out da Vinci 2K color corrector was another $750,000.” As such, the sub-$10,000 deals sometimes seen on auction sites seem a huge bargain, but Houllahan is cautious. “That’s not a complete machine. It’s sort of a red herring. If you want a complete running Spirit, you're probably looking at more like thirty or forty thousand, realistically.” 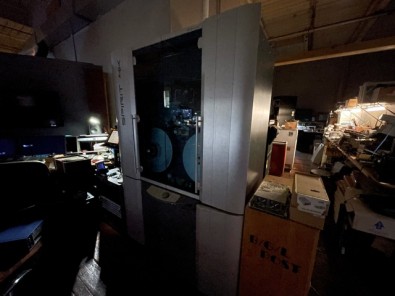 The Spirit telecine is arguably the last and most advanced implementation of film scanning techniques that date back to standard-definition machines of the late 1970s and early 80s, including the Bosch FDL-60 and the Marconi B3410, which was the first design to implement complete digital signal processing. Instead of stopping each film frame and photographing it, the film remains in motion and passes sensors containing a single linear array of photosites, scanning the frame line by line as it passes by. Those early designs used sensors with 1,024 photosites per color, enough to handle spherical and anamorphic formats as well as 16mm and 8mm film, retaining high resolution after pan-and-scan handling of wide aspect ratios.

Even the earliest Spirit, however, was always intended to make high definition pictures. Houllahan describes the arrangement as “a 1920-line monochrome array, and three half-resolution color arrays to make a quasi-HD picture. They didn't have quite the processing power of the new Spirits. The ones I have have 4096 line and 2048 line RGB arrays, and these have scalers in them. If I’m doing HD or 2K they can be set up to be downsampling.” Some recent models uniformly used 4K sensors to produce HD pictures, with the advanced 2K and 4K features hidden behind a passcode.

It was, Houllahan recalls, a transformative design. “The Spirit, when it came out in the 90s, really displaced all the Cintel machines. Cintel had been pretty much the transfer machine from the 70s through the 90s. When the Spirit came out, quasi-HD in the original Spirit, they sold thousands of them, so there are hundreds around the world which you can get. They take a little care and feeding and a bit of setup but they can be a good-running HD-ish telecine. Because of the line array design, you can make more or less as much vertical resolution as you want. You can do VistaVision, and so on.”

Technological development quickly meant that the multiple racks of circuit boards in early models condensed into just a single enclosure, and while they would usually have been used with an external color corrector, the onboard electronics are capable of handling basic color setup to accommodate variations in the film. While 2000s-vintage realtime color correction hardware is perhaps less useful now, it can make basic telecine work gratifyingly immediate, as Houllahan confirms. “Doing film transfers on a Spirit to HD, recording it to a ProRes file, can be fast. You can take dual-link 4:4:4 SDI out of the machine and pipe it through the da Vinci 2K color corrector. I've got defocus boards, and you can do primary, secondary, shapes and whatever. They can do a fraction of the things [modern] Resolve can do, but you can zip through the film very quickly without having to render. It's useful especially if you’re a student film, and there's nothing wrong with 1920 by 1080 resolution.” 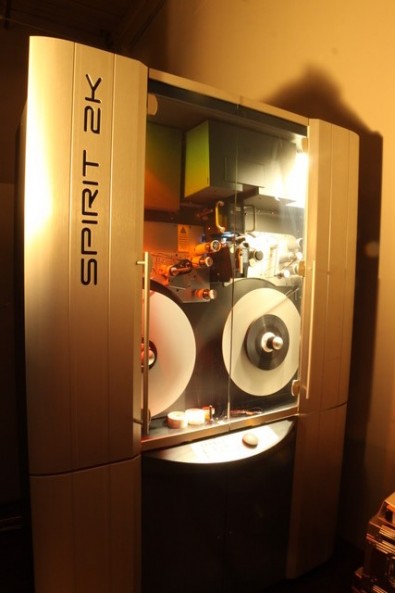 This technology was current during the genesis of digital intermediate, when the concept of recording scanned output as data files rather than on video tape became practical. Houllahan points out, though, that the bleeding edge is not always a comfortable place to work. “When these things were originally built, CPUs were anemic at best. You needed a bunch of custom hardware to even process that kind of data.” Film transfer machines designed to produce computer data were termed datacines, and the Spirit DataCine was prominent for its use on the 2000 release O Brother, Where Art Thou, Hollywood’s first digital intermediate. “They had an early Spirit, which had a [fiber optic] data link that did 2048 by 1556 at eight to ten frames per second maximum. That went through the color corrector and then output to some at-the-time giant SCSI array, which was probably smaller than what you can get in the maximum size iPhone these days!”

In the days before companies like Blackmagic and AJA produced straightforward video data recording tools, the data recording relied on the proprietary Bones or, more recently, Phantom software on a workstation running SUSE Linux. Houllahan considers the software “not particularly clever. When they developed Bones, they said ‘this is going to be your complete DI system. Load your clips in here and do your stuff,’ but nobody ever used it for that. It was clunky, it was no Resolve, no Baselight. It basically had a whole bunch of features that nobody has ever used, and a capture application.” In the modern day, given resolutions that suit an SDI connection, data files can be created more easily simply by capturing the machine’s output using a modern SDI to Thunderbolt converter. 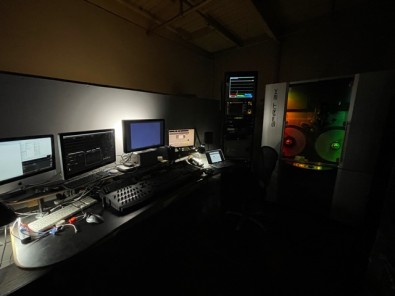 With technology sensor technology advancing so vastly in the last decade or two, a cautious observer might ask whether the Spirit’s design even remains relevant. Sheer speed aside, Houllahan says that “in some ways the Spirit beats the ScanStation, especially at 2K resolution, or any other modern scanner using a single chip, area-scan sensor. That’s not a true RGB image, so the Spirit can win on color fidelity on color negative.”

The drive for ever-better images, though, has pushed Houllahan toward some in-house development. “We've built a scanner called the Xena. I run two machines right now that started their lives as a Rank Cintel mark 3 or Ursa Y-Front. We had all the guts removed other than the film transport and the servo system, and that's been replaced by a box with a camera a lens and on the bottom an LED lamp. The Rank gates have been hollowed-out so there's no lenses in them. There’s a little rack of electronics and software.” 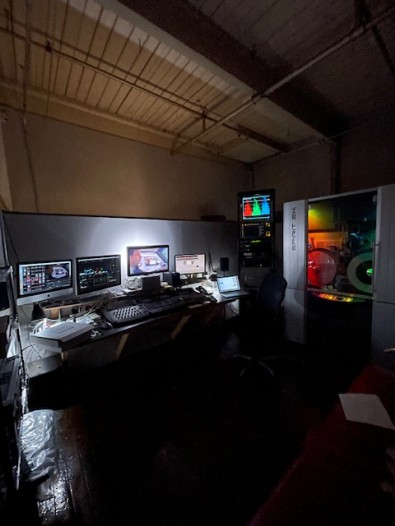 At the core of these machines is some of the latest sensor technology. “I have one machine running the latest Sony Pregia 6.5K sensor,” Houllahan says. “Everyone's switched over to that sensor; it was so much better than the 5K sensor. Sony have just come out with an 8K, 16-bit back-side-illuminated chip and there's a 14K sensor with which we may be doing some large format IMAX scanning.” The design leverages what Houllahan calls “the inevitable march of silicon technology – Moore's law, faster GPUs. The Xena scanner uses three Nvidia Quadro workstation GPUs in an HP workstation. The ScanStation uses two GTX 1080 GPUs. All these machines come down to some kind of film transport, an LED lamp system, whatever the latest sensor in and everything else is math in the computers.”

So, if those sub-$10,000 telecines that sometimes pop up online seem a little too good to be true, they possibly are, given that making all that shiny hardware do useful work requires climbing at least a small mountain of engineering and maintenance. Still, that persistent need for the facilities – and the desire for new and higher-performance scanners – suggests that photochemical processes are enduring, much as many people hoped they would, in stalwart outposts of much-loved and carefully-curated technology.