So you’re a producer, and your cinematographer is campaigning for the use of anamorphic lenses. Problem is, they’re expensive, and for people who aren’t cinematographic propeller heads, it can seem hard to justify. Let’s look at what’s going on and how we got here, without assuming the reader has a masters’ in cinematography.

Anamorphic lenses’ popularity, perhaps ironically, has absolutely nothing whatsoever to do with their original purpose. The term comes from a Greek term meaning transformation; in cinematography it refers to the technique of compressing an image horizontally, so that things look unnaturally tall and thin when they’re recorded on a film negative. We don’t very often use film negatives any more, of course, and clearly we don’t want everything to look unnaturally tall and thin when the audience is watching it. The original idea was to reverse that compression effect in the projector, for an extra-wide image. We now do that digitally in post production, but either way, it’s natural to ask exactly what benefits arise.

What people like about anamorphic lenses are, perhaps ironically, things that their original designers would certainly have considered faults. That’s true even to the extent that modern anamorphic designs are being carefully configured to produce many of the same – what’s the polite term – effects as their forebears of the last seventy (yes, seventy) years.

The earliest anamorphics predate synchronised sound, dating from experiments in France in the earliest years of the twentieth century. The idea of squeezing a picture horizontally was originally developed for periscopes in early tanks, allowing commanders to take in more of the battlefield at once, but they were applied to short films before World War Two. At the time, the technique failed to catch on, perhaps because it required special provisions in the cinema to uncompress the image, making widespread distribution difficult.

The first general-release feature film to use anamorphic lenses didn’t emerge until 1953, a move provoked by the widespread consumer adoption of television. At the time, both cinema and television used a frame very much the same shape, and many feature films were in black and white until the 1960s. While TVs of the time had tiny screens, film and cinema might be thought of as looking somewhat similar, even though film had massively higher resolution. It was, perhaps, an early hint that resolution isn’t hugely important; in cinema terms, spectacle matters.

Modern, large-format and other unusual sensor sizes have demanded new lens designs, including anamorphics to accommodate them.

And spectacle, in the 1950s, meant wider screens designed to occupy more of the human field of vision. The most straightforward approach was simply to make the film wider, something we still have access to in the form of two 65mm formats and VistaVision, which turns conventional 35mm film on its side for a wider frame, double the picture area and therefore double the resolution. These approaches were (and are) expensive and cumbersome, though, and the people paying for it demanded a less costly solution.

One such solution was to use conventional 35mm film, cropping the image top and bottom. That’s the approach used for non-anamorphic, conventional filmmaking, producing a frame close in shape to a conventional HD television picture. Cropping enough to create the extra-wide frames demanded by 1950s filmmakers, though, would exclude so much film area that the resulting image risked being grainy and soft – a dealbreaker for a system designed to wow audiences away from home entertainment.

So, the purpose of anamorphic compression is – or was – to fit a wide image into a not-so-wide piece of film while still using all of the available film area.

The optical designs of the time were, compared to modern practice, primitive, although as we’ve seen that’s become a sought-after characteristic. Various companies tried various approaches to building lenses to achieve the required compression under impressive titles like Ultra-Panavision (which used 65mm film and anamorphic lenses), Technirama (a variation on VistaVision) and CinemaScope, which became a trademark of 20th Century Fox. During that mid-century burst of innovation, the degree of compression applied and the underlying film format varied.

Clearly, film distribution couldn’t accommodate different projection equipment for dozens of options. The one which survived involved two-to-one compression on conventional 35mm film, so that a circular object photographed in reality would be half as wide as it was high on the camera negative. The only extra equipment was a different camera and projection lens. Most designs use a special compressing lens element in front (or less often behind) an otherwise conventional lens. That compressing element is often called a cylindrical element, because its surface is a section of a cylinder as opposed to a section of a sphere as with most lens elements. For this reason, non-anamorphic lenses are sometimes called spherical.

The design approach is often very literal, with lens manufacturers sometimes reusing parts of their existing spherical lenses for anamorphics, or basing designs on off-the-shelf stills lenses. Modern experimenters even approximate anamorphic lenses by combining parts of old photographic primes and anamorphic projection lenses; it can be surprisingly effective, albeit a subject for the workshop tinkerer more than the rental house.

Probably the most famous anamorphics currently in use were made by Panavision. That’s possibly because of the tendency of films shot using the company’s lenses to be branded “Filmed in Panavision,” although “Panavision” always referred to a company, unlike terms like “CinemaScope” and “Technirama” which were specific to a photographic process.

The cylindrical element is at the front of this lens; occasionally they're at the back, which changes behaviour.

The two most archetypical characteristics of anamorphic images are that light sources may produce horizontal streaks of light, and that things in an out-of-focus area, often the background, may appear vertically stretched. The classic blue and pink horizontal lens flares for which anamorphic photography is probably most famous are produced by Panavision’s C and E series lenses, which remain in huge demand to this day. Out of focus fairy lights, meanwhile, turn into vertical ellipses, as opposed to circles (some designs, where the cylindrical element is at the back of the lens, differ). Regardless, the extra pieces of glass add various amounts of aberration, soft-focus artefacts and flares on top of the behaviour of the underlying spherical parts.

It’s worth revisiting the idea that none of this was the intention or purpose of anamorphic when it was developed. These are side-effects, and ones that the inventors of the system would have been at pains to avoid. Early in the development of anamorphics, for instance, it was difficult to shoot closeups, because the compression factor could vary toward edges of the frame, causing unfortunate actors placed far to the left or right to look broader than they properly should. That issue was quickly fixed in subsequent designs, but the other artefacts persisted to modern popularity.

More crucially, if a wide frame is all we want, many modern digital cameras have more than enough image quality to simply crop and zoom in. Nobody’s specifying anamorphics as a tool simply to create a wider image. Spherical lenses are generally smaller, lighter, cheaper, sharper, let more light in (requiring a less sensitive camera, or less light), focus closer and are more convenient for visual effects work because they produce fewer hard-to-match distortions. None of these problems is insurmountable, but absent any other consideration the purpose of anamorphics in the modern world is for the look, not the convenience. 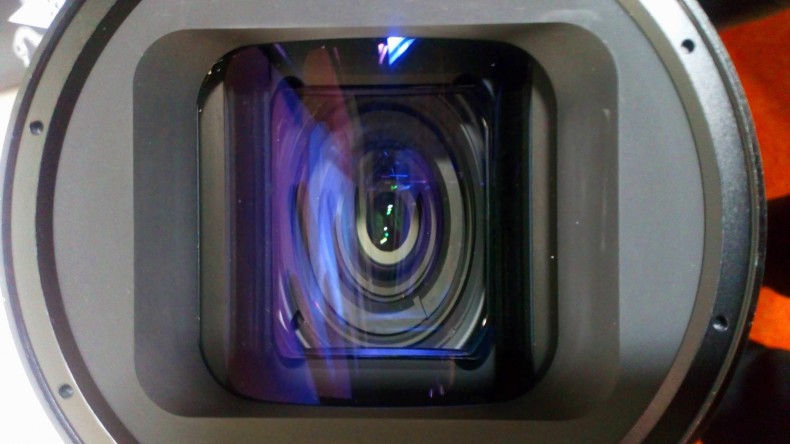 The horizontal compression effect is clearly visible on this anamorphic lens.

And, as with different-sized film formats of the 1950s, there are a variety of camera formats in 2021 which have provoked different anamorphic lens designs. Originally, that two-to-one compression factor took the squarish film frame and made it widescreen, but modern cameras tend to have wider imaging sensors anyway. Some cameras are available in variants with sensors matching classic film frames more or less specifically to accommodate anamorphics, but most cameras still shoot a widescreen, 16:9 frame by default. Put a 2:1 compression lens on that sort of camera, and the result is too wide to be really useful other than in special circumstances. More exotic cameras with larger-than-average sensors demand lenses which project much larger images and may have sensors of almost any shape.

In response to this, anamorphics with lower compression ratios have been developed, often with 1.33:1 compression to allow a widescreen 16:9 sensor to approximate a CinemaScope frame. The problem is that the reduced compression factor often reduces the exotic optical effects that many cinematographers actually want in the first place. Some designs have used specially-coated lens elements designed deliberately to provoke brightly-coloured flare, which is the opposite of the usual purpose of lens coatings. Also, inserting an elliptical aperture behind the actual adjustable iris can simulate those elliptical out-of-focus lights, although that doesn’t always work when the iris itself isn’t fully open. Those workarounds are rare on the sort of equipment used for major film and TV productions, but might show up on a music video or short film.

That brings us more or less up to date. It should be clear that there’s a huge and vibrant history to be aware of, and a connection to that history is something that even the most hard-nosed practitioners of film and TV value.

Modern cinematographers choose anamorphic because it is expressive. The technology with which we make movies is now so good, in a purely technical sense, that it risks being samey; clinical; inexpressive. That realisation goes some way to resolving the apparent contradiction of adulterating the cleanliness and precision current technology with the comparatively imperfect tools of decades ago, whether that’s anamorphic or something else. If we don’t want to work in an industry where one production can be easily mistaken for another, cinematographers need access to all the tools in the arsenal.