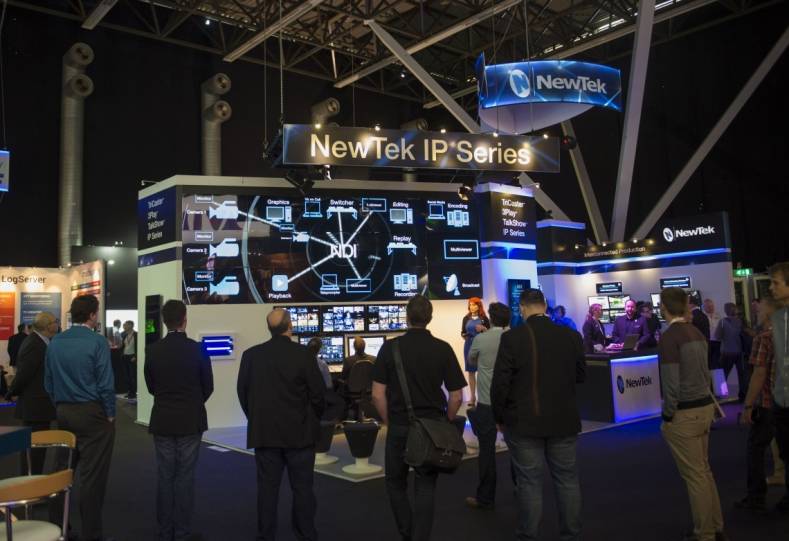 NDI technology was not only at NewTek’s IBC exhibit, it was seen throughout the exhibit halls.

Everyone wants to migrate from SDI to IP production, and NewTek has provided the technology to do it—for free!

If the move to IP-based production was the marching order at September’s IBC convention, NewTek’s NDI (Network Device Interface) seemed to be the drummer, with dozens of companies announcing they are using it to translate SDI (Serial Digital Interface) video into IP (Internet Protocol) video. The cost savings of switching from SDI to video over IP, along with the benefits of bi-directional communication and packetized data delivery have long been a tempting lure, and, after all, that’s the way all computer devices talk to each other already.

But NewTek made the temptation even more irresistible by giving away the SDK (Software Development Kit) for their NDI technology for free.

“The adoption of NDI has certainly exceeded my expectations widely,” began Dr. Andrew Cross, president and CTO of NewTek. “But I think a lot of people are missing one of the most exciting aspects of the move to IP, and you might be surprised to hear it. I think having multiple standards for AV-over-IP is a wonderful thing. What a lot of people miss is that the only really important standard is IP itself, and not the specific flavor of the data that is going to be flowing over IP.”

That unexpected praise for multiple standards of a new technology may take a bit of explaining. The concept of moving toward an IP-based infrastructure has been around for several years. At NAB 2015 Evertz proposed one solution called, “Adaptive Sample Picture Encapsulation”. By IBC 2015, together with For-A, Ross, AJA Video Systems, ChyronHego, Sony, Tektronix, and Vizrt, the ASPEN Community was formed.

Every Yin needs a Yang, of course, and by last December, Grass Valley, Cisco, Snell Advanced Media, Lawo, EVS Broadcast and Arista Networks had formed a trade association going after a similar goal under the name of AIMS (Alliance for IP Media Solutions).

A key difference between the two groups’ approaches lies in the way they handle video synchronization. The AIMS method is based on SMPTE 2022,  in which the signal timing comes from implementing IEEE 1588 Precision Time Protocol to generate RTP (Real time Transport Protocol) and RTMP (Real Time Messaging Protocol) timestamps. ASPEN utilizes a proprietary method developed by Evertz that is based on MPEG-2 Systems (ISO 13818-1), in which the  audio and video streams are synchronized with an embedded system clock running at 27 MHz employing a 90 kHz counter that is part of an adaptation header.

If you think all that sounds confusing, consider that many of the member companies have joined each others’ groups. But one point is consistent. As of now, both AIMS and ASPEN’s approaches deal with uncompressed audio and video. Only NewTek’s NDI takes advantage of compressed signals. And, of course, it is available here and now, and free. 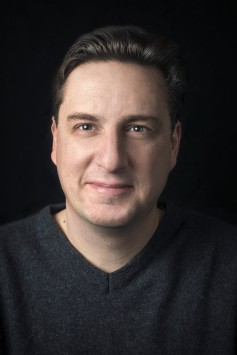 Dr. Cross says his reasoning behind welcoming multiple standards is that the world is already connected via IP. On that superhighway we have JPEG, PNG, XML, JavaScript and Python and other data formats all coexisting with each serve their purposes.

“But it’s IP that is the standard, and that allows all kinds of companies to experiment with different data formats,” he explained. “Something like that is probably going to happen in our video industry, and that fosters innovation.”

In fact, Dr. Cross wants to be clear that NewTek is an enthusiastic supporter of both AIMS and ASPEN. He just points out that most buildings today are already wired for gigabit Ethernet, which is ideal for NDI. The others are still shooting for uncompressed IP that requires10 gigabit Ethernet, which may take a while to install.

I think having multiple standards for AV-over-IP is a wonderful thing. What a lot of people miss is that the only really important standard is IP itself, and not the specific flavor of the data that is going to be flowing over IP.

“NDI is designed to work on the infrastructure most faculties have today,” he said. “That’s probably why it was seen on so many pieces of equipment at IBC.”

Dr. Cross says the true story of NDI’s origins haven’t been told to the press before. “About 10 years ago we were messing with IP video to mirror the screen of our original standard definition TriCaster on a computer over a 100 MB Ethernet,” he said. “We wanted graphics companies like Chyron to be able to interact with TriCaster over our proprietary standards which we would give to them at no cost. Eventually about 40 companies could send video over IP, but only NewTek could receive it.”

The seed was planted in fertile soil.

“I was out walking one evening, and it came to me that we had developed a community of IP communication but it was all stuck in a bubble,” Dr. Cross remembers. “So let’s pop that bubble and give away this IP technology to anyone who could use it. It will help everyone, and in doing so it will also help us.”

Unexpectedly, the first to sign up for the SDK give-away were people in the VJ (Video Jockey) and gaming space since they depended heavily on video streaming. But soon graphics companies like Vizrt and ChyronHego came on board, and now, looking at the amount of NDI implementation at IBC, mainstream video production equipment has followed with gusto.

NewTek doesn’t have a complete count of how many companies have downloaded the free SDK for NDI.

“The success of doing this is making the technology reliable for people today,” Dr. Cross said. “In fact, we have already announced NDI 2 which added 16-bit color support and ‘fail-over’ in case a camera or switcher bank goes down. By working this way we have the ability to push IP video adoption faster and that is our whole intent. Our industry is at the very beginning of this revolution, and we want to help move it forward.”