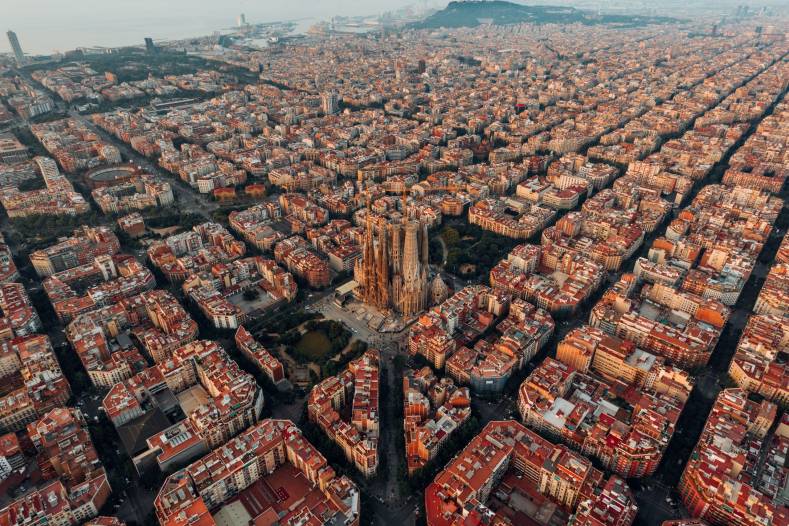 Mobile World Congress is back as a major physical presence at the Gran Via in Barcelona for 2022.

Mobile World Congress has come back as a full hybrid event with a substantial physical presence in 2022 after its absence in 2020 and skeletal form in 2021, with around 55,000 attendees in Barcelona, coupled with an even larger number of online delegates.

The show as usual is dominated by gadgets, gizmos and wireless technology, especially for WiFi and 5G, but video streaming is the elephant in the room behind all of these. On the one hand, the higher capacity and performance of 5G is driving both consumption and production of video around mobile devices, especially smartphones, while at the same time rising demand for access to streaming services on the go, at ever higher quality, is propelling innovations in display and transmission technology. Smart phones launched during MWC 2022 feature technologies such as AMOLED (Active Matrix Organic Light Emitting Diode), combining OLED thin-film-display technology where organic compounds provide the electroluminescence, while active matrix enables more even brightness and colour by attaching each pixel to distinct transistors and capacitors for active control of their state.

These trends are reinforcing each other to sustain or even accelerate growth in mobile video traffic, and with smartphones generating or consuming about 97% of this, it is not surprising they are dominant at MWC 2022. The monthly global average usage per smartphone will rise from 11.4GB by the end of 2021 to 41GB by the end of 2027, according to Swedish mobile infrastructure giant Ericsson. While video traffic currently accounts for 69% of this now, Ericsson reckons it will have reached 79% in 2027.

This trend has been accentuated during the Covid-19 pandemic, with US telco Verizon estimating that video streaming traffic soared by 26% during lockdowns. Yet there is little sign of that rate of growth slackening much as the pandemic eases in many nations with a gradual return to earlier habits and behaviour, even if there continues to be more homeworking. This raises a question for mobile operators of how to derive revenues from their expanding 5G infrastructures as more users consume video at ever higher bit rate and qualities.

That question has been discussed at MWC 2022 and one answer for some cellcos (cellular operators) lies with deployment of Fixed Wireless Access (FWA) services as alternatives to wired broadband over coaxial cable, telco DSL or fibre infrastructures. FWA was first deployed over a decade ago using the now virtually extinct WiMAX wireless protocol, followed by 4G, but it is only with 5G that it becomes a serious contender for high-speed broadband at guaranteed bit rates up to 100 Mbps or more for individual households. FWA is delivered over the same cellular infrastructure as mobile services but on a fixed point to multi-point basis to receiving equipment attached to a premise, much like a satellite dish or digital terrestrial antenna.

Operators in many countries are now deploying FWA in three different scenarios, the most obvious being to deliver high speed broadband in areas unserved by any wired alternative, which is most often the case in remote lowly populated areas, especially in developing countries but also rural parts of North America, Europe and leading economies elsewhere such as Japan and Australia. This use case attracted the earlier FWA deployments, but now under 5G FWA is starting to be competitive in a second scenario, where cable or telco DSL alternatives are available but quite expensive, enabling cellcos to come in with competitively priced offerings.

The third scenario for FWA is the most surprising, in more urban areas where fibre to the home (FTTH) is being built out, but has not reached every premise, or where there are some areas where it is costly to deploy because of the terrain or street construction. In some such cases FWA is starting to make an impact, for although it cannot match the capacity or bit rate of fibre, it will still often be good enough to deliver several simultaneous channels of UHD video. For cellcos it brings the prospect of becoming primary providers of pay video services OTT, or even IPTV.

There is then the question of how best to distribute video within the home to multiple connected devices, where relevant, and on that front some novel approaches have been exhibited at MWC 2022. WiFi is one option but even with the latest enhancements under the banner of WiFi 6, and also WiFi 6E extending into extra spectrum around 6 GHz, adequate QoS cannot always be guaranteed, especially in buildings that are larger or have walls that impede RF signal propagation significantly. One option unveiled at MWC 2022 by China’s Huawei is a combination of fibre and WiFi networking called FTTR (Fibre to The Room), using fibre as a backbone interconnecting rooms and relying on WiFi only for the final hop within rooms, when there is less impediment to the RF signal.

Another idea that has been knocking around for a while is to use light rather than the higher radio frequencies to transmit data. This has come to market for consumers at MWC 2022, where PureLiFi, an Edinburgh-based specialist in use of light to transmit data through the air, launched its [email protected] system. This comprises a smartphone, a downlighter, a smart TV and an AR (Augmented Reality) Headset, all connected by light. The idea again is not to replace RF wireless, but to complement WiFi and 5G connectivity, and has come to market after various deployments at larger scale with the US Army for secure mission critical communications.

The broader message that faster and more reliable internet connectivity, whether over wireless or wired networks, is shifting what is consumed online towards immersive content and video, was issued at MWC22 by Mark Zuckerberg, CEO of Meta, the new name for Facebook as part of a rebranding exercise unveiled in October 2021. Zuckerberg was promoting his concept of the metaverse connecting virtual worlds in an increasingly immersive internet, although one which will not account for the majority of video consumption if headsets are required. Whatever the case, demand for connectivity will proliferate further. “Things like remote rendering over edge compute and wide-scale immersive video streaming will take entirely new types of networks,” Zuckerberg said.

This led to speculation over how quickly 5G would evolve and possibly extend into a new sixth generation. The first step will be to deploy 5G system enhancements coming with the next Release 17 of the 3GPP standard, which then provides a foundation for 5G-Advanced (Release 18), accessing even higher frequencies up to 71GHz. The relevance for video is that 5G-Advanced brings machine learning algorithms designed to optimize the network on an end-to-end basis from core to the physical (PHY) radio layer, or the RAN (Radio access Network), for consistent low latency data transmission.

Ensuring that these optimizations work as intended will require careful and rigorous monitoring. German test and measurement group Rohde & Schwarz was prominent at MWC22 promoting technologies and products for such over the air measurement of signal integrity across the wide range of frequencies used for 5G.

MWC 2022 may still only have drawn half the normal attendance, both of delegates and vendors, but that was a lot better than the 20,000 of MWC 2021, when it was eventually staged four months late, with about 100,000 virtual attendees then. This year’s total is also significantly higher than looked likely just a few weeks before the event, but there was then a flurry of late acceptances from vendors and bookings from individuals, attracted by slackening travel restrictions after it had become clear the latest dominant omicron variant was much milder than earlier versions of the Sars-CoV-2 virus.