Steeven Petitteville’s background in cinematography begins with the sort of story that many people would like to be able to tell. Petitteville didn’t finish studying at the ESRA film school in Paris, having become too busy working in the camera department to do so. After ten years as a camera assistant, he arrived in Los Angeles to shoot a commercial. Seven years later, he’s still there.

Petitteville’s experience in camera includes some prominent titles. “I was very lucky to be camera assistant for Rodrigo Prieto on Babel and under Jeunet on A Very Long Engagement [photographed by Bruno Delbonnel]. After that I thought I'd seen enough, I can go by myself. The background is about ten years. But it was before you can buy a digital camera!” Petitteville describes his first job as a cinematographer as “a piece of modern art, video modern art for a composer in Dublin. We shot a fish coming out of an ice block. That's the first thing I did and from this I got into film, music videos and, pretty fast, commercials.”

“Every French commercial was shooting around the world in different places,” Petitteville continues, “So I started moving around, meeting foreign directors. I did my first feature in Ireland with the same guys as the fish thing, then a French feature. Then Phil Joanou, a director from the US, called me for a commercial. So, I came to LA for one commercial and on day one, the director asked me if I was still there after that. I was there for a few months, I thought ‘it's going to keep going on and on and I'll find a place to rent’. I had four days of clothes. I had to re-buy everything!” 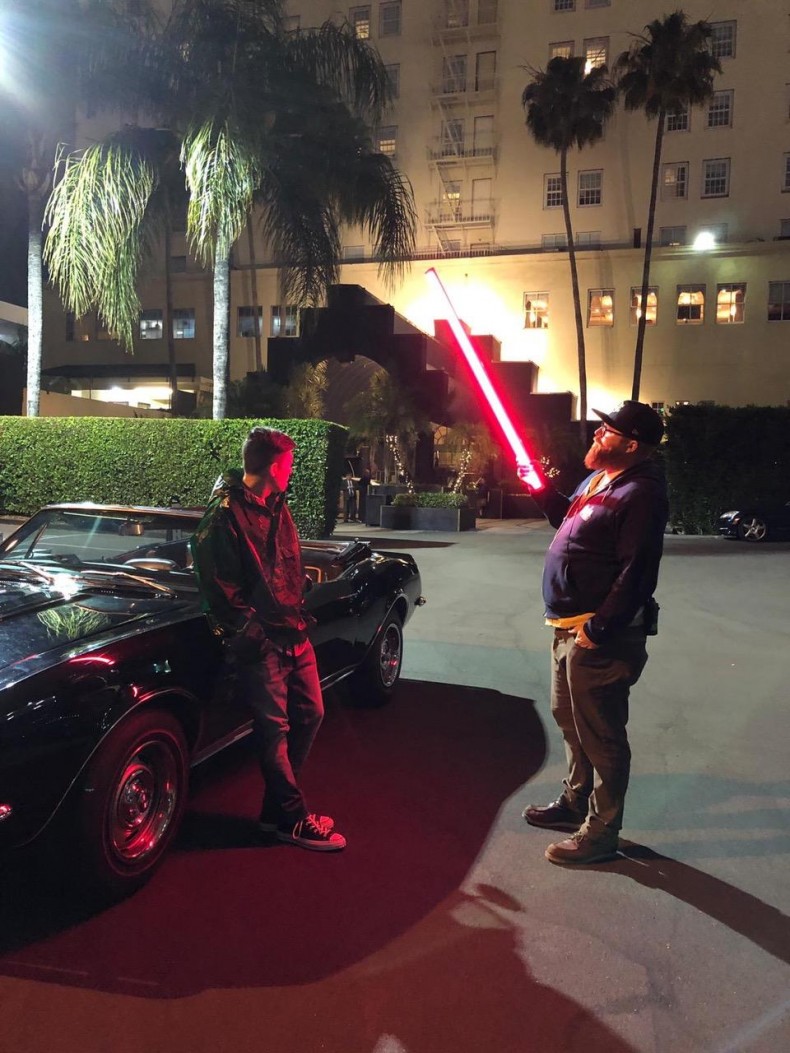 “Vernie Yeung is a Hong Kong director that I worked with in Argentina nine years ago,” Petitteville recalls. “That was one of my first commercials abroad… since then we’ve done jobs together every few years. He was based in London at RSA before that and then he went back to Hong Kong.” Yeung and Petitteville’s history includes collaborations on both commercials and a segment of the multi-director 2016 feature Good Take!. “We shot that in Macau. I was the only non-Chinese person on set. The second AC spoke enough English for me to get the information and to send out work and stuff. We were working with signs with the electricians. It was a crazy experience but a really, really good one. It could have been the worst nightmare ever, but it was fun. Of course, the director was speaking English and it was perfect that you don't speak Chinese and the only thing you have to think about is putting some nice stuff in the camera!”

Yeung and Petitteville’s most recent collaboration is a commercial for the brand Vvild, starring Canadian-born Hong Kong actor and singer Edison Chen and shot in Los Angeles in May 2019. The crew spent one day shooting a white cyclorama at The Void in downtown LA - “with the white backgrounds, red backgrounds and all these things,” as Petitteville puts it, then a second day at the Roosevelt Hotel on Hollywood Boulevard. Over the course of May 6, the crew shot ten different locations around the hotel, including scenes in the library, penthouse bar and bathroom, on the roof and in the street outside, including driving scenes. 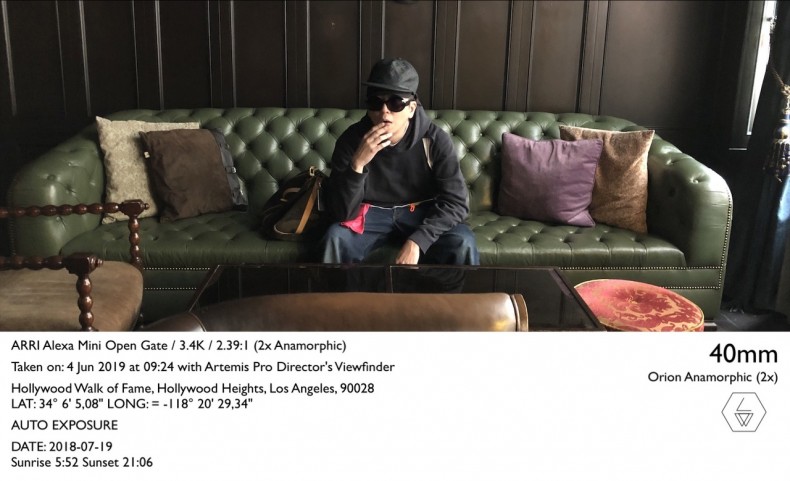 Petitteville’s creative approach was rooted in his documentary experience. “It has to be stylized, it cannot be a documentary, but I always try to think if it were a documentary how I would do it to make it natural and also nice. It's my documentary background meeting my commercial background.” Experience in the highly mobile world of documentary helped, given Yeung’s preferred approach. “With this director, you have to be ready for anything. I did prep some stuff but that's more prepping the way it's going to happen rather than really being able to pre-light. The guys were ready to move fast.”

“Knowing the director helps a lot,” Petitteville says. “You know what he likes, and you can pretty much know what he's going to like in each proposal. So, I tried to get a couple of proposals for every location. We kind of had a script, more what has to happen than a very precise storyboard. So, I was just projecting and thinking about whatever I would do if I was in his position… he never puts me in a situation where I'm having to face something I don't like or don't know how to do.”

The production was shot on Alexa Mini with Atlas Orion anamorphics, which Petitteville describes as “perfect for this project. The director and I love anamorphic, so we can convince anyone to go this way. We did shoot anamorphic on pretty much everything we did… probably the last three or four projects. Since we started to shoot anamorphic with Vernie we've shot everything that way.” On other productions, Petitteville had used Panavision’s T-series anamorphics with an expander to cover the sensor on an Alexa LF. “That's really nice”, Petitteville says, “but I've used Atlas three or four times. There are things about the Atlas I like, and things I prefer in other anamorphics.But for this kind of thing, the fact that they're T2 is good. Even if they're not great at 2, you can still go at 2 for nights. That was great, and the look was a little shinier than Kowas.” 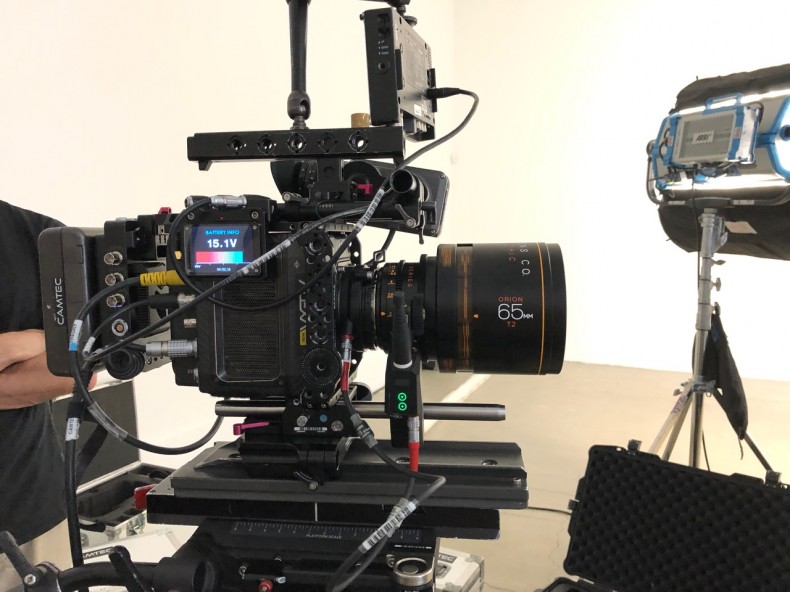 With Yeung’s fast-moving approach in mind, Petitteville worked with gaffer Brian “Red” Hickman and key grip Mike Enriquez to get the most out of a lightweight equipment package. “It’s really teamwork that makes this kind of job possible,” he says. “If it had been five to ten years ago it would have had probably two trucks and it would have been done in four days. The freedom we have now with LEDs, not only the power or the color, but also that it's lightweight. It's super easy to hang up, put on stands and move around. Literally, with two electricians you can build something quickly that would have ten years ago taken a day to put up.” Focus puller Alex Wilson was also responsible for rigging a Ronin gimbal, with view-finding via a TVLogic VFM-058. On the Alexa, Petitteville used Arri’s own viewfinder.

The finished commercial makes bold use of color, and Petitteville’s approach relied heavily on color-mixing LEDs. “One of the things I was really trying for the first time was the DMG Mix series. They just brought out the app that permits to take a picture of something and spot a color on the picture... that's what saved the rooftop with the colored lights. We're on the roof of the Roosevelt, they have these red neon signs on the top and I needed to put some lights on their faces as well, and I wanted them to match.”

“There was this great moment where the sun is coming down and everyone is rushing,” Petitteville continues. “I wanted to match the color…. we literally took an iPhone picture and put that on the lamp, and it matched pretty perfectly. I used that again in New York on a documentary, literally me with a camera and one DMG Mini Mix and one guy following. Same thing, it's the end of the day, and the light was becoming golden and we wanted it to match.” 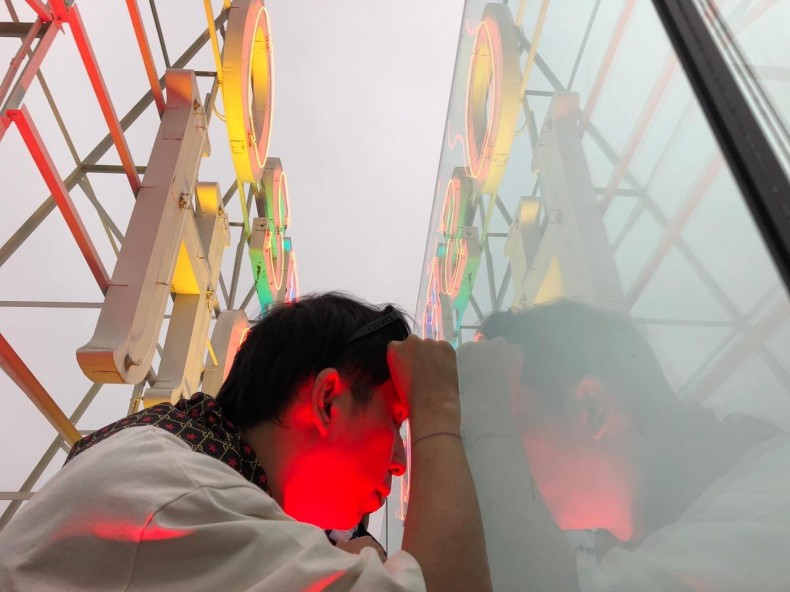 Color choices were greatly informed by the LUTs used in monitoring, though Petitteville prefers to keep things simple. “I did use a DIT on set and I do kind of pre-grade... I'm always using one LUT for daylight and one for night. I don't want to tweak and use a lot of LUTs. I think it's distracting. It's harder and it takes a longer time to get back to different looks. So, I try to stick to one direction and one LUT as if it was a film stock.”

The production was finished at Apache in Los Angeles, with colorist Quinn Alvarez working in Resolve. Petitteville supervised in person but this is, he warns, an increasingly rare occurrence. “More and more people are doing it remotely. Especially on commercials, it's about the client and the agency. we're out of the process more and more and it's happening somewhere else. It was supposed to be in Hong Kong, but I talked him into doing it in LA… I really like color grading, so I like to be there as much as possible.”

It’s perhaps surprising that the subject of the commercial is – at least to anyone who doesn’t speak Chinese – somewhat opaque. “The product is an electronic cigarette,” Petitteville says. “You can't tell because he's not smoking at all. I knew there was a big deal about the product because we never see the product and you're not supposed to. Vernie told me in the end, if you look at the end, the logo has a little smoke on the top. It took him a week to convince them they needed it!”