Planning the cinematography of a production which is quite literally about darkness is a challenge. Shooting a documentary with a skeleton crew in a place where power cuts are every day is an even bigger challenge. Director of photography Miguel Angel Viñas faced all that and more on The Road Bad and the Place Dark, a documentary shot in Sierra Leone for medical charity Médecins du Monde.

The route to Africa began with director Borja Larrondo, who Viñas met on a previous project for the same client, “a short documentary for Médecins du Monde… I took a look at the brief. It was amazing. I met the director through Skype, we got on - our views, the type of cinema we like. I was at that time in Ireland, and the documentary was to be shot in Madrid. The following day I was in Madrid… from there it became a super good friendship and we've been in touch ever since.”

Larrondo in touch again in November 2019, and as Viñas says, “he said, ‘how would you feel about shooting in total darkness, no light, in the heart of Africa... I have this documentary coming up and I'd like you to do it.’” Interest piqued, Viñas readily accepted. He describes the subject simply: “It's about the electricity cuts in hospitals at night. At night, they don’t have electricity. It's strange because before the war, in Kabala, they had an electrical power plant. We went there and looked at it, and talked to people who worked there before, and asked ‘why is this not in use anymore?’ They told us that, well, the government didn't let us use it, and the knowledge of using it has gone away. We were perplexed – wow – this doesn't make any sense to us because we come from a place where there's electricity everywhere.” 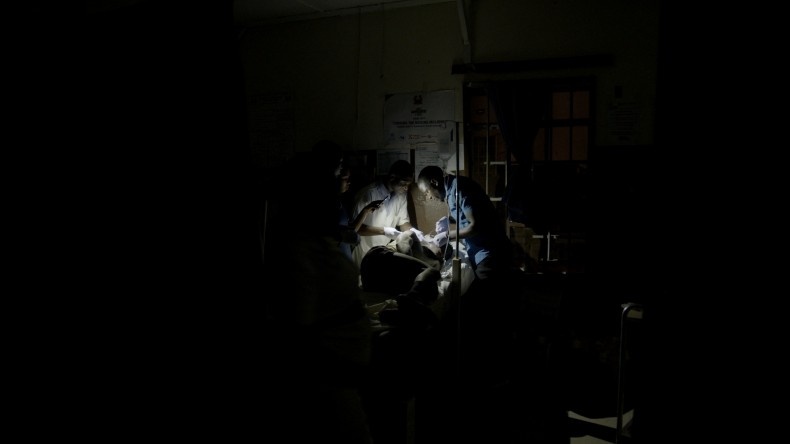 Production was scheduled to take place in Freetown and Kabala in Sierra Leone in February 2019, which would be a first for both Viñas and the sponsoring organization. “Médecins du Monde had never shot abroad. All the campaigns they had done were in… cities in Spain. And we proposed to go to a third world country!” Eventually, though, the veracity of first-person observations won out. “It was about Sierra Leone... if you want to talk about what's happening there we should go there. It took them about a month to realize that's what the project needed.” 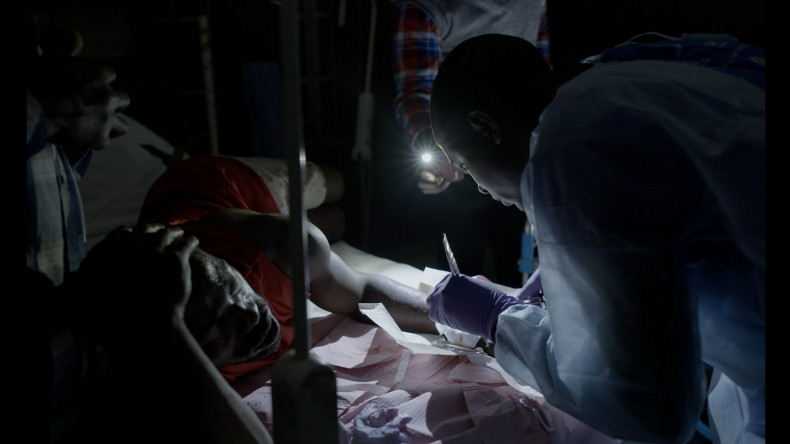 Rough conditions were expected, so Viñas and his crew packed for easy travel. “When the production company and Médecins du Monde said yes to go to Sierra Leone, they said if we're going there, we have to have a super light equipment and camera package… we had two bags and in those two bags we put the camera, two lenses, mini monitors, and a couple of lights… we didn't put anything in the cargo hold in the planes because Médecins du Monde said not to do that. They weren't very sure everything in the hold would reach Sierra Leone because of all the corruption.”

The camera in question was the Sony FX9. Viñas had evaluated the Venice as another full-frame option but overlooked it for sheer bulk: “we needed to travel very light. We got the Venice and we got the FX9 and shot tests side by side, not very scientific... we shot different scenarios and we saw the FX9 was amazing. We mainly shot at 10,000 ASA and 16,000 ASA underexposed by two stops because we wanted all the noise and to break the image. The FX9 really is amazing. I would definitely shoot a movie or TV show on it.”

Portable light was provided by Aladdin Fabric Lights and Astera Titan Tubes, as well as some locally purchased LED domestic lighting which the filmmakers leveraged for its color tint. In the main, though, Viñas let the darkness play. “We wanted the audience to squeeze their eyes trying to see what is on the screen, and start listening to what the people were saying, forgetting about the images... and at some stage their eyes would get used to seeing into the darkness… they would realize that what is happening in Sierra Leone is real.” 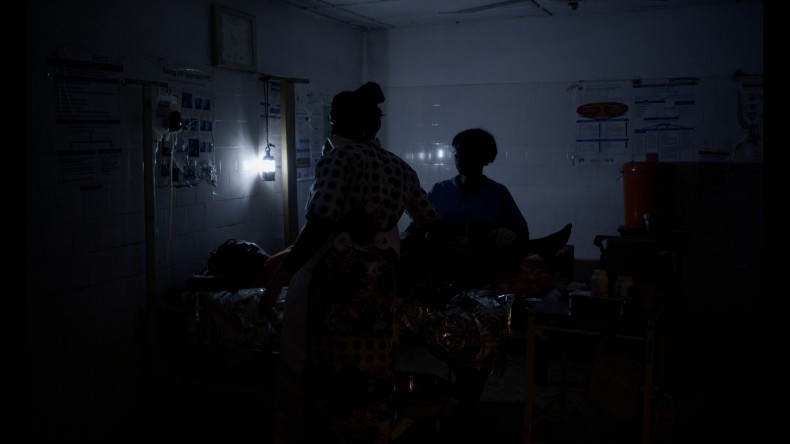 It would have been easy to choose a zoom lens for flexibility and portability, but Viñas preferred a less conventional approach. Choosing Zeiss Supreme Primes, he restricted himself to the 21mm and 29mm focal lengths both for portability and for a more human perspective. “Through all the pre-production, we were talking about whether we should bring a zoom or not. In the end, we decided not to... if we were going to shoot everything with two lenses, where would we put the zoom lens. What does a 135mm shot tell us? Does it fit within the story? I don't think so. With the 21 or the 29 you have to be on top of the action.” Partly because of the choice of wide lenses, Viñas composed the production for 1.66:1 aspect ratio. “It was very important for us to show the space they were living in. As we were shooting with wide lenses, the 1.66:1 aspect ratio was going to give us the chance to show the spaces fully, from top to bottom.”

Given the subject of the documentary, Viñas was naturally concerned about keeping all of his equipment powered. “We got eight batteries for everything, meaning camera and the lighting. I was very concerned. Eight batteries? We're not going to be able to shoot! We'll shoot for one hour and the power will be gone. But the producer said we're going to bring eight batteries. If there's any issues we will either bring two more or stop and have a coke!” In the end, the FX9’s modest power consumption and the efficiency of the Aladdin and Astera lighting saved the day. Only one interview suffered a mid-shot lighting failure but given the subject of the piece it seemed almost appropriate. “We were shooting the last shot of our interview. It was one, or one and a half hours. I saw how the light just disappeared. Everyone just looked at each other. Nobody cared.” 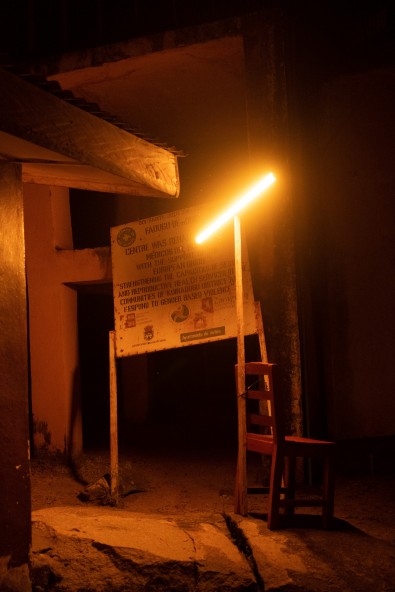 Having received such stark warnings about the security of air cargo, anyone might have been nervous about bringing this amount of technology into a third-world country, but Viñas reports no problems. “We were working with Médecins du Monde and we used their local fixers. They know everything, and the people from Sierra Leone are very understanding of what MDM does for them. They were received with open arms. People were extremely helpful, happy, welcoming... I suppose that having the MDM badge makes a difference because everyone knows you're trying to do something for the best. We made friends everywhere. My gaffer even took an apprentice. We said, ‘now you can start your own studio!’”

From natural history to current affairs, Africa is a much-photographed place, but Viñas was keen to confound expectation. “We wanted from the beginning to avoid making beautiful images,” he says. “We wanted a vision that was not European. For us to do that we went against all the conventions. When you think of Africa you think super sunny, very orange, with great greens, and wanted to avoid that.” The realities of life sometimes moved the images away from an African idyll, too. “In Kabala during the mornings they light fires. They light the forest surrounding the city on fire. They want the forest to become part of agricultural land. At 7am you looked up and the mountains surrounding the town were on fire. We captured a lot of that.”

Inevitably, the crew attracted attention. Viñas remembers an occasion during a shoot at the electrical plant, where the pool of unaccustomed artificial light drew a crowd. “They were amazed that we were using the two Aladdins and one Astera tube to light from outside. One of them came to me and said I'd be happy to have that at home in my room, it'd be handy to have light. We were sad in that sense because we had the chance to show them that they could live with light, and they had none, and we couldn't give it to them.” 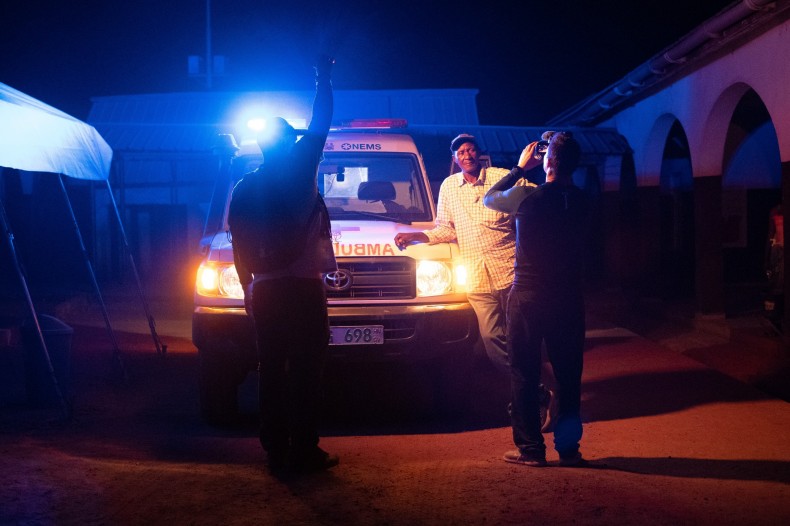 The production was initially intended to be no more than five minutes long, but eight days of photography produced over twenty-two hours of material. The full production would be twenty-one minutes in duration, with four one-minute promos also created for broadcast. “Médecins du Monde gets some prime time on different channels donated sometimes,” Viñas says, “and they're going to try for the documentary to end up on Amazon or Netflix or Movistar, which is the Spanish HBO.” At the time of writing, the final sound mix was in progress, with grading still to take place at Company 3. “I probably should say that I'm very happy to shoot this kind of thing,” Viñas concludes. “I've only been a cinematographer for a few years but what I've discovered, personally, is that I like making things that make people’s lives matter. Even though I love commercials… narrative or documentaries are a very good way to express yourself and I love it when something I do makes an impact on people's lives.”