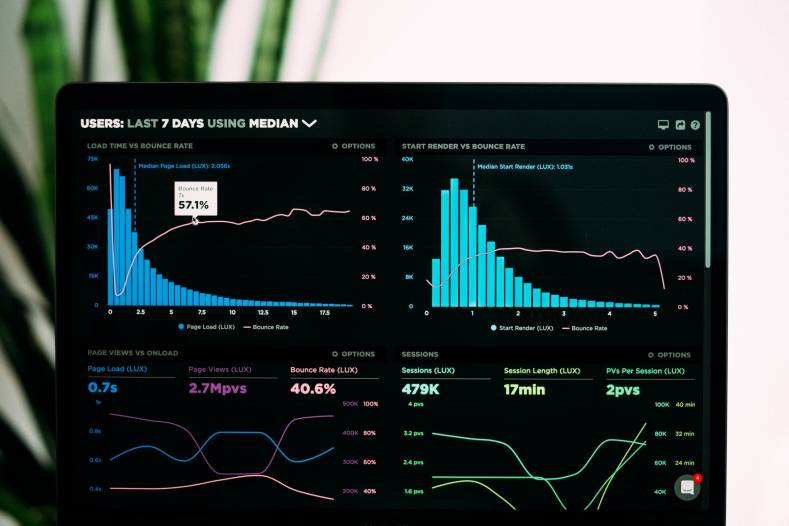 Marketing’s logic is simple. All laptops have a required set of components: enclosure, cooling system, power supply, keyboard/trackpad, and of course a motherboard. The markup for such a base system is designed to be low enough to attract customers while being high enough to generate sufficient profit.

By creating additional product lines that satisfy the special needs of a large group of customers, more esoteric parts can be included in laptops. These parts don’t cost that much more but can be marked-up so as to generate significantly greater profit. This has been the case for gaming laptops.

In the past year ordinary laptops have become so powerful they are fully capable of playing most games at 1080p60. Two market solutions are now used to increase the need for gamers to buy high-performance laptops. First, promote increased display rates of 120Hz or 144Hz. Likewise, promote increased game resolution such as 1440p. Like magic, the need for super gaming laptops is reestablished.

The second solution requires finding another group of potential customers that require high performance computing. The obvious choice: those of us who are Content Creators.

What’s brilliant about this solution is that typically only a marketing campaign is required to promote gaming computers as content creation computers. (Some manufactures do tone down the aggressive case artwork to something that looks less hostile.)

The data I collected confirmed that computers, in particular laptops, which perform well in gameplay will likely perform well for media creation. Both gaming and content creation involve long task execution times during which heat is generated by the CPU and GPU. Both components can push a computer toward, or into, thermal throttling. (See Thermal Throttling.)

So, although gaming and content creation tasks do not employ the same compute intensive processes, they both can generate high thermal loads.

You might expect that a discussion of laptop CPUs would focus on whether you should choose a 6- or 8-core microprocessor. That would be true were we discussing desktop computers because they typically have powerful ventilation systems. Laptops, not so much.

Laptops are far more susceptible to thermal throttling. When heat can’t be dissipated, a microprocessor defends itself by thermal throttling. The CPU chip slows itself until heat no longer threatens its existence. Naturally this can greatly lower laptop performance potentially erasing much of the expected performance increment of an expensive 8-core processor over a less expensive 6-core processor.

A laptop’s CPU chip is not the only part that can get extremely hot when color grading and editing. When a computer has a discrete GPU, this hardware also heats-up.

Unfortunately, laptops are not marketed with thermal throttling specifications. That’s why monitoring reviews of how a laptop handles “hot” games are one way to estimate content creation performance.

Industry standard benchmarks can also be used to measure the relative performance of two computers. Figures 2 and 3 show Geekbench 5 CPU Benchmark scores for a 6-core/12-thread and an 8-core/16-thread processor.

These results show it is the number of cores/threads that determines the winner even when those cores are running with a lower clock-rate. The performance difference is 30-percent in favor of the 9880H CPU.

When I bought a PC laptop with a NVIDIA GTX-1660Ti I had a sense of how powerful the discrete GPU would be. The fact it wasn’t an RTX chip told me the GTX-1660 did not support ray tracing. The 16XX designation suggested a performance level better than a GTX-1060. 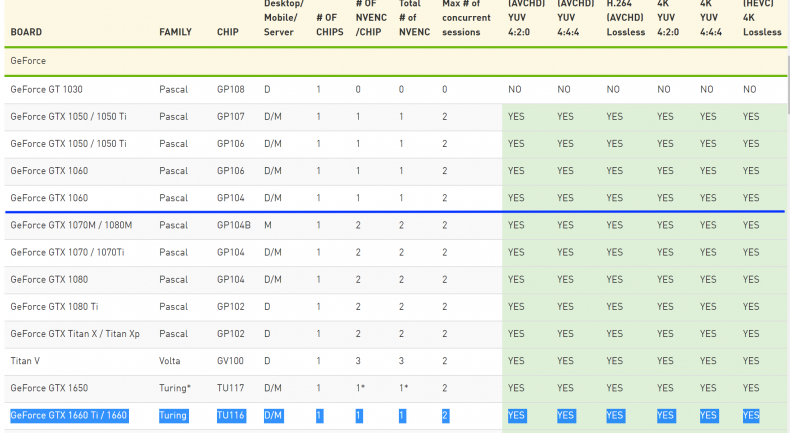 Recently I was looking at a newly released laptop. It employed a newly announced AMD 5300M or 5500M GPU chip. AMD told us the 5000M series used 7mm (NAVI) architecture, used fast GDDR6 VRAM, and that it was “optimized” for the METAL graphics API. The 5300M and 5500M were, however, the slower two chips in the new 5000M series.

What if you were looking for a really hot laptop with a much more powerful GPU? Figure 4 shows the range of NVIDIA GPU boards with the GTX-1660Ti at the low-end and the RTX-2080 at the high-end. (The chart also includes several AMD Radeon GPUs including the powerful new RX 5700 XT.) 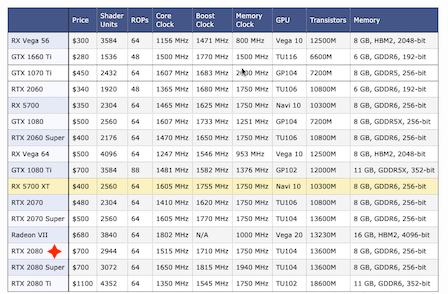 It is possible to buy a laptop that employs a very powerful RTX-2080 mobile chip such as that shown in Figure 5. 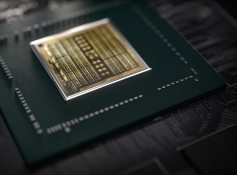 GPU options typically include one low-end GPU chip that you know to avoid. Higher performance GPU options often are differentiated by the amount of VRAM supported.

The number and complexity of FX you apply to video streams when editing suggests the amount of VRAM you want. Remember when you are proxy editing, frame-size is not a determining factor.

If, however, you are directly editing 4K, 6K, or 8K, a large amount of VRAM will be required. In any case, 4GB of VRAM is the minimum you should consider.

Game software depends on a “master thread” that determines game action. When the CPU core running this thread is not fast enough, it can cause the GPU to briefly idle, leading to game slowdown. Therefore, gamers prefer a CPU chip with a high base clock-rate.

An example of such a chip is the Intel 9750H with a clock speed of 2.6GHz. Because most games do not make use of many threads, the 9750H which has only 6-cores, should be fine for most gaming. 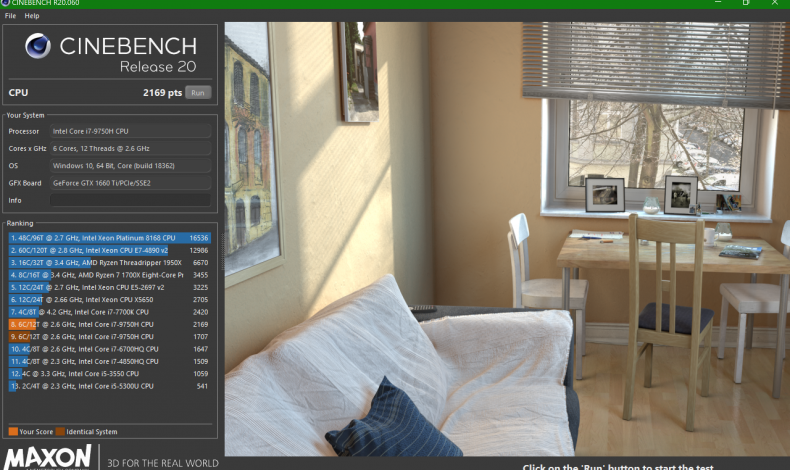 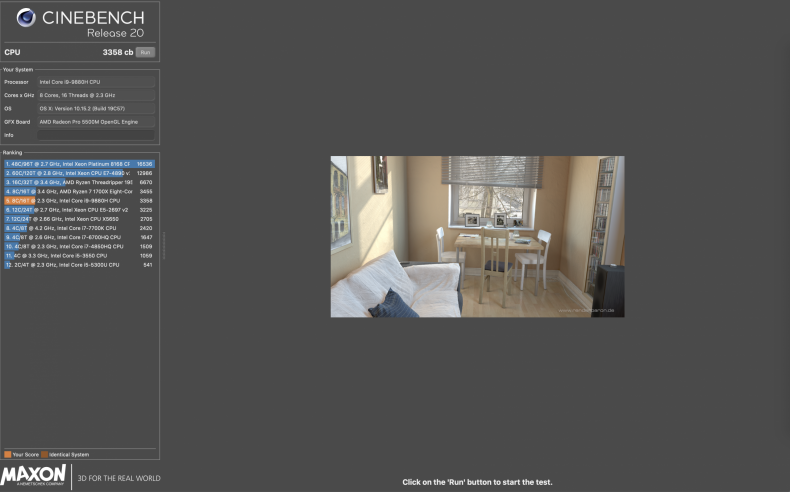 This GPU difference matches reports that 5500M performance lies between the slower GTX-1650 and the faster GTX-1660Ti. Thus, the power of the 9880H CPU more than makes up for the much slower 5500M GPU. (This imbalance may be mitigated when AMD delivers faster 5600M and 5700M chips for laptops.)

These results show that for a content creation benchmark like Cinebench where all 16-threads are running independently at maximum speed, the number of cores determines the winner even when these cores are running at a lower clock-rate.

When one selects a laptop looking at performance specifications alone, there is a danger one will overlook how the new system “feels.”

I suspect most folks buying a laptop will be creating content that includes proposals, scripts, invoices, and reports. Thus, the importance of the keyboard and trackpad design.

Although my PC laptop provides RGB lighting for each key—amazingly it does not provide a Caps Lock or Num Lock key light. Its small trackpad required the drag-speed turned up which made it almost impossible to click within small boxes. Not good.

To avoid false taps, I had to turn-off tapping. Therefore, I had to only use clicking. Because the trackpad is hinged from the top, its clicking pressure is different depending on where you press. Even worse.

These failures demonstrate the difference between a game computer bought with goal of using it as a content creation computer and buying a laptop designed for most all types of content creation.