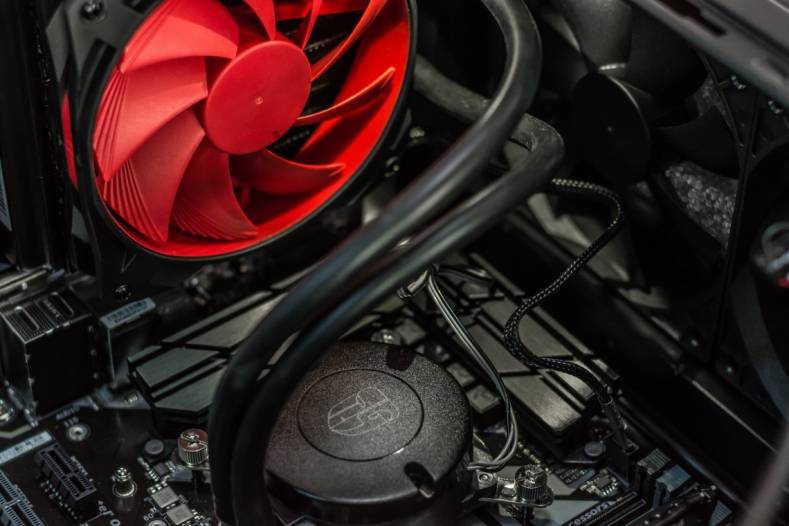 When, in May 2019, AMD announced their Ryzen Zen 2 architecture, beyond the amazing performance offered by the new Series 3000 microprocessors, they announced the new chips would support PCI 4.0. Although I was pretty confident the step from 3.0 to 4.0 meant 2X greater bandwidth, I decided it was time to learn more about the PCIe bus.

While we correctly understand PCIe bus performance has increased over generations, fundamentally it’s lane performance that increases over time. So, the first technology to understand is how a lane functions.

A lane consists of four signal lines. Each pair of lines comprise a differential line-pair that sends signals in one direction. A line-pair functions as do a twisted pair of wires in a cable carrying a balanced microphone signal.

Were a lane simply a differential signal path—the only way to increase lane speed would be to increase the speed at which data passes over a lane. When the PCI Express (PCIe) bus was released in 2004, it was designed to transmit data not simply as ones and zeros representing the data itself. Rather, the data to be moved were coded using a scheme called “8b/10b.”

If you are curious, this scheme is described as a line-code that maps 8-bit words to 10-bit symbols to… provide enough state changes to allow reasonable clock recovery.

If you are really curious, line-codes go back to IBM in 1983 and are used, for example, to burn pits on optical discs. HDMI, Displayport, SATA, SD UHS II, and USB 3.0 all employ 8b/10b coding.

While 8b/10 coding is a clever way to obtain greater noise immunity—it isn’t free. Encoding imposes a 20-percent overhead because every byte becomes a 10-bit symbol. Thus, a symbol transfer rate of 2.5GT/s provides only a 2Gbps data-rate.

Encoding overhead now falls from 20-percent to only 1.54-percent, thus enabling a 7880GT/s symbol transfer rate. This symbol bandwidth translates to 7.9Gbps which is a unidirectional data-rate of 985MBps. Not quite a doubling of the data-rate, but close enough for marketing purposes. (Figure 3.)

There are four things to know about PCI 4.0. First, as expected it is twice as fast as PCI 3.0. To achieve this performance, the symbol bandwidth is doubled from 7,880GT/s to 15,760GT/s. This translates to a unidirectional data-rate of 1,970MBps. (Figure 4.)

Second, AMD has announced it will only support PCI 4.0 on motherboards based on their top-of-the-line X570 chipset. Thankfully, the well-regarded Gigabyte Aorus Elite WIFI motherboard employs the X570 chipset and yet sells for only $200. See Figure 5. 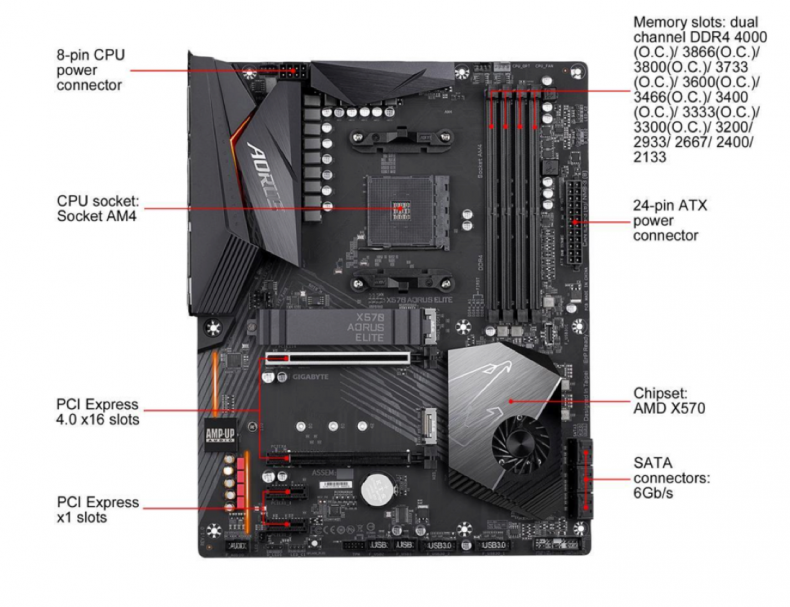 Third, the current highest performing graphics card, NVIDIA’s RTX-2080, is able to only slightly exceed the bandwidth provided by PCI 3.0. PCI 4.0 performance will not be needed until, for example, a card with a pair of 2080-class GPUs becomes available. Figure 6 shows an Apple announced dual GPU board for its new Mac Pro. 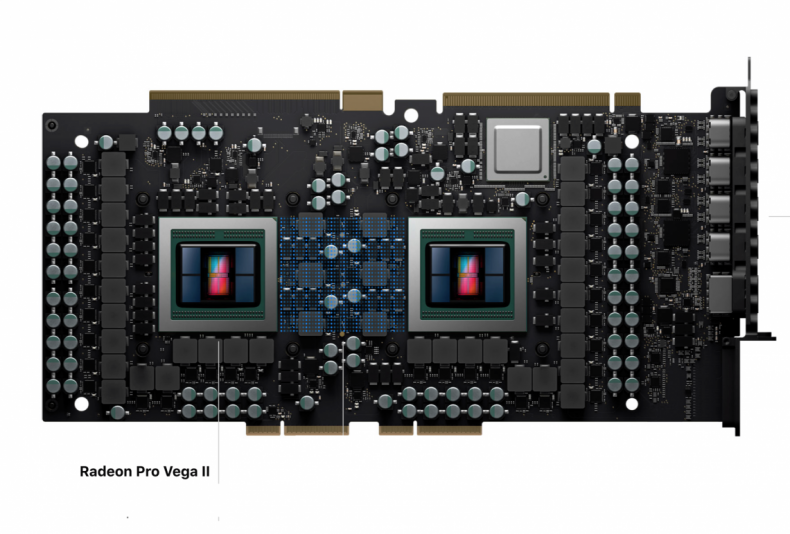 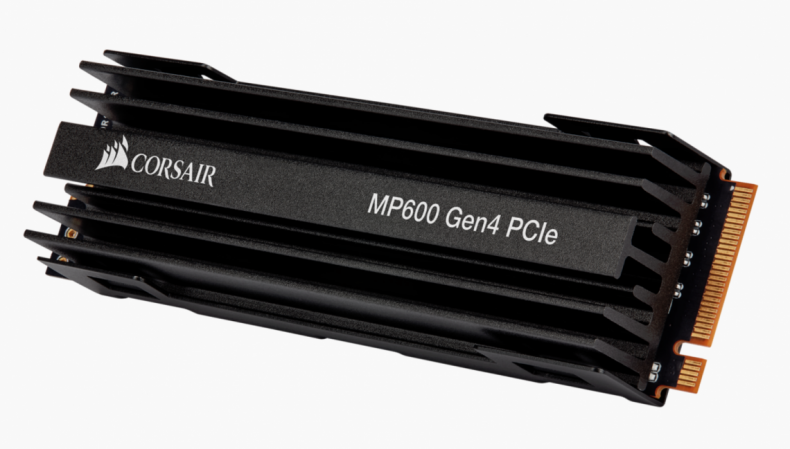 However, when both the MP600 and EVO 970+ drives are tested in a multi-tasking Random-Access Read/Write situation, the MP600 Gen4 performs about the same as the cheaper, but far less sexy looking, Gen3 Samsung 970 EVO+. 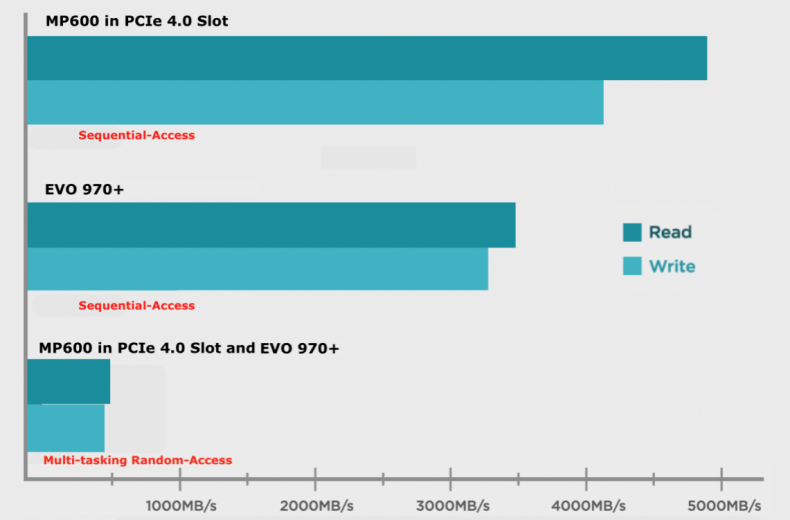 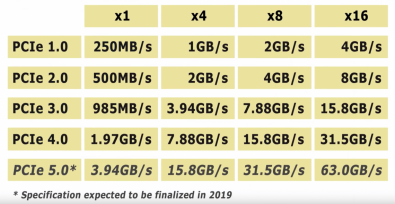 Where do lanes originate? Intel microprocessors typically host 16- or 24-lanes. Very high-performance CPU chips, such as the AMD Threadripper, can host up to 60-lanes.

Via a Direct Media Interface (DMI), an Intel microprocessor connects to an Intel Platform Controller Hub (PCH) chip that typically can host an additional 24-lanes. (AMD systems operate in a similar manner.)

Unfortunately, DMI bandwidth is equivalent to four PCIe 3.0 lanes. An Intel hub (chipset) thus acts only as a high-speed switch for the additional lanes. Not only is a PCIe bus from a hub bandwidth limited, additional latencies are introduced.

Assuming a high-performance laptop, the discrete GPU chip is connected by a x16 PCIe bus to the microprocessor. This connection will be PCI 3.0, or 4.0 on AMD Series 3000 chips.

Modern laptop and desktop computers offer an M.2 slot to support an SSD. To communicate with an SSD, an M.2 slot employs the NVMe (Non-Volatile Memory Express) protocol. An M.2 slot provides a x4 PCIe connection. (Figure 10.) Many systems now provide a second M.2 slot. Again, the connection will be either PCI 3.0 or 4.0.

Now that we have a good understanding of the PCIe bus, and we know how PCIe 4.0 performs, it’s not unreasonable to see both PCIe 4.0 and PCIe 5.0—and, yes, PCIe 6.0 specifications as offering mostly marketing performance. Kind of a “…move on folks, nothing to see here—YET” technology.