It is almost a hundred years since the color space of the human visual system was first explored. John Watkinson looks at how it was done.

Color only has meaning in the context of the HVS whose dominant characteristic is metamerism. It follows that any functional color rendering or reproduction system must be compatible with the way the HVS works. That compatibility can be obtained by lengthy trial and error, as was done in art, or using colorimetric measurements, as was later done in electronic media.

The HVS is pretty lousy at absolute assessment of colors, but its comparative powers are very good indeed, as anyone who has tried to match paint on a repair job will confirm. Comparison is the basis of the colorimeter, which is used to measure the color response of the HVS. Fig.1 shows that the colorimeter is a very simple device, consisting of a pair of screens mounted side by side so a human subject can compare what is on them. On the test screen a range of colors would be shown, one at a time. On the matching screen it is possible to mix the luminosities of the chosen R, G and B primaries. The test subject has to adjust the luminosities until the two screens appear the same, meaning that the three primaries have produced a metamer of the test color according to the visual system of the test subject. 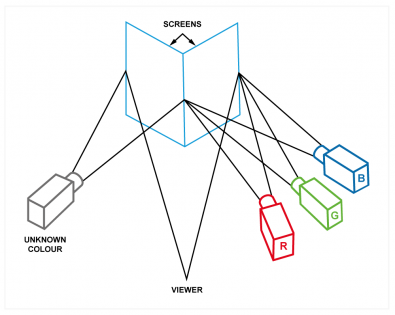 Fig.1. The comparative colorimeter has two screens close together. On one screen a color is projected, whereas on the other, three primaries can be mixed in various proportions until the HVS judges them to look the same. Effectively the metamerism of the HVS is being measured.

The screens in the colorimeter do not need to be very large and typically are arranged to subtend an angle of about 2 degrees to the test subject. It is not widely appreciated that it is only the fovea in the center of the retina that has color vision. A TV camera with that characteristic would be useless, but the human eye is capable of swiveling this way and that in order to scan its surroundings. Any color information obtained during scanning is stored in memory. What we believe is color vision is brightness vision having a tiny central color area working in real time. The rest of the color comes from memory.

Memory can be short term or long term. That orange in the fruit bowl in your peripheral vision looks orange because oranges are supposed to be orange and not because the spectrum of the light entering your peripheral vision is being analyzed. Color constancy is just an extension of that, preferring to depict what the color of a given object traditionally has been rather than how it appears right now. Performing a comparative experiment prevents color constancy from affecting the outcome. Later tests used a subtended angle of 10 degrees with slightly different results.

The original tests were done way back, before rock and roll, before television even. It's not an exaggeration to say this work made color television possible. Back then, technology was not as advanced and there was not a great choice of repeatable primaries available. Mercury lights could produce near-monochromatic wavelengths of 436nm and 546nm and a neon light could produce 700nm. When mixing three primaries, the colors produced must lie inside a triangle joining the primaries in linear color space. Colors outside that triangle cannot be reproduced. Monochromatic cyan, for example, having a wavelength of 500nm, produced perhaps from white light using a diffraction grating, cannot be matched by any combination of the RGB primaries. However, a match could be found by mixing some red primary light on to the test screen instead of the match screen.

This is the mathematical equivalent of giving the red primary negative luminosity, which could not be done for real, of course. By measuring the amount of red added on the test screen to get a match, it was possible to measure how far outside the primary triangle the test color is found. There is no such thing as negative light, nor such a thing as negative mass, but just as we can tie helium balloons to a ship to simulate loading a cargo having negative mass, we can simulate negative luminosity by adding some to the other side of the equation.

Fig.2. The color matching functions resulting from tests using the chosen primaries. The use of different primaries would result in different functions.

The color matching curves needs careful interpretation. They show how metamerism allows the HVS to be fooled into thinking it is seeing a particular color when it is seeing a mix of primaries. The three types of receptor in the eye respond over a broad range of wavelengths, and simply integrate over the appropriate range. In order to normalize the color matching functions they must be scaled such that the integral of each is the same, in other words the area under the three curves must be the same. After normalization, R, G and B become r, g and b as shown in Fig.2 and the neutral, or white point is found where they all have a value of 0.33... In order to get back from r, g or b to actual luminosity, the values from the functions have to be un-scaled by the normalization factors. r is unchanged, g must be multiplied by 4.5907 and b is multiplied by 0.0601.

The color matching functions are three dimensional and difficult to depict and interpret. What is really of interest is the chromaticity. The normalized functions are subjected to a transform that is different to the one later used in TV. At every wavelength, each one is divided by the sum of all three, such that: r = r/r + g + b, g = g/r + g + b and b = b/r + g+ b. As r + g + b = 1, one of these is redundant and it is normal to display r against g in two dimensions. Fig.3 shows such a normalized color space, which is triangular, because if b = 0, r and g must sum to 1. White must be at 0.33... 0.33... and 436nm blue is at 0, 0. 546nm green is at g = 1 and 700nm red is at r = 1. Using those primaries, any color within the triangle can be created by additive mixing with positive only values of luminosity.

If the normalized color matching functions of our colorimeter experiment are mapped on to rg space, the result is in the lower part of Fig.3, where the true gamut of human vision is revealed, with the triangle allowed by three primaries inside it. The curved perimeter of the space is the response to monochromatic colors and the straight part between b and r is where non-spectral colors exist. Anything outside that boundary is meaningless. The greatest excursion outside the triangle is in the region of cyan, where no saturated color in the 500nm region can be reproduced either by TV, computer, film or print technology, yet almost every image of rg space one sees on the Internet has been colored to make it pretty; pretty misleading, that is. 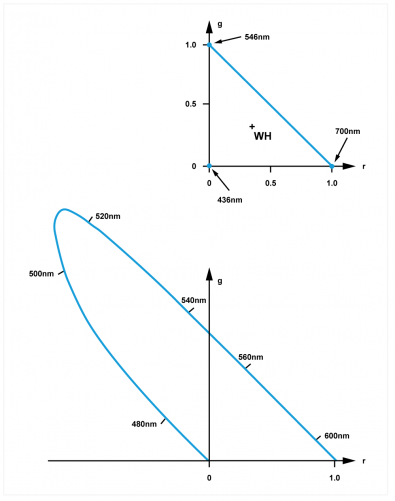 In real life saturated colors are not common and the limited gamut of imaging technologies is not a dramatic failing. Occasionally such colors occur: the microscopic structure of bird feathers acts like a diffraction grating and under sunlight saturated primary colors can be produced. Something as mundane as a duck or as exotic as a peacock or hummingbird cannot properly be depicted on a screen, but instead will always be reproduced with reduced saturation in order that only positive (or zero) light is emitted by primaries.

rg space is based on the three primaries that were used in the matching experiments. Had a different green primary, such as 530nm been used, the color matching functions would have smaller negative excursions and the resulting rg space would have been different. Nevertheless, it doesn't matter what primaries are used, there is still no way that the entire spectral locus can be embraced. Even using more than three primaries, so the color space becomes a polygon, there will still be some part of the HVS space outside it. It was considered at the time that it would be better to have a way of quantifying the HVS that was independent of specific primaries and of the white point. The negative values needed to depict the full range of the HVS in rg color space were also considered to be a nuisance and the CIE would come up with a new transform in which the parameters are positive only.

It is important to realize that colorimetry is a topic that goes way beyond its use in television and cinema. Not all applications of colorimetry assume discrete primaries. If your concern is a cabbage leaf, it contains no primaries, yet it still has a color.