At one time the only repeatable source of light on Earth was the sun. Later it was found that if bodies were made hot enough, they would radiate light. Any treatment of illumination has to start with the radiation from heated bodies. 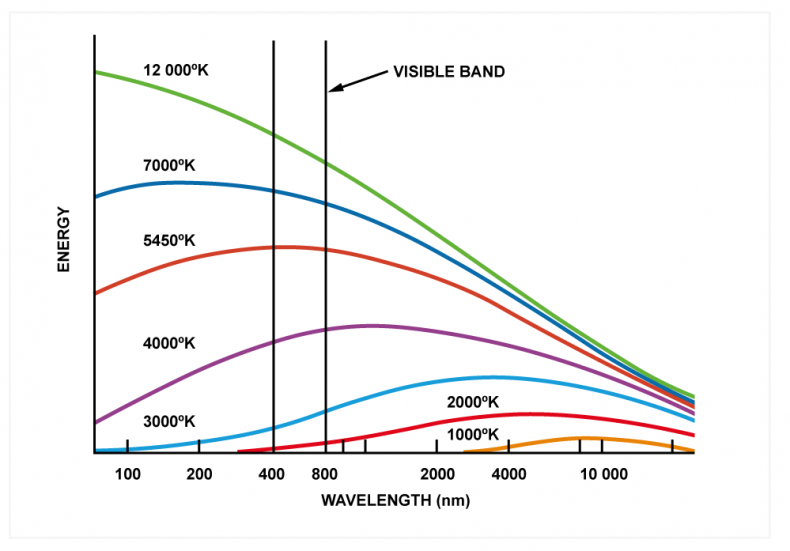 Fig. 1. The radiation from a black body is a constant function of temperature. Here the response of the HVS is superimposed. As temperature rises, first we see red, then white, then blue. The light from such sources can be described by color temperature.

Fig.1 includes the spectral range of the HVS. When a body has a low enough temperature, nothing visible to the HVS is emitted. As temperature increases, the end of the radiation spectrum enters the visible band at the red end, which is where the term "red hot" comes from. Fresh lava from volcanic events appears to be orange as its temperature is above red hot. A further increase in temperature brings the peak of the emission curve to the middle of the range of human vision. We then describe the body as "white hot". Sunlight under certain conditions looks like that. A further increase in temperature takes the peak of emission curve towards the short wavelength limit of human vision. The correct term for how such a body looks would be blue hot, but the term has not entered the language because the ability to produce such temperatures was beyond the ability of the traditional blacksmith.

As the distribution of energy with wavelength is interpreted by the HVS as a color, then in sources of light that work in that way it is meaningful to describe the color by the temperature of the body that radiates it. This is the basis of the term "color temperature" which we will look at here.

Science tells us that higher temperatures cause the color of radiation to become bluer, whereas lower temperatures make it redder. This is the exact opposite of the human psycho-optical reaction, where red is perceived as warm and exciting and blue is perceived as cool and relaxing. There's another reason why the use of blue lights on emergency vehicles is not very bright. In an unscientific society, that sort of thing is normal. Whilst the midday sun is, by definition, white, it is always depicted as being yellow in art, although the Moon, which is a reflector of sunlight, is usually depicted more or less correctly.

The range of the HVS evolved to straddle the peak of the radiation distribution of the midday sun. As the peak is very broad, it is almost true to say that midday white sunlight has practically the same intensity across the whole of the range of wavelengths visible to the HVS. In electronics, a noise signal having uniform spectral energy distribution is called white noise for that reason.

An incandescent light has a component such as a filament, an electrode or a mantle whose temperature is such that whiteish light is emitted, along with a ton of heat we can't see. The temperature of the filament in an incandescent bulb is highly dependent on the applied voltage. Any attempt to dim the bulb would also be accompanied by a change in the spectrum towards the red end. When all cars had incandescent headlights, they would only appear reasonably white with the engine running causing the battery voltage to be at its highest value. With the engine off, the voltage fell, and the headlights appeared yellow. Many modern vehicles have discharge or LED lights, and these are electronically stabilized, so there is no color change with voltage.

For creative purposes, such as stage lighting, the color of the incandescent light could then be changed by the addition of a filter or gel. The change in color due to dimming would have to be taken into account in selecting a gel. Sometimes a neutral or gray gel would be used, as this would dim the light without changing the color. A color filter is a subtractive device that absorbs certain wavelengths, converting the energy to heat. The color of the filter describes the wavelengths that are left after the subtraction. More will be said about subtractive processes in due course.

On the surface of the Earth, the sunlight has passed through the atmosphere, which has a wavelength dependent effect. The mechanism is called scattering, and it differs from subtractive filtering in that energy is not absorbed. Instead of passing straight through a nominally transparent medium as if it wasn't there, some light gets deflected over a wide range of angles. The deflected light will be subject to further scattering, which is why the atmosphere is visible to us. Scattering is wavelength dependent. Shorter wavelengths find a given air molecule to be larger than long wavelengths do and are thus scattered more strongly. That is why the sky appears to be blue. At night the faint light from the moon and stars is still scattered, but the scattered energy is so low we can't see it and the sky appears black. In space, where there is negligible scattering, anything not creating or reflecting light looks black. 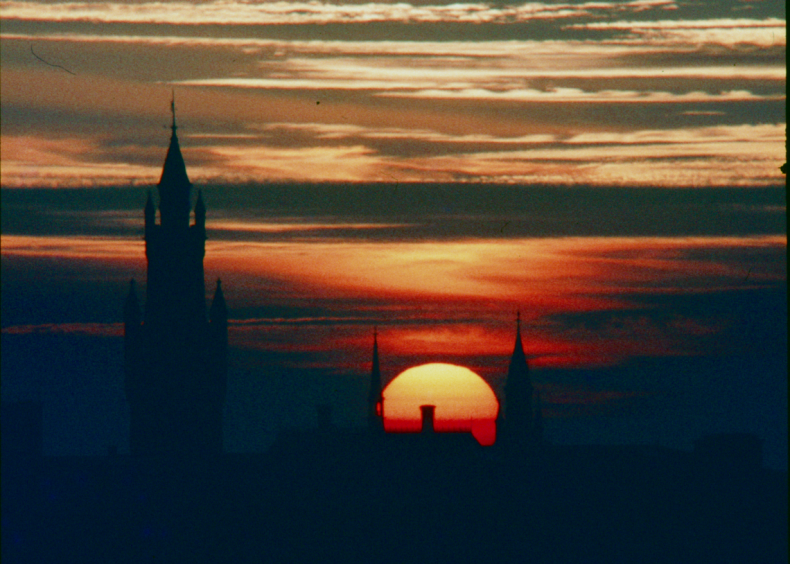 The sunlight scattered by the atmosphere is also polarized and the strongest effect is seen when looking at right angles to the sun's direction. Using a linear polarizing filter set to accept the scattered polarized light, the sky can be made to appear bluer. Shoot towards or away from the sun, and it doesn't work. The effect is still apparent even when the sun is behind cloud or after it has set. A polarizing filter can be used for navigational purposes. Birds do it and the Vikings probably did too. 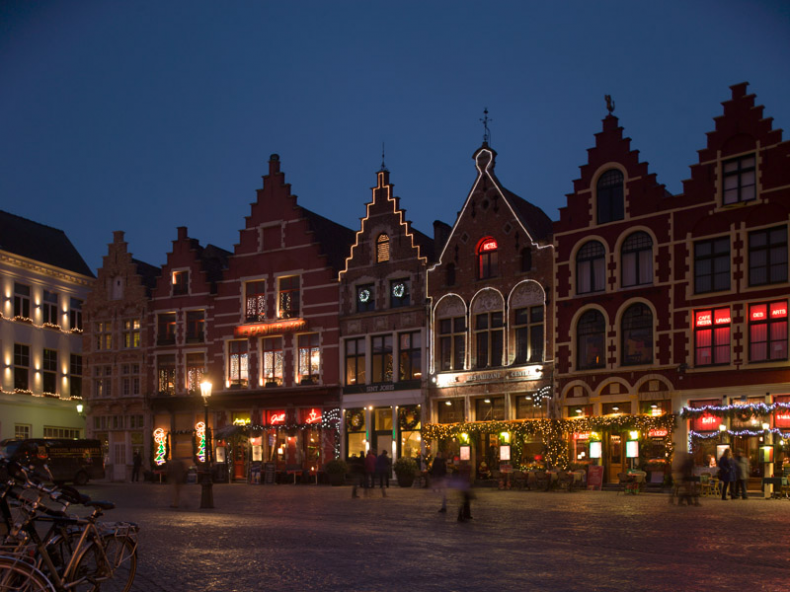 The path length of sunlight through the atmosphere is a function of latitude and local solar time. At midday the path length is shortest and the scattering and polarizing effect is weakest. However, when the sun is low in the sky, the path length can be very long, and the effect becomes very powerful. The blue scattering makes the sky bluer, and the blue energy taken out of the sunlight makes the sun appear orange/red. The increased amount of polarization makes colors appear more saturated because more of the light has penetrated objects and been filtered by them rather than just reflecting from the surface. This is most noticeable on foliage. Fig. 2 shows an example of an orange sun low in the sky. Fig. 3 shows an example of the extreme blueness of the sky just after sunset where there is no direct sunlight and all of the light is scattered. Fig.4 shows a photograph taken across the sun with a linear polarizer showing the blue-sky effect. 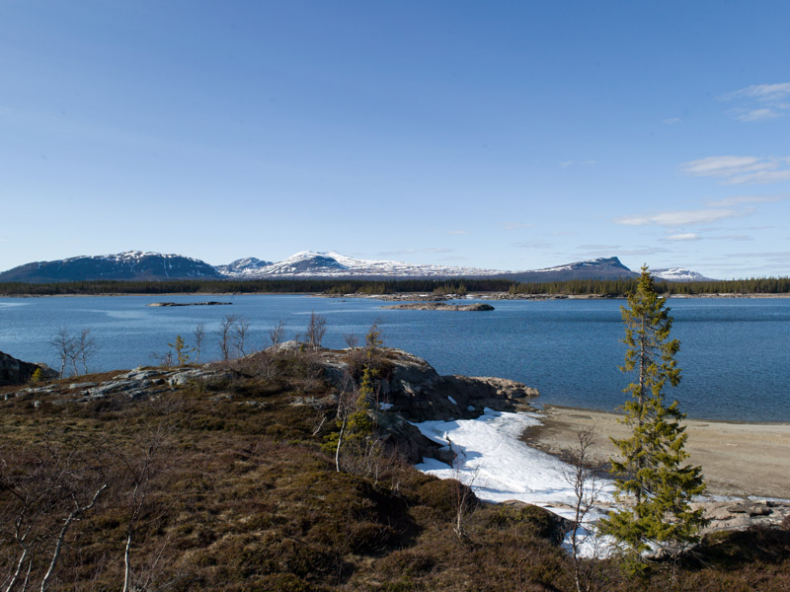 Fig. 4. Note from the shadows this shot in Lappland is taken across the low sun, where the polarizing effect is strongest. The enhanced blueness of the sky is reflected in the water. Photograph: John Watkinson, Mamiya 645, linear polariser.

The scattering action of the atmosphere changes the color temperature. Clearly latitude also has an effect on color temperature and the amount of polarization. In places like Canada, Russia and Scandinavia, daylight doesn't just look different; it is different. The paints people use on buildings are often less saturated because the polarization makes them appear more intense. The other natural factor that changes color temperature is cloud. Clouds reflect light rather than scattering it, so if we see the side of a cloud illuminated by the sun, it appears white. If a cloud is between the observer and the sun, it appears grey. Close to sunset, we can sometimes see sunlight reflected from the bottom of high clouds, which makes them appear red.

The change in color temperature of daylight throughout the day has been happening since the Earth had an atmosphere and every organism having vision evolved knowing nothing else. In absolute terms a white object, defined as one that reflects all visible wavelengths equally, appears white only at midday and becomes steadily redder towards the beginning and end of the day. Yet the HVS only sees the effect when it is extreme. A phenomenon called color constancy takes place in our senses which results in us seeing the color something ought to be, or perhaps the color it has under midday sun, not the color it may have under different lighting. The result of color constancy is that the HVS is remarkably tolerant of error or changes is the rendering of colors, especially where there is no reference, or no comparison is possible.