In this new series, it will be seen that color is a complex subject and all the more so for being multidisciplinary. The difficulty with such a large subject is that it is hard to leave things out when they are so fascinating.

If there is anywhere to begin, as good a place as any is to remark how narrow is the range of wavelengths that the human visual system (HVS) can see. Electromagnetic radiation exists over a fantastic range of wavelengths, from kilometres to picometers, with corresponding frequencies. The low frequency end is generally called radio and at some point, as frequency goes up, microwaves become infra-red radiation, which we feel, but don't see, as heat. Infra-red is a description relative to human vision. It is a frequency below the range of the HVS, which ranges from about 400 to 750 nanometres. Then we have ultra-violet, so called because the frequency is above that of the HVS. Beyond UV there are X-rays and Gamma rays.

Out of this enormous range of frequencies, the HVS sees over less than an octave. It is worth considering why the range is so narrow and why it is where it is. The answer lies in an Earth that has been unfailingly exposed to sunlight for millions of years. There would be no animal life of the kind on Earth without oxygen, and there would be no oxygen without photosynthesis. Photosynthesis is central to the cycle of nature. In addition to oxygen for breathing, photosynthesis provides plants that animals can live on. A plant that can obtain more solar energy grows faster and has an evolutionary edge, so it is hardly surprising that photosynthesis has evolved to operate at the wavelengths where the Sun's radiation is at a maximum. No doubt there were other types of photosynthesis, and natural selection weeded out the weak ones. Given enough time, and there was plenty of that, evolution can produce mechanisms that are so finely adapted that they give the illusion of being designed. It is an illusion.

The dominant wavelengths absorbed by chlorophyll in photosynthesis are what humans would call red and blue. Shine white light on a plant that absorbs blue and red light, and the reflected light will be that which is not absorbed, which the HVS calls green. It's no coincidence that the spectrum of human vision coincides with the spectrum of photosynthesis. Visual systems work best at wavelengths where there is the most light, which are, of course, the same wavelengths that photosynthesis uses. Being able to see leaves is a good idea for any herbivore. Being able to discriminate between nourishing young growth and old leaves is also beneficial, so being able to distinguish shades of green would offer an evolutionary advantage. In a world of leaves, anything that isn't green might be a predator, so non-herbivores could also benefit from color vision.

It seems reasonable that vision began as a monochrome sense and that the ability to distinguish colors evolved later. Without going into great detail at this stage, it should be enough to say that color vision depends on having more than one light sensitive mechanism, each of which senses a different part of the spectrum. The relative amount sensed by each mechanism would be some function of wavelength.

There are two difficulties associated with evolving from monochrome to color vision and these relate to sensitivity and resolution. If there are multiple types of sensor, the incoming light has to be divided between them, so the sensitivity in low-light conditions goes down. In humans this is dealt with by having two visual systems sharing the retina. Only the central part of the visual field has color vision, which is possible in relatively bright conditions. In low light conditions, the central part, known as the fovea, loses effectiveness and the rest of the retina, which has no color vision, takes over.

If we adopt the terminology of imaging and talk about pixels, then if all the pixels in some sensor have the same spectral response, there will be no color vision. To obtain color vision, there must be photosites having different spectral responses. For example, in a CCD or CMOS sensor using a Bayer pattern, four photosites are needed to create one pixel. These are typically two green, one red and one blue in a two by two array. If there is a monochrome eye that has evolved photosites or receptors of a certain size, then a simple adoption of widely differing spectral sensitivities where a set of receptors is needed instead of one must result in a reduction of resolution. The effect is seen in multi-spectral cameras used in surveying satellites. They offer less resolution than narrow spectrum cameras. Reduction in fitness runs counter to evolution and so this approach could not evolve. 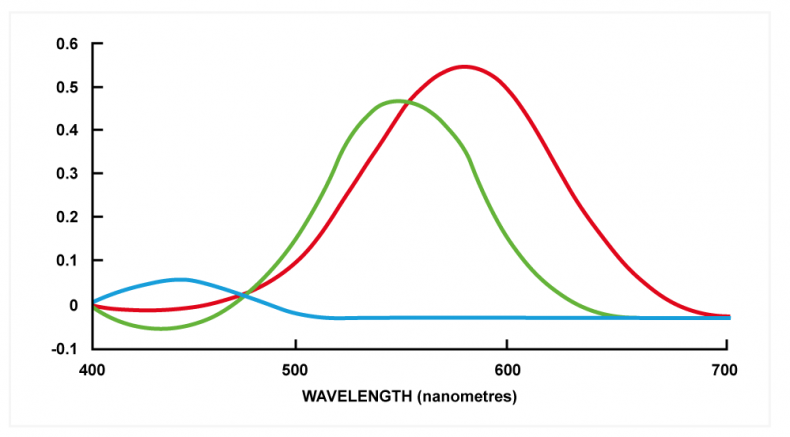 In living things that are nocturnal, vision has to operate using moonlight. Evolution favors monochrome vision at low light levels and frequently there is little or no color discrimination. Some living things manage with only two different receptors. In the HVS there are three different receptors, but there is considerable overlap between their responses, so to get the best resolution any type can be treated as a pixel. The compromise is that human color acuity is poor. As a spectrum analyzer, the HVS is complete rubbish and it is inappropriate to think of human color vision in that way. Human color vision and color imaging technology can only be understood by appreciating the shortcomings of the HVS. Were it not for the limitations of the HVS, color television, printing and film as we know it would be impossible.

Fig.1 shows the response of the HVS to various wavelengths. Note that these curves do not describe the vision of any one individual. Color vision is racist and sexist and significant differences exist between the color acuity of different people and peoples and between the same people at different times. Color blindness is a blanket term, whereas the reality is that many people have different levels of ability to distinguish colors. Red/orange distinction is poor in more men than women.

The term false color is sometimes found, where colors visible to humans are substituted in images formed at other wavelengths. In fact, all color vision is false. What we call color vision is the type of false color that has evolved in humans as a way of depicting certain aspects of the visible spectrum. As it is the only way we can see, we call it normal. Many people only become aware they have color blindness after being tested. What they can see is normal for them. Other living things may have a completely different impression of the same scene. We often describe objects by their color, yet, objects themselves have no colors. Real objects have a spectral response. They reflect light at some wavelengths and absorb it at others. However, the result to the HVS depends on how the subject is illuminated.

The curve peaks in what we call green, where sunlight is strongest and where the dominant reflected light from chlorophyll is found. The relatively poor response to blue light makes nonsense of its use on emergency vehicles. Choosing a light that matches your uniform was, how can we put it, not very bright. Worse still, the HVS doesn't have achromatic lenses, so blue things tend to be out of focus. We should remember that absolutely no psycho-optical input went into the choice of the frame rates we currently use in film and television, and those choices weren't very bright either.

Oddly enough, to obtain a realistic picture, the monochrome camera must have a brightness response that looks something like the sum of the curves in Fig.1. Early monochrome photographic films didn't have this characteristic. They were orthochromatic and did not register visible light at certain wavelengths, so that some bright colors looked dark. It was only later that panchromatic films were developed in which the brightness of colors appeared approximately correct.

If we restrict our view to the photographic or videographic aspects of light, there are three series processes involved: the illumination, the reflective characteristics of objects on which the illumination falls and the effect of any filtering, deliberate or inadvertent. Change any one and the result changes. If we extend out view further, then the characteristics of the HVS have to be considered; both the optical aspects of the eye and the significant amount of processing that takes place. The HVS must define any camera we expect to work properly.

That list of processes gives an idea of where this series is headed. For most creative purposes in photography, television and cinema, a subjective understanding of the processes is all that is needed to avoid pitfalls. The goal will therefore be to explain color in that way and to avoid unnecessary mathematics, although some are inevitable.