A long chain of events is needed to see a color picture on a TV set. Only by considering every link in the chain can we strengthen any weak links.

When the HVS looks at some object and judges it to have a color, what is happening is that some spectrum of illumination is falling on the object, and the object superimposes its own reflectivity spectrum on the illumination to produce a third spectrum that enters the eye. The physics of the eye then applies its own response followed by the use of color constancy in the brain. The chain of events is long enough when we look at things directly. It can only get longer when we look at a display driven by a camera looking at the illuminated object. It gets longer still when the camera and the display are some distance apart and some encoding system connects them. It may be a trivial matter to conclude that the color looks odd at the end of such a chain, but it's a different thing altogether to say what is causing the problem.

When I was a young photographer, I would often be disappointed in the transparencies I had shot because the color was wrong on a lot of them. The problem wasn't the camera or the film, it was the color temperature of the light, added to the fact that color constancy impaired my appreciation. The problem was also my lack of knowledge. I wasn't the only photographer who didn't understand the topic, and it was only through involvement with television that I got the necessary grounding in colorimetry and realized it was a neglected subject.

Thanks to metamerism, color TV can work with just three primaries, which is good. It also allows efficient artificial lights to be made that appear white. That is not so good. These non-black-body light sources do not have continuous spectra and are not white in the sense of white noise in electroacoustics. Nor can they have a color temperature because no heated body could reproduce their spectrum. Instead they are described by correlated color temperature, (CCT) which is the temperature of a black body that would produce not the same spectrum, but a metamer of that spectrum.

The problem is that metamerism is a feature of the HVS and it only works on the light directly entering the eye from the source. We really can't tell the difference between the color of daylight and the white directly from a fluorescent or LED light having the same CCT when illuminating white paper. However, once we try to illuminate a real object having a real reflectivity spectrum, the reflected spectrum cannot be the same as it would be if illuminated by daylight. An artificial light that looks white to the HVS may have a spectrum with gaps in which there is hardly any light at all. Some colored object that reflects strongly in one of those gaps can look a lot different to the HVS and to cameras than it does in sunlight or light having all wavelengths. 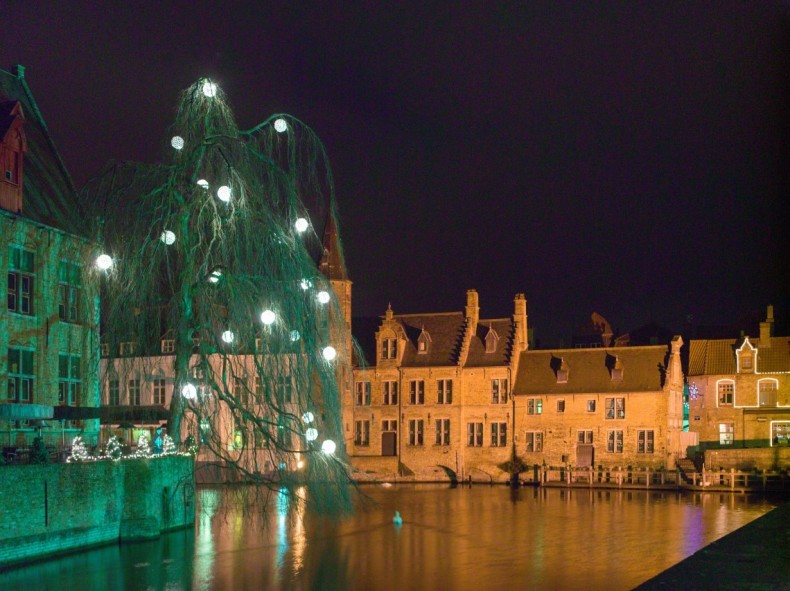 Fig.1 - In this photograph of Bruges, the "white" lights in the tree are not incandescent whereas the floodlighting of the buildings in the background is. The result is the building on the left takes on a green tinge. (Mamiya 645, shift lens)

Anyone with an interest in color accuracy, photographer, videographer, artist, decorator etc., needs to be on the lookout for "white" light that is not actually white. A "white" light that is adequate for one purpose may not be adequate for another. For critical applications, we have to worry about two color spaces; in addition to selecting suitable primaries for our displays, which then define the camera filters, the color space of the illumination has to be considered too. In both cases the color space must be continuous and the color space of the illumination cannot be smaller than that of the camera. Any time the term correlated color temperature comes up, we need to be suspicious that the continuity may not be there. Some wavelengths may be missing.

Originally metamerism meant the existence of different spectra that looked the same to the HVS. However any colorimetric failure due to the discontinuous spectrum of lighting has also come to be called metamerism. Usually it's clear from the context. In an attempt to deal with these metamerism failures a new parameter called the color rendering index, CRI, was dreamed up. This was supposed to give an idea of how much or how little metamerism failure could be expected from a given form of illumination. Whilst the idea is laudable, physics says it can't work because it's simply not possible to describe how well, or badly, a discontinuous spectrum of light reflects off an infinite range of real objects using a single number. Primarily to avoid metamerism problems, the incandescent light, whether having a filament or an arc, stayed in service in film and television for a long time despite its inefficiency and waste heat simply because it was a proper white source with no gaps in the spectrum. 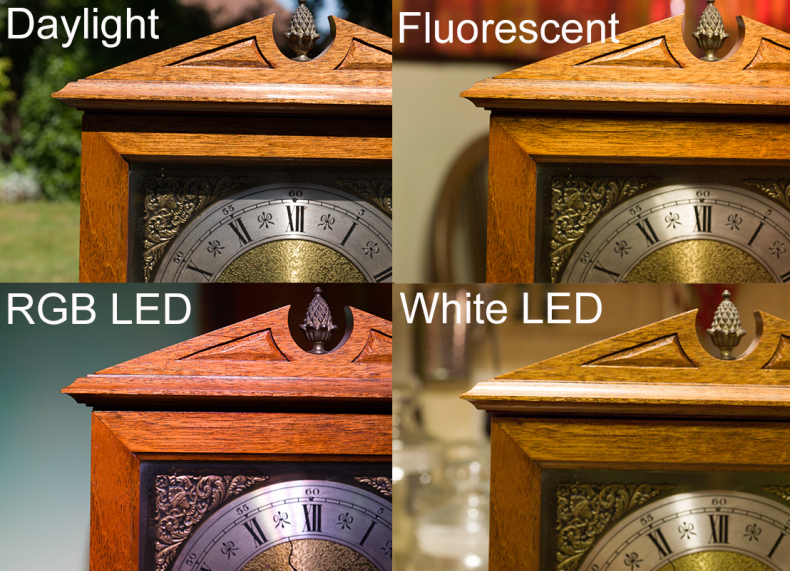 Fig.2 - The same mahogany clock was photographed with four different light sources, sunlight, fluorescent tube, white LED and RGB LED. The pictures were balanced to get the silver and gold of the dial more or less similar, leaving the appearance of the wood dramatically different in each. It is impossible to match the wood using color correction as with narrow spectrum light sources the information is simply not there. (Mamiya 645, macro lens)

White lights are now available that use red green and blue LEDs and can give an acceptable white for some purposes, as well as being able to produce a range of colors by adjusting the primaries, just as a color TV does. However, the spectrum of a typical RGB LED array contains three very narrow spikes and the rest of the visible spectrum is simply not present. There have since been a couple of refinements of that idea. In the RGBA light, there is also an amber LED. The increased number of primaries reduces the chance of a metameric failure with objects of certain colors. In the RGBW light there is an additional "white" LED whose purpose is to facilitate desaturation by adding white to the mix. In practice the more different wavelengths are present in the illumination the better the CRI. Now that LEDs are available in a wide range of wavelengths, it should be possible to make an ROYGBIV LED that approaches daylight. I am not aware of such a thing on the market, so that might have to be a project for a rainy weekend.

Even if the CRI did work, in real life the photographer and the videographer have to operate where they find themselves. Outside of a studio, the chances of anyone knowing that the lighting even has a CRI are pretty slim and the chances of anyone knowing what it is are negligible. It's not unusual to find light sources in the same area that have different CTs, CCTs and CRIs. It comes down to finding out for oneself.

Fig.1 shows a nighttime picture in which there is more than one type of light source. I color corrected for one source and the result is that some buildings are a plausible color and another one obviously isn't. A proper global color correction isn't possible, although applying different color correction to different areas would help.

The first time this effect really hit me was when many years ago I went to a wood store to buy some mahogany to make a case for a clock. I couldn't find any wood that looked like mahogany, and upon asking the proprietor I was shown some arboreal substance that looked very uninspiring. Looking up, I groaned; the shop was lit with "white" fluorescent tubes that we saw in Part 3 are notorious for being red deficient. Mahogany, of course is red, and under fluorescent lights looked anything but red, which is why I hadn't found it. To cut a long story short, I then had to explain just enough colorimetry to the shopkeeper to convince him that my request to look at the wood outside in natural light was not a pretext to run off with it.

It is no wonder colorimetry is a Cinderella subject when adhering to its principles is interpreted as criminal behavior. On going outside, suddenly the wood began to glow; on going back in, it became boring again. The shopkeeper was dumbfounded. Never mind the feather; I had knocked him down with a few photons.

I wondered how good my memory was and whether the light really did make a difference. I still have that clock, so I tried looking at it with my own eyes under various types of light. Sure enough, to my own visual system it still glowed in natural light and looked flat under fluorescent light. My digital camera could see it too. Fig.2 shows the dramatic differences in color between daylight, fluorescent, white LED and RGB LED lighting. There seems to be some justification for a photographer or videographer to carry a piece of polished mahogany as well as a Compact Disc as an aid to heading off metamerism failures.