Mobile Production and studios provider NEP has developed a software tool to help engineers quickly configure complex monitor walls in customers' mobile production units and studio control rooms. Called “The Wall,” it’s a new app for the Apple iPad that greatly reduces the time it takes to configure monitor walls and provides a unique and valuable tool to production teams.

The company said that in sports and entertainment mobile units, there can be more than 150 individual monitors displaying as many as 32 video sources each, with a number of options for style, configuration, and layout. Every production team has its own individual preferences, meaning that the monitors need to be reconfigured for each and every show, often with just hours from the time the mobile unit parks until they go live on air. 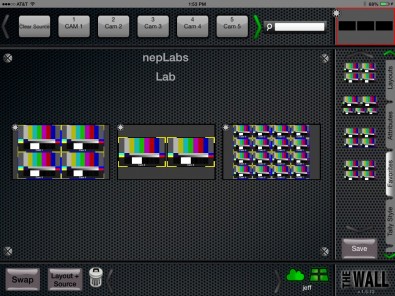 The Wall app empowers engineers, technicians, and members of a production team to set up their own monitor walls easily and quickly and make changes on the fly whenever they want.

Configuration of the multiviewer hardware that feeds these monitors has typically been a time-consuming and tedious task that required a mobile unit engineer, even for minor changes. With The Wall, NEP said it has created a solution tailored to the fast-paced and sometimes unpredictable world of mobile production, where rapid setups are required, and changes can arise at any moment. This app empowers engineers, technicians, and members of a production team to set up their own monitor walls easily and quickly and make changes on the fly whenever they want — without having to wait for the mobile unit engineer to go through a long configuration process.

“Compared to our previous manual processes, The Wall was like going from a rotary dial phone to an iPhone 5 overnight,” said beta user Kris Castro, technical director for a major sports broadcaster. “A configuration that used to take at least three hours now takes maybe 15 minutes. In addition to being a tremendous time-saver, The Wall has given me much more flexibility. Without having to involve an engineer, I can log in to the system and make necessary changes, or configure the monitor wall offline and then save the configurations under my name. If I want to use a configuration from last week, it's there and ready to load. And if I want to create a layout for a director I'm working with in three weeks, I can do it in advance and then just walk right onto the truck and patch the monitors in a matter of minutes. NEP has created an incredibly smart way of approaching this task.”

With The Wall, any user can configure monitor walls with drag-and-drop selection from a variety of monitor layouts and any of the available video sources. The Wall offers several easy and quick tools that allow users to customize almost every detail — such as border styles, colors, and tally views. A swap tool enables the user to rapidly swap video sources as well as whole screen layouts, with instant reconfiguration of the screen if the number of sources has increased or decreased in the swap. When finished, users can save screen configurations to a "favorites" list and recall them at the touch of a button in any NEP Mobile Unit enabled with The Wall — a valuable timesaver for touring productions that need to maintain the same video wall configurations from show to show.

Through connection with a server that controls the multiviewers on the trucks, configurations built into The Wall are automatically populated to the monitor walls in real time. Users can also work with the tool offline before they arrive on site, and then log on when they arrive at the mobile unit to instantly set up the monitor walls with the new configurations. The Wall is completely multiviewer-agnostic and provides seamless connectivity with all major manufacturers' systems.

“The Wall replaces a process that often takes hours and doesn't typically begin until the crew walks onto the truck. Now, the technical director or engineer can arrive at the venue with all of that time-consuming work done, and focus instead on the creative aspects of the show,” said Jeff Joslin, vice president, NEP Labs.

The Wall is currently in NEP's mobile units SS22, ND5, ND6, and SS18, and will be installed on 10 more mobile units throughout the remainder of the year.