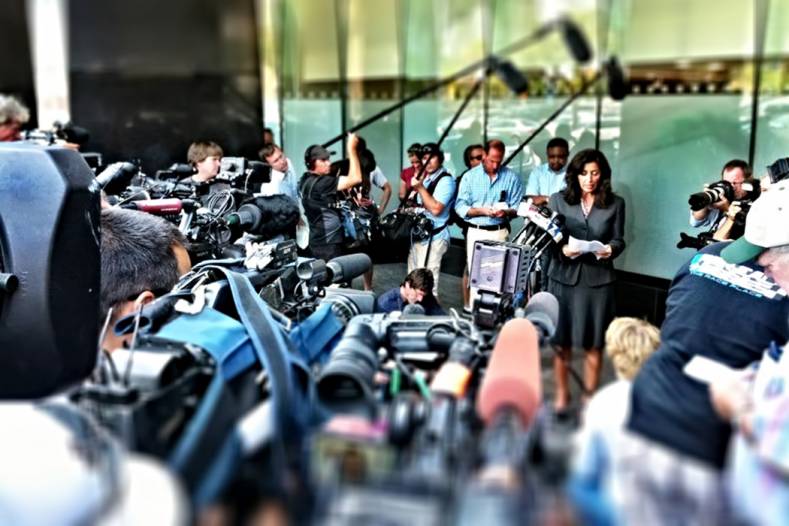 It can require a tall tripod to sufficiently raise a camera above surrounding photographers to capture the desired shot.

Getting high-perspective shots isn’t a matter of art but often a necessity for news shots. Under intense deadlines and demand to capture the right shot, news photographers are always on-the-go, and that can sometimes mean last minute assignments or worse, arriving late to a press conference. Fortunately, Sachtler has two solutions to help camera operators get high-perspective shots quickly and easily!

Let’s set up a little scenario. You are a young camera operator on your first presidential pool assignment in Europe. Your job is to get a video shot of the President of the United States exiting his limo and walking into the front door of Windsor Castle to meet the Queen. You are warned before the assignment that if something happens to the president in those 30 seconds and you miss it, your career in news is finished.

Those words can put the fear of God into a young camera operator. News networks often call such events “the money shot” and the nation’s media depends on them should the worst happen.

The intense pressure aside, the shot itself may not sound so difficult. But you are seldom the only camera operator competing for the same image. Others from assorted media outlets, perhaps on a less stringent schedule, may have already staked out the best camera positions before you even arrive on the scene. Because your career is on the line, it can get pretty rough elbowing and arguing your way into a good camera position.

Today, it has gotten even worse for TV news camera operators. Fortunately, there is now a better solution than fighting your way through to the front of the camera line. Sachtler has created two tripod systems that can be quickly extended to elevate the camera above the heads of others. For news cameramen, these tripods are a tried and true secret weapon for winning the news shooting wars.

The most popular of these two tripods for news, called the HotPod, employs a spring-loaded pneumatic column that can lift cameras weighing up to 55 pounds to a lens height of over 6.5 feet — high enough to shoot over the heads of any competing camera operator. The HotPod was originally designed in 1981 for news photographers and camera operators on the go who arrived late to news events and got stuck in the back of a line of television cameras. 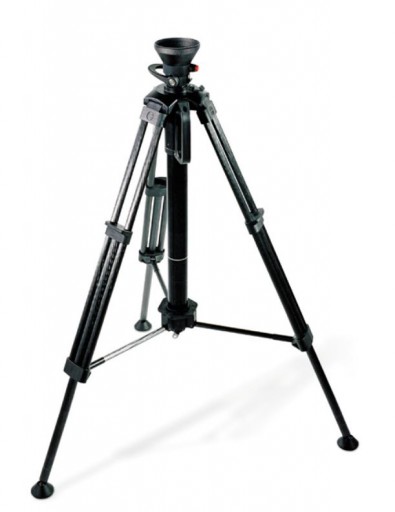 The product remains one of Sachtler's most celebrated cult favorites in the United States because it's easy to use. In fact, setting up the HotPod means simply pushing down a single locking release. These reliable carbon-fiber sticks can mean the difference between getting a great shot or no shot at all.

And according to Barbara Jaumann, Sachtler's Global Product Manager based in Germany, the HotPod was widely used in the recent 2016 U.S. presidential election and is a favorite of American news camera operators. The reason is simple. It’s a secret weapon to providing job security for camera operators who know they can always get the “money shot.”

For example, KDFW Dallas has at least ten HotPods in their arsenal. Why?

“Speed,” explained Bob Hawman, Chief Photographer at KDFW. He continued, “For newsgathering, being able to come in, set up and begin shooting almost immediately is critical. It’s faster than anything else out there because you’re able to adjust all three legs at the same time. Because of the HotPod’s weight, you can extend the legs and balance it quicker. You definitely have to get used to it. There is always a learning curve for new photographers but if they can figure it out – most don’t want to switch to anything else.”

Since the HotPod was introduced, a second tripod that allows camera operators to get high perspective shots was also introduced. With a list price of $2,400, Sachtler’s Soom is a four-in-one product that is extremely easy to use. The Soom can act as a tripod or have the middle column extended to get an extremely high perspective.

In addition to the extension capability, the middle column of the Soom can be detached to act as a monopod and the mid-level spreader can detach to become a set of baby legs to get very low shots. The Soom tripod is made from aluminum and weighs 12.8 pounds. It can carry a camera weighing up to 44 pounds. 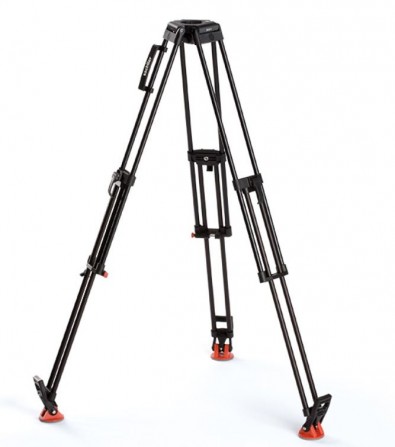 The Soom tripod is a flexible, creative tool for camera operators who may own only one tripod but still need to do a wide range of shots.

As a single system, the Soom allows almost continuous adjustment of the camera’s lens height from approximately 34.6 inches to 88.6 inches. Though the Soom can be extended, it is not as quick or simple to extend as the HotPod. It is made to be a more flexible and creative system than the HotPod, which is targeted specifically for news. Another difference is that the Soom is equipped to take 75mm heads only, while the HotPod now has accessories that allow the use of both 75mm and 100mm heads.

Jaumann said the HotPod is faster to set up than the Soom and therefore better suited for news camera operators. “The HotPod has a spring inside,” she said. “You don't have to lift the camera. You just release the column, and it moves up.

“The Soom, on the other hand, is a more flexible, creative tool for people who just have one tripod but need to do a wide range of shots. It can also be used for news, but the target market is independent content creators who do documentary-style work.”