Over the past five years, cameras have gotten more compact in size and lower in cost. Accessories that allow highly specialized production shots have followed suit. Today, jibs, dollies, stablizers and sliders that used to cost thousands of dollars are accessible to most videographers.

A good tripod and head is an essential investment for every video crew. But the added gear needed for that special shot used to be so expensive it was a rental only item. That has mostly changed with today’s smaller DSLR video cameras.

Lower cost, however, doesn’t mean video crews need to own everything. It depends very much on the kind of work the crew typically engages in and whether a given tool will bring value to a typical shoot. This is where a knowledgeable decision is needed. Jib in the desert.

Take jibs, which allow camera operators to get dramatic angles in high, fly-over shots. Jibs, due to their large size, complexity and high expense, used to be consigned only to rental houses. Larger jibs continue to be a daunting item that can be difficult for most videographers to operate. Smaller jibs, however, are now more affordable and simpler.

A major question with jibs is how high must the camera reach. The taller the jib’s arm, the bigger the footprint on the ground that’s needed. Modern jibs can come with electronic controls that allow users to pan, tilt, zoom and focus. Cheaper jibs may not do all these functions.

Less expensive jibs ususally have a flat plate for mounting the camera. If you need to tilt the head, you’ll need to mount a camera head on the jib. You also may need to tilt down as you raise the jib’s arm. Some jibs are made for this counter move and others aren’t. Most jibs also require some kind of counterweight.

Affordable jibs are the VariZoom Solo Jib ($289), whose two-stage telescoping arm goes from 38 inches to a length of 9.2 feet (with a five-foot tripod). It has a telescoping tail for counterweight adjustment. The ProAm USA Orion DVC210 ($249) is a two-piece system designed to hold up to 10 pounds. The arm extends to five feet from the fulcrum point. The camera can auto-tilt to remain level.

The Kessler Pocket Jib Traveller ($499.99) mounts on a tripod and collapses to 27-inches with requiring disassembly. The maximum length of the arm is 72-inches from the fulcrum. It has a center-mounted mounting plate but does allow for counter moves. 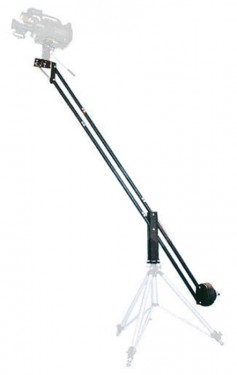 Glidecam’s Camcrane 200 ($569) has four length combinations that range from three to eight feet and three fulcrum settings. It holds cameras up to 25 pounds at eight feet and 30 pounds at 6.6 feet. It folds into a unit that is 3.3 feet long.

When using these affordable jib solutions, the shots can be more dramatic. Larger jibs, can be even more dramatic, but are cumbersome to set up on location and require specialized crew members. Jib size is determined by the shot.

Another useful production tool is the dolly, a device designed to provide smooth rolling camera movement. Dollies come in all sizes, from small tabletop systems to full-size systems that run on rail tracks. Dollies are quite valuable and add motion to many types of shots. In larger scenarios, dollies are normally used on tracks to ensure smooth shots.

The most basic dolly is a set of wheels that attach to the base of a tripod. For this to work, the studio floor must be very smooth. Most dollies, however, depend on a track system to ensure smoothness of the shot. Some tripod bases run on tracks as well.

Low cost dollies include the Varavon Portable Track Dolly ($675), a set of dolly wheels that connect to the user’s tripod. The wheels fit onto rubberized track pieces that’s 16.4 feet long, built in 3.3 foot increments. The kit comes in a hard travel case. In the more traditional sense, the Matthews Doorway Dolly ($1,885) is a platform with steerable wheels that can hold up to 800 pounds. Available accessories include a turret that features a camera mount and a seat for the operator. Also there is the Cambo VPD-4 Multipurpose Wheel Dolly Kit ($5,195), which can be used as an on-track or off-track dolly with a change of the wheels. The tracking wheels are designed for universal 24.4-inch tracks.

As with jibs, larger dollies can be more difficult to set up and use. Track systems work very well, but can be expensive, take more set-up time and require extra crew members for installation.

Sliders are primarily designed for achieving side-to-side camera moves. Parallax effect makes a slider move better than a basic pan. The background changes differently, providing a different effect than if the camera is simply pivoting around a static point. There are a variety of sliders on the market with different mounting options for the base and the camera. Some have simple legs that are placed on a table while others mount on a tripod. It again depends on the kind of work a crew does.

Some lower cost sliders include the ikan 31-inch Carbon Fiber Camera Slider ($179), which uses 19mm carbon fiber rails. The slider weighs 1.5 pounds, yet is able to support loads up to 18 pounds.

The Edelkrone SliderPLUS Small ($399.99) uses a tracking mechanism that allows the rails of the slider to move with the camera when mounted on a tripod. This gives the slider 15.7-inches of sliding range in a unit that is only 13.2-inches long. The slider supports loads up to 17.6 pounds.

The Benro MoveOver12 Crank ($749) is a dual carbon rail slider with a flywheel. The carriage features four bearings that allow it to glide across a pair of 22mm carbon fiber rails for smooth and quiet operation. The Redrock Micro One Man Crew Director ($2,450) features a 36-inch motorized parabolic slider that adds cinematic motion to a video without needing a dedicated operator. It is quick to set up and uses intuitive controls and laser-assisted subject placement.

Finally, one area with the most radical improvement are the floating stabilizers, which stemmed from work on the original Steadicam system.

From simple handheld stabilizers to vest systems, floating stabilizers offer smooth shots while the user walks. It also maintains the ability to control the side to side and up to down pivot. Dozens of models of portable stabilizers now exist with the prices falling quickly. An example of this is Tiffen’s Steadicam Solo Stabilizer and Monopod with Vest Arm Kit ($949.99). It provides a stabilizer system when used with the arm vest enabling stabilized camera work while transferring the weight of the system to your body, lessening fatigue and allowing for longer operating time.

The kit supports up to 10 pounds of camera and accessories and can be used as a vest arm camera sled, a handheld stabilizer or a monopod. The Solo incorporates a three-axis gimbal for smooth floating shots and folds down to 24-inches for transport and storage.

One caveat, though these devices are advertised as being simple to use, practice makes perfect. Steadicam operators undergo rigorous training. It also takes practice to achieve good results with the smaller units as well.

There have been incredible advancements with these categories of camera support gear in the past five years. They offer tremendous production value for money. Many are now affordable, though you may or may not want to own them.

Before you decide to make a purchase, try the tool you are considering and see what it can do (or not do) for your shoot.