For the past two and a half years Belgian broadcaster VRT—in partnership with the European Broadcasting Union (EBU), and iMinds (a digital research and incubation center)— has hosted an in-house R&D testing lab called VRT Sandbox. The project allows broadcast engineers and product vendors to test new IP-centric ideas and workflows.

The demonstration area within the VRT broadcast facility in Brussels has hosted such technologies as encoding/decoding, 4K, and virtual reality projects related to education and other applications. The projects enabled VRT engineers to experiment firsthand new and emerging IP-centric solutions.

Two years ago the VRT Sandbox started working on what would be called the Live IP Project. The interoperability experiment was designed to prove that audio and video production workflows based on Internet Protocol (IP) and levered by applicable standards can be more efficient than a comparable SDI-based infrastructure. In the process, the VRT team discovered that a Live IP production environment currently is about 7 percent more expensive to build than a similar SDI plant. This is primarily due to the need for hybrid equipment. Even so, the long-term benefits of IP far outweigh the extra cost, which will certainly be reduced as IP becomes mainstream.

The LiveIP Project is the brainchild of Michel De Wolf, Director at consultancy firm DWESAM Engineering. He is a veteran television engineer and broadcast industry consultant who has also worked at manufacturers such as EVS. This experience enabled him to bring the two sides together to create a live IP workflow that incorporated technology from many different vendors and clearly demonstrated a high level of interoperability. The project might also prove to broadcasters that implementing an IP infrastructure could bring new cost efficiencies to remote production and automation.

The concept of relying on AES, EBU and SMPTE standards while also evaluating new ways of packetizing data and distributing it quickly and reliably caught on with the broadcast industry. VRT now hosts two to three different broadcasters each week with demonstrations on new ways of handling content.

In a few short years, the VRT-EBU LiveIP studio has gone from a one-camera studio to four cameras, all synchronized and color corrected via IP. This all-IP studio has already been used by VRT to produce live shows on its children’s channel Ketnet, as well as for programs related to the EURO 2016 soccer tournament and the recent summer Olympics. A close representation of it was on display at IBC 2016 and used to produce IBC TV. 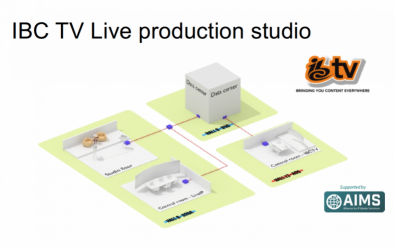 At the recent IBC Show in Amsterdam, VRT and the EBU worked with the IBC TV crew to provide an end-to-end IP backbone. Click to enlarge.

“The future is IP because an SDI cable has a limitation on the distance we can send a signal down,” De Wolf said. “So, if you have a studio, a control room and a data center, they need to be located quite close to each other. With IP, the data center and studio could be located at much larger distances from each other and still communicate as if they were in the same building.”

As an example of the potential impact on efficiency of an IP network, he said that with the current baseband set-up, VRT is using approximately 23 data centers dedicated to the production of its content. They are now planning to move to a new building by 2021 that will be entirely based on IP workflows. It will be connected to only two centers (which will serve as a main and backup), resulting in significant cost savings in electricity, cabling and ancillary hardware.

Among the challenges in building the LiveIP Project was replacing an existing SDI router. The solution involved a software define network (SDN) provided by Nevion and controlled by Nevion VideoIPath management software via Openflow; an industry standard protocol supported by many networking vendors.

“All of the equipment had to speak this new IP language and the standards available at the time being SMPTE2022-6, AES/Ravenna and PTP,” De Wolf said. He further noted that they soon will begin testing content production using the Video Service Forum’s TR04/TR03 and when available SMPTE 2110 protocols. This is the same set of protocols now supported by the AIMS initiative of equipment manufacturers. De Wolf continued, “So we had to replace an SDI router with an IP router and this is where Nevion comes in. Nevion is managing the entire routing scheme, not only on the network but they also provided an interface emulating a standard SDI router.”

In the studio, Nevion Media Gateways are used where needed to convert the signals back and forth between SDI and IP. For example, the many video screens on the production set require an SDI connection. The gateways make the necessary IP to SDI conversions to drive the monitors.

Most video equipment today is not yet equipped with SMPTE 2059 (PTP) support. The signals still have to be synchronized so Nevion equipment takes the PTP and coverts it to black burst (time code). A similar conversion is performed for audio signals as well. The EBU says that SDI technology will be phased out by the year 2025.

Conversion to IP will not be rapid

“The first move to IP is really an intermediate step,” De Wolf said. “It is a way for the industry to move forward. All the equipment we have now is mainly a replacement of something already in use in the SDI world. The difference is that the gear has an IP (Ethernet) connector instead of an SDI (BNC) connector.

“That being said, I think the equipment is not taking full advantage of what IP can bring to a facility’s workflow. Vendors are now thinking about this and how to take advantage of IP better.”

De Wolf said a big benefit for broadcasters moving to IP is that they can offer new services to viewers that they could not before. Using metadata encased with each IP packet, a channel could offer viewers multiple camera angles to switch between.

“Viewers could get a tremendous amount of information that they can't access today,” he said. “And when everything is native IP, you can transport a lot of metadata along with the audio and video programming, giving you additional workflows and the ability to re-allocate resources within a facility with multiple studios or among individual bureaus within a station group very quickly. That’s very compelling to large media organizations. “

Another benefit of IP is shareability. This enables broadcasters to utilize these remote data centers to collaborate with other stations in a group or to control a production remotely from a centralized location.

“VRT is expecting and hoping that the vendor community understands this and will provide new products that allow easy access to content and makes workflows simpler and easier to carry out,” De Wolf said. “They also understand that an IP network is resolution independent, so while today they are delivering content in 1080i HD, they could move to 1080p HD or 4K easily in the future without ever having to change the infrastructure.”

Whatever move VRT makes in terms of image resolution, the brodcaster has set their minds on an IP future. What’s needed is a smooth path to get there. That’s where the Sandbox comes in: helping the industry learn what it takes to replicate SDI capabilities while gaining access to more capability in an IP world.

Even with the work being done in the VRT Sandbox, virtually everyone agrees that the industry’s migration to IP will take time. The EBU released a report, which predicted that by 2020 they expect that more IP equipment will be sold than SDI equipment. Today the reverse is true. Between four and five years later (2025), SDI will be completely phased out.

De Wolf said everyone’s excited about the project. He believes their work will enable VRT to adopt an end-to-end IP technology strategy sooner than otherwise might have been possible.