This year’s NFL Championship Game at Levi's Stadium will be the most technically advanced ever.

This year’s Super Bowl 50 live telecast, on CBS, will feature the typical grandiosity that is “The Big Game,” with roughly three dozen “traditional” broadcast high-definition cameras, 36 more POV HD cameras and a few 4K versions as well capturing the action. As in past years, there will also be some “pioneering” technology that usually exemplifies the world’s most watched single day sporting event. Last year’s Super Bowl was the most watched television program in US history, reporting more than 114 million viewers, and Super Bowl 50 looks to top that.

To cover the game and all of the festivities surrounding it, a dozen production trucks will be on site at Levi’s Stadium in Santa Clara, California (home to the San Francisco 49ers), using Grass Valley, Ikegami and Sony cameras and Canon and Fujinon HD lenses across their crews. Veteran mobile production company NEP will send a total of ten itself, covering the main game telecast, the half-time show and ESPN International feeds, as well as other events. Literally miles of SMPTE Coaxial and fiber optic cabling will connect them to the stadium—to on-site graphics trailers as well as between the mobile vehicles, combining to create a virtual local area network within the truck compound.

New technology this year will include a new EyeVision 360 replay system that will consists of 36 box-style HD cameras that will be mounted around the 25-yard line to capture the whole field in 5K resolution all around the stadium. This will offer viewers a unique 360-degree perspective for replays as well as in-game action (e.g., what the defense or quarterback is seeing). CBS technical team has the ability to electronically stitch several of the camera views together for a more comprehensive look at the action in slow motion. 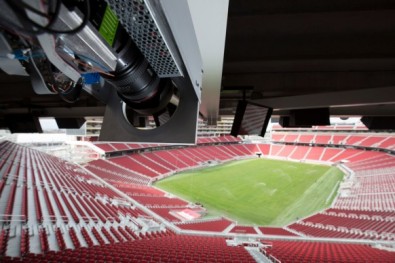 The EyeVision 360 replay system consists of 36 box-style HD cameras that will be mounted around the 25-yard line to capture the whole field in 5K resolution all around the stadium.

“It allows viewers to have a look in a moment's time from what the quarterback sees in the pocket to the safety's perspective or other points on the field,” said a CBS spokesman.

Another impressive feature these cameras are capable of is superimposing a virtual line in the play, like a transparent pane of glass. That ability to add a graphic, combined with the 360-degree rotation around the play, means fans will be able to see if the ball goes past that transparent pane. Since there are 36 cameras all working to render into single 360-degree view, the technology isn’t for live broadcast, but it will take replay video to the next level.

Putting cameras inside the pylons at the end zone lines have become a staple of NFL coverage and at the Super Bowl these “Pylon Cams” will be upgraded with 16 small 1080p HD cameras mounted inside eight foam pylons that mark the goal lines. These pylons will also feature embedded microphones to further enhance a field-level perspective of the live broadcast.

The television network will also incorporate the use of the NFL’s “Next Gen stats,” which tracks player movement and provides real-time matchup statistics during the broadcast.

The ubiquitous SkyCam, cable-suspended camera will also make an appearance, as it has all season long for CBS’ NFL coverage. The SkyCam WildCat system includes fiber-optic transceiver technology from MultiDyne to send the signal from a Sony HD camera head to a control booth situated at the top of the stadium and then incorporated into the live broadcast (at the director’s discretion). The WildCat SkyCam can soar through the air at more than 25 miles-per-hour—that means the camera rig can literally outrun the players. The SkyCam uses a fully active four-axis stabilization system, which each have feedback loops that are also stabilized. 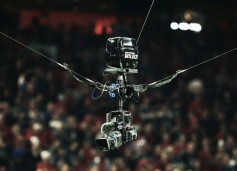 The SkyCam WildCat system includes fiber-optic transceiver technology from MultiDyne to send the signal from a Sony HD camera to a control booth situated at the top of the stadium and then incorporated into the live broadcast.

The production company NEP will have 11 Production trucks across the Game, Pre Game, Half Time, Post Game, World Feed and other game related projects, as well as 23 trailers

Company spokesman said crews will be using roughly 130 Sony HDC series cameras; about 90 HDC-2500s, 12 HDC-4300s and 18 HDC-1500s during the game and the pre, half and post elements. Trucks are equipped with Sony’s OLED Master Monitors and XD Cam Decks. Sony is also supplying a prototype Ultra High Frame rate camera for the event.

Florida production company F&F will use their GTX-17 truck equipped with 14 Sony HDC-2500 cameras during pre-game, half time and post-game programming.

In the weeks leading up to the Super Bowl, CBS Sports totally designed its on-air graphics look, with the help of the Troika Design Group, going for a “bigger, bolder look,” while also developing what it hopes will be a memorable Super Bowl opening segment.

SMT, a sports technology company originally responsible for the virtual First Down line in NFL telecasts, will also be involved in graphics creation on-site. It is unveiling new virtual technology that will be electronically inserted onto the field for this year’s Super Bowl. SMT rolled out new 3D graphics at the AFC Championship game and will unveil a new package for the Super Bowl.

Don Tupper, vice president of business development for SMT, said, “every single player in the game will be wearing a special data capture chip so the company can track a player’s every movement. With data coming in from every player 10 times per second, the new technology will quickly analyze it and predict the chances of success on any given play.

“Something happens—bang, bang—you’ll come back and see a replay, and we need to be ready to put down virtual graphics or statistics based on the data coming from the players,” said Hans Weber, vice president of research and development.

Information that typically isn’t available for a week, after statisticians pore over the data, will now be available live, in real time.

Of note: On the Friday before Super Bowl Sunday, in keeping with the 50th Super Bowl celebrations, CBS Sports will air footage from Super Bowl, held on January 15, 1967 at the LA Coliseum between the Green Bay Packers and the Kansas City Chiefs. Yahoo Sports reported that CBS has located the one remaining tape of the entire broadcast, but the owner wants $1 million for it—which the NFL has reportedly refused to pay (offering a lower amount). If a deal is not worked out, the network will air pieces of footage obtained by NFL Films and pieced together into a montage.