Refinements in the computerization of professional audio are making it easier for sound operators to mix more complex shows with multiple microphones in environments with more background noise.

At the recent IBC show in Amsterdam, Calrec introduced transparent broadcast automation, a new system for the company’s Apollo and Artemis consoles. It is designed to record the movements of a console’s channel and bus controls in real time — operating entirely in the background during a live broadcast.

“In principle, Calrec’s broadcast automation system is similar to traditional post-production and music automation systems, but that’s where the similarity stops,” said Karl Lynch, product manager at Calrec. “The fact that it is user-transparent is what makes it unique.”

The user transparency leaves the operator free to mix the show without the distraction of seeing automation controls on the surface. Once the live mix is over and the first pass has been recorded, the automation controls can be made visible on the console surface with a single button press.

Then the system allows the operator to tweak the mix. An on-screen editor can be controlled from the mix position, allowing the operator to locate any part of the show, replay the recording and make adjustments using the surface controls in combination with the set of editing tools provided. The console setup and automation data can be saved for post-production at a later date.

Calrec’s system comes in a three-unit rackmount size and is connected to the primary and secondary master controllers of the console, creating a redundant connection. The system provides video synchronization and machine control via nine-pin, LTC, MIDI and GPIO. It works alongside all major DAWs. 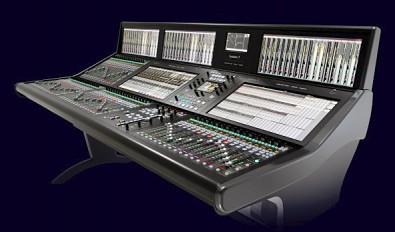 Unlike some other systems, SSL’s improved Dialogue Automix is not restricted to mono channels, but can be applied to any path format up to 5.1. Paths in System T have an additional gain element (so there is input gain, secondary gain and fader amongst other path elements like EQ, dual dynamics, insert, etc. ) to increase the versatility of the routing architecture.

The improved Dialogue AutoMix has a new Groups feature. There are eight independent Automix groups each with individually adjustable attack and release time constants. It also has a new Slave mode. Paths within a Group that are placed in Slave mode are automatically ducked when any Master in the group is active without the complexity of configuring a compressor or gate as a ducker.

SSL introduced Dialogue AutoMix in 2012. It is already implemented on the C10 and C100 HD Plus broadcast consoles, and the L500 and L300 Live consoles.

Essentially, it rides the faders to maintain a balanced mix in a program using multiple microphones. The feature assists mixers in managing live mics without having to continually ride individual faders to eliminate spill and room colorization.

Once a level has been set for each microphone, the system detects which mics are receiving an input and makes fast, transparent crossfades between them, freeing the mix engineer to focus on balance and sound quality rather than being chained to the faders.

These voice-controlled crossfades closely track unpredictable dialogue, eliminating cue mistakes and late fade-ups, while avoiding the choppy effects common to noise gates. The overall gain of multiple active channels is automatically adjusted to keep the overall output equivalent to a single channel, thus eliminating obtrusive fluctuations in background noise when more than one channel is contributing to the mix. Up to 16 channels can be controlled simultaneously.

The system provides a “weight” control on each channel which lets the operator establish relative priority for individuals when multiple channels are open at once. The primary use of the weight control is to enable the host to “talk down” other show participants. Raising the weight, increases the gain during ambience and increases the relative gain if that channel is active with other channels. 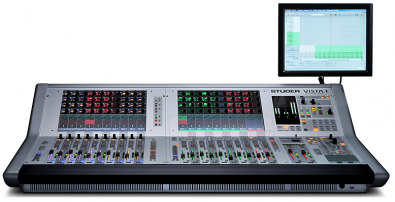 Studer has a feature called VistaMix, which is also designed for unscripted multi-microphone live events such as talk shows, game shows and discussion panels which suffer from both microphone spill and background noise.

With each active microphone added to the mix, the overall sound quality deteriorates. The result is decreased intelligibility and unpleasant comb filter effects (phase distortion).

Without this, the reaction time of a human operator will often result in audible fade-ins of people who start talking unexpectedly. Also, changes in fader positions can quickly lead to disturbing changes of the total ambience/noise level in the mix.

VistaMix increases gain for “talking” mics and reduces gain for all others. However, it does so very quickly and keeps the amount of total gain constant, so a clean live mix can be created. It offers the ideal solution for news operations when multiple mics are installed in the studio but the desk operator is not sure which ones will be used.

VistaMix switches on only those mics that are in use. VistaMix source channels may also be mix minus (N–X) owners. Each source channel has a weight control, which provides two possibilities: One, it allows the desk operator to add weight, or priority, to the main presenter such that if required he can “talk over” the guests or contestants. And, two, it allows the desk operator to give more gain in the mix to any contributors who have weak voices or are too far from their microphones.

The weight control may also be used during a show to adjust the relative balance dynamically. This function is set with the “knob assign” control.

This new feature is available to all existing Vista systems with SCore Live DSP engines. No additional hardware is required to the Vista surface and the new controls are implemented within the standard Vistonics screens and controls. 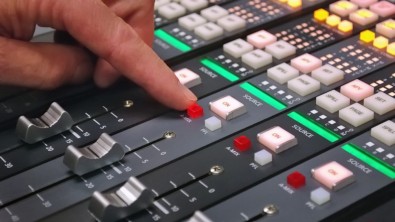 Wheatstone has an Auto Mix feature in its Dimension television audio consoles that carries out similar functions to other audio consoles.

“If you have, six people seated around a table or on a set having a discussion, the engineer needs to follow those mics, bringing up the ones that are actively speaking and keep the others pulled well down,” said Dee McVicker, a communications representative for Wheatstone.

“This prevents a comb filter effect. The mics sound hollow because each person’s voice is being picked up by his own mic and also by the mic of the person next to him as well as other mics in the room.”

Auto Mix, McVicker said, takes this out of the operator’s hands. “Instead of following the conversation and keeping his concentration on fading mics up and down as different people speak, the operator can broaden his attention and look at the big picture while the system handles this automatically. It senses when a mic is being actively used and brings it forward in the mix, while fading all other mics down.”

On the Wheatstone Dimension One and Three model mixers, each fader has an “auto mix” button which, when engaged, makes that particular channel a part of the automatically mixed group of mics. 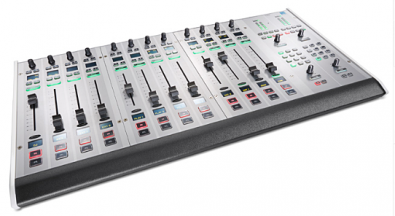 Lawo brought out its version of AutoMix and AutoGain as part of a software update for the Lawo Crystal and Sapphire radio mixing consoles.

AutoMix automatically adjusts the levels of active and inactive microphones, while keeping a constant ambient level. As a result, it eases the mixing and hosting of a talkshow. The console takes over control of the microphone mix, while the talent conducts the interview.

AutoMix reduces ambient noise from open microphones, while it keeps the overall volume of the mix at a constant level. AutoMix also works as a ducking function for voice-overs live on air.

Striving for greater simplification, Lawo integrated its new AutoGain feature so the talent can calibrate all microphone signals without understanding technical dB values and overloads. By the press of a button, AutoGain levels microphone analog gains automatically within seconds, while the talent talks into the microphone.