Jim Domke was a photo-journalist back in the 1970s. When practices changed, rather than working from the trunk of his car to needing a portable gear bag, Jim devised a fabric bag to carry bodies and lenses.

Before the year 1976, sophisticated soft camera bags or cases didn’t exist. Most cases for photographic and video gear of that era were hard-shelled, very heavy and made for rough shipping — not for producing media.

Some camera manufacturers did give away soft bags with their logos on them, but nearly all were just empty storage cases with no user design elements. One manufacturer of early leather camera bags quickly shifted to more profitable golf bags. 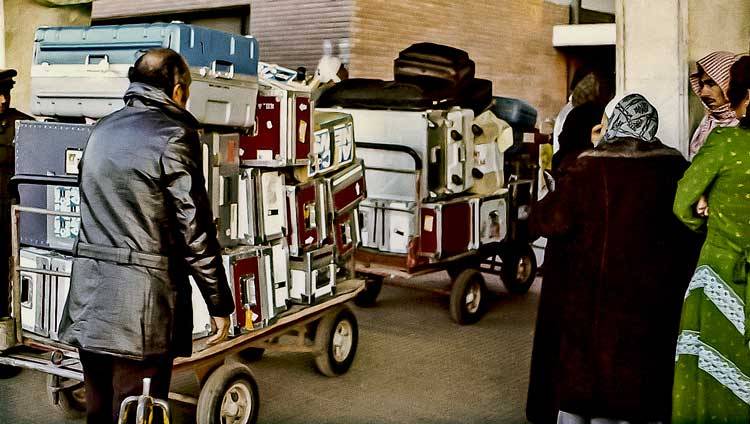 Carts loaded with head cases at an airport in 1977.

Working photographers before the mid-70s often used adapted fishing bags for assignments. It gave them quick access to gear as they carried the bag on their shoulder — rather than having to open a hard case each time an accessory was needed.

A popular fishing bag at the time came from Orvis, which was made of rubberized canvas and had a few extra pouches for storing accessories. The felt pouches that came with Chivas Regal scotch bottles were often used to protect lenses in the fishing bags.

In 1975, Jim Domke was a photojournalist and editor working at the Philadelphia Inquirer on the Sunday Page. A change of corporate policy at the newspaper changed his life. Rather than assigning a car to each photographer, the newspaper decided to create a car pool and have photographers check out a different car for each assignment.

This meant photographers could no longer use the trunk of their assigned car as a storage area for all their gear. For each assignment, the photographers would have to carry what was needed with them and often they didn’t know in advance.

Domke shopped around for a proper gear bag for the publication’s photographers. He came up empty. Near the newspaper’s office was a small shop that made custom canvas tents and awnings. Domke sketched out the fabric bag he wanted, got the newspaper to guarantee an order of 20 bags, and visited the shop to see if they would make them for him. The owner cooperated, seeing it as a way to get rid of many short rolls of fabric leftover from various projects.

A prototype bag was made for Domke just in time for the 1976 Republican National Convention that summer in Kansas City. Domke took his prototype bag to the convention and showed it around to other photographers for comments.

One of the most valuable came from then New York Times photographer Gary Settle, who suggested that Domke seat the gear vertically — emulating a six-pack of beer — rather than horizontally as in the prototype. Settle’s advice made it into the final design.

When Domke returned, the 20 bags were made and became instantly popular. A photography columnist at the newspaper wrote a column about the bags and offered to sell them to readers. Before he knew it, Domke had orders for 100 of the bags. At first, he planned to sell them only to other photographers, but as consumers caught on he knew he had something. 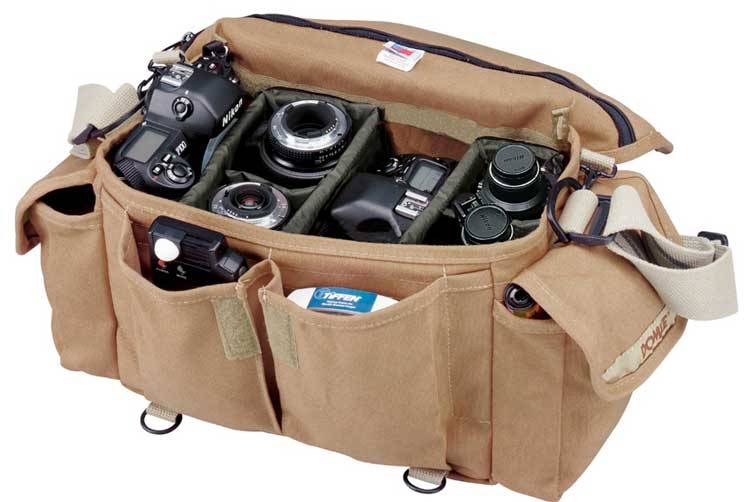 That camera bag was the original Domke F-2, still a top selling camera bag today and the preferred choice of the White House Photographer’s Association. Domke sold the bags himself for a while, but then sold his company in 1990. Today, Domke is owned by Tiffen, who has expanded the range of bags but keeps the original and very popular F-2 in the line.

Perhaps another secret to the bag’s success was the choice of material. It’s made with a very supple, heavyweight cotton canvas. The material breathes, minimizes the risk of condensation and is friendly to both equipment and clothing. It adapts to the body of the user. The fabric is naturally water-resistant, and — as it ages—softens and wears like a favorite pair of jeans.

Ironically, as time passed and imagemaking evolved, the Domke F-2 bag has remained popular with digital photographers. “It's amazing that we've come full circle,” Domke, now a freelance multimedia photographer, said. “When I sold my company in 1990, the video guys were still carrying the big cases. I don't think they carried any soft bags. Portabrace came in with the large video bags. My whole premise was a bag you could work out of. Now, in the era of the DSLR, the original design applies to video very well.”

Since those early days, bags and cases for all types of imagemakers have expanded to a variety of types for difference preferences, ages and applications. Virtually all use soft materials, except for some large hard cases made only for shipping. Air travel restrictions of bag size and type have also impacted the business, as has the diminishing size and use of the production gear itself.

Two of the newer case companies are Think Tank Photo and MindShift Gear. A founder and owner of both companies is Deanne Fitzmaurice, a winner of the Pulitzer Prize for photography in 2005.

Fitzmaurice got involved in the photo case business after trying to find a better way to move her gear in “a smart, efficient and comfortable manner.” Many of her problems involve travel on airplanes.

“It’s a big problem getting our equipment on airplanes,” she said. “There is no way you can check your bag with all that equipment. We've been working hard to determine the best ways to get equipment on flights. Every time I'm on assignment, I encounter something...some kind of a hurdle. Even though we design bags and I have hundreds of bags at my disposal, I still have to think about it on every assignment. Which bags do I want? Which is the best for this situation?”

Though her companies and others now make hundreds of different bags for a range of photographer preferences, Fitzmaurice, who is now a multimedia photographer, has two key preferences for her work. She uses a roller bag to get her gear to the location and then a smaller bag to carry gear while actually shooting.

“We design bags to get your equipment to where you are going. Then we design bags to shoot out of once you're on location and working,” she said. “My roller gets my equipment on the plane and to my location, or the trunk of my car. I then put what I need in my shoulder bag for work on the location.” 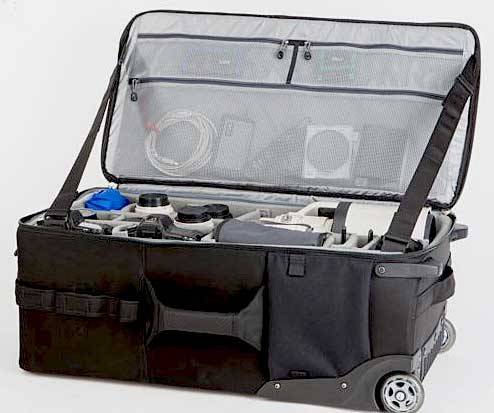 The Think Tank Logistic Manager roller caters for extra gear that is too big for carry-on.

She chooses the ideal size of roller bag to fit travel to the assignment. They range from small, airline-friendly roller cases, like Think Tank’s Airport International, to Think Tank’s much larger Logistic Manager 3.0, which she will ship under the plane when a lot of lighting equipment is needed for the shoot. She then uses a shoulder bag that might include Think Tank’s Citywalker 20 or a Retrospective 7.

The quick rise of multimedia, travel difficulties and choices about weight distribution and accessibility are driving the bag and case business today, said Fitzmaurice.

MindShift Gear, her new company, makes a 180-degree rotational backpack to solve the long problem of easy access to gear when carried in a backpack. An integrated camera waist pack rotates out of the lower section of the backpack to the front of the body. This allows instant access to cameras and other gear without removing the entire backpack.

A final design consideration that tackles an age-old problem is a basic, utilitarian outer look to equipment bags. “Most of our bags are black,” Fitzmaurice said. “We don't want it to look like you're a photographer.” Having gear stolen, apparently, is a perpetual problem for all shooters.