In the few years since broadcast news met bonded cellular, many stations and facilities have bought or leased bonded cellular systems. What started as an alternative to go live from places where masts or satellite antennas can’t be deployed, bonded cellular continues to mature and spread. It has also spawned its own new market of mobile journalists, known as MoJos.

These cellular-based products, systems and marketing ideas are changing to keep up with feedback and new possibilities. Several companies are now offering new programs and expanding the potential for wider simultaneous distribution of unique-source content to multiple destinations.

LiveU unveiled its second-generation internal and cross-organizational IP video distribution service, LiveU MultiPoint. The cloud-based MultiPoint service is integrated into LiveU's LiveU Central unified management platform, so broadcasters can share incoming live feeds simultaneously with multiple end-points over the Internet from within the same interface they are used to. The new service presents broadcasters with a highly cost-effective alternative to share content across groups with minimal delay, without satellite re-transmission costs.

From a LiveU field acquisition unit (1), to a LiveU Central interface (2), multiple destinations can be selected and fed (3).

Any existing LiveU server running the latest software can begin receiving and transmitting MultiPoint feeds. MultiPoint is fully integrated into the LiveU Central browser-based cloud management platform, where all other LiveU devices and applications are managed. It provides distribution of video with minimal delay for up to 100 concurrent destinations via the LiveU cloud distribution server, without requiring additional bandwidth at the point of origin.

Also, Panasonic Pro Video Group expanded its strategic collaboration with LiveU with the announcement of a firmware upgrade for its AJ-PX5000G, AJ-PX800 and AJ-PX270 series P2 HD camcorders with AVC-ULTRA recording. The new upgrade will enable an integrated camera and live video uplink solution that links and leverages the LiveU Central cloud-based management platform.

Dejero released LIVE+ Multipoint, a professional, cloud-based video over IP distribution network. It can be used to exchange recorded content or as a source location to feed multiple destinations simultaneously, with latency controlled and known at each end point.

Dejero's LIVE+ Multipoint leverages the Internet along with Dejero’s adaptive bitrate encoding technology and LIVE+ line of transmitters, servers, software, and cloud services to provide a resilient solution that encodes and routes the content from a single source to multiple destinations across the globe.

The LIVE+ Multipoint distribution network is managed from Dejero’s LIVE+ Control cloud management tool, accessible from any Web browser. Users can send low-latency streams to a LIVE+ Broadcast Server for traditional on-air playout via SDI, or to a LIVE+ Cloud Server for distribution to a Content Delivery Network (CDN) provider that serves multi-format content to web and mobile devices.

Dejero also introduced LIVE+ EnGo, a compact and modular transmitter. It encodes H.264 video and supports and transmits video up to 1080p over multiple IP networks. Modular design allows swappable wireless modules to customize it to the locally available wireless network infrastructure. The company also announced LIVE+ Control for managing its systems from any Web browser, and a new HD version of LIVE+ Mobile App for iOS, designed for mobile journalists (MoJos).

TVU Networks introduced TVUMe, a new IP video marketplace at NAB 2015. TVUMe enables users to sell and trade recorded video content and live video streams in a simple interface. Production crews can also use the TVUMe service to list production services and equipment for future booking, giving users access to professional video crews around the globe with the click of a button.

TVUMe’s interactive map feature enables searches for content via geographical location and purchase of live video content by identifying camera crews already on-location for time and location sensitive breaking news events. It also allows broadcasters to purchase pre-recorded content from an online marketplace to which any broadcaster, production service, or freelancer can contribute.

TVUMe contributors can use the free-to-download TVU Anywhere app, a powerful live transmission app for iOS, Android and Windows mobile devices, to instantly stream live video to the TVUMe marketplace.

As part of the integration with TVU Anywhere, TVUMe has a messaging function that lets broadcasters and users communicate directly in real time. The real time interaction between the news station and the camera crew can provide directions to the onsite camera crew to adjust the shot as it unfolds. 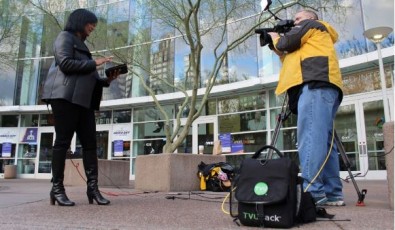 The Bitcentral Oasis solution delivers a sophisticated asset management and archive platform that enables broadcast stations to automatically archive stories, media and metadata with built in sharing and collaboration tools for seamless access for broadcasters from any location. 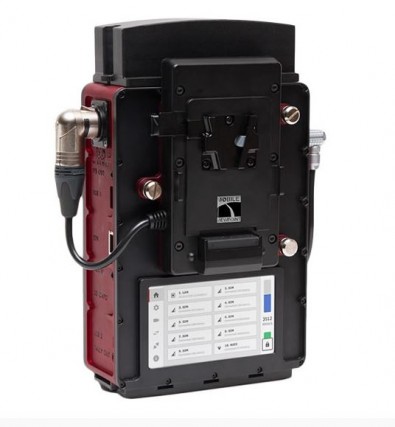 At NAB 2015, Mobile Viewpoint launched WebStreamur. It addresses a global marketplace for live mobile journalism and the growing popularity of watching video online. It uses YouTube to deliver live streams via WebStreamur channels on any device, creates revenues based on sponsoring, and uses Twitter for announcements and instant feedback.

With its debut, Mobile Viewpoint's WebStreamur also launched its own range of products including an App for MacBook, iPhone and Android and 3 dedicated appliances.

Webstreamur uses the IP bonding technology of Mobile Viewpoint, which can live-stream from any event using bonded IP channels. Online streaming via platforms like YouTube, LiveStream, Meerkat and Periscope open a marketplace for the delivery of live sports and other events that do not have the reach to attract major TV coverage. The company has primarily directed its initial marketing efforts towards college sports content.

Turkonet-Signal ENG introduced its HD 7000 Cellular Live Broadcast System mobile transmitter. It operates for 6 hours or more with 6 modems and can be used anywhere a 2g/3g/4g/ Wi-Fi/aBGAN/landline connection is available. All device features can be accessed and changed from any smartphone or global web interface. 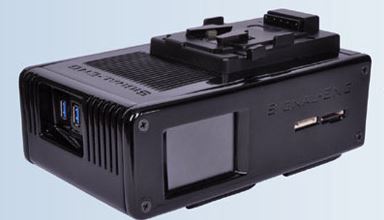 The new Turkonet–Signal ENG mobile transmitter feeds video from anywhere with a landline or better.

The HD 7000 takes HD-SDI HDMI or composite in up to 1080p/60, automatically supports NTSC and PAL, and it uses H.264 AVC High Profile encoding at 400Kbps to 20Mbps. Latency is an estimated 3-6 seconds. Cold-start to on-air takes approximately 60-90 seconds. It can also internally capture live streams it transmits.

From smart phones to broadcast television production equipment, market-shaking new microchips and hardware technology appears to have reached something of a temporary plateau while the markets catch up. The market pendulum seems to be swinging from "look at this" to "look at what this can do for us."  Empowerment is the new market trend everywhere, including broadcasting and the viewing audience. It just takes time for people to invent new uses for new powers that empower.