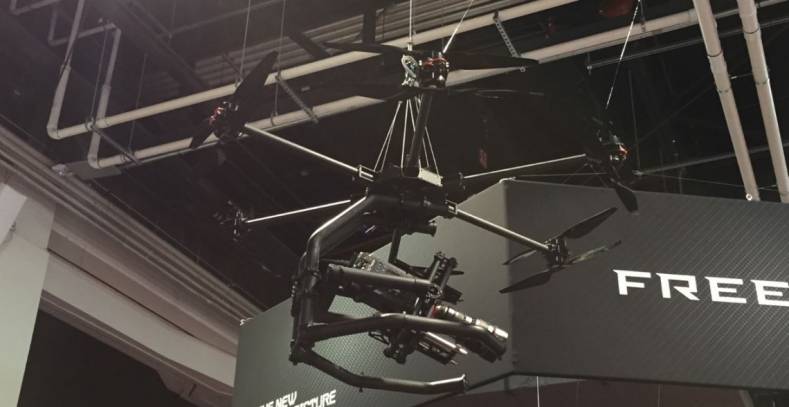 If there was ever a NAB side-show, the 2015 drone exhibits and sessions were it. Learning about drones and visiting drone-related exhibits demanded all the time the exhibits allowed and $1000 for weekend field sessions, which were reportedly “fantastic.”

Most UAV exhibits were oriented toward group demos and group basic training, and were as crowded as a NAB hit would be. A couple of months before NAB, drone interest intensified when the FAA announced proposed rules for commercial drone operation. After about two years of public review and comment, legal commercial drones may launch in early 2017. Everyone wants a piece of the action.

One of the most popular drones, the DJI Phantom sells for about $500 without a camera, which makes it an expensive toy. The same Phantom with an on-board camera is a serious professional airborne camera platform. More on-board and on-the-ground electronics make video feeds more valuable and controllable with extended range, higher quality and new features.

It began with a selfie

You may have recently seen that Nicholas Woodman, Founder and CEO of GoPro , is about to become the highest paid executive in America. While most industry manufacturers, stations and viewers were busy spending millions on the DTV transition in the early 2000s, Woodman was a surfer who wanted to get professional-quality action photos of himself. He turned his idea into the first wrist-cam, with which took the first “selfie.” Woodman raised some of the money to start his wrist-cam company by selling beads and shell belts out of his VW van. Today’s GoPro video quality and images rival the best from nearly any source. The camera’s performance, design, weight and low cost make it virtually ubiquitous on drones and quadcopters.

Many drones and quadcopters come equipped or can be ordered with a GoPro mount. What makes a quadcopter or drone a broadcast tool is the ability to feed live pictures. Don’t confuse live pictures with First Person Video (FPV). FPV feeds may contain flight data superimposed over the video. Nearly all broadcast-quality video is transported by a separate microwave path from the drone to ground receivers outputting HDMI or SDI for retransmission to the station.

A quadcopter/drone/UAV marketplace for broadcasters barely exists. Commercial operation isn’t legal. Liability and insurance are issues. Today’s market is military and government surveillance, defense, public safety and security. The market demands quality and range and can pay for it. As long as the market can afford high prices, the best gear will remain expensive. The good news is that as the technology gets smaller and lighter, the US market is on the brink of legalizing commercial flights. That scale will drive some prices down. When commercial drones become legal in the USA and other parts of the world, the market for live broadcast-quality drone video will hit the proverbial Las Vegas jackpot. Like planes in the glide path to McCarran Airport, the players in miniature microwave and smaller RF video transport systems began to align at NAB 2015.

Cellular network stability can be a problem in large areas with large crowds, such as sports venues. Some private systems emerged ready to tackle that problem. 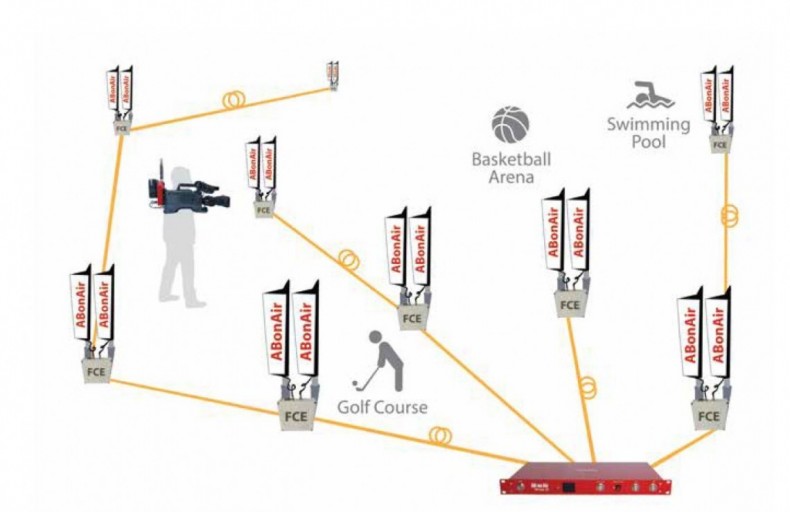 AB-Multizone can be deployed in multiple topologies for ease of
installation: daisy chain, star or any combination of the two, enabling
flexible topologies based on venue requirements.

ABonAir launched AB-MultiZone for flexible and seamless roaming coverage in areas such as large sports venues. It uses a single receiver connected to as few as two or as many as 250 Multi-In Multi-Out (MIMO) antennas and supports CCU control of Grass Valley, Sony and Panasonic cameras. 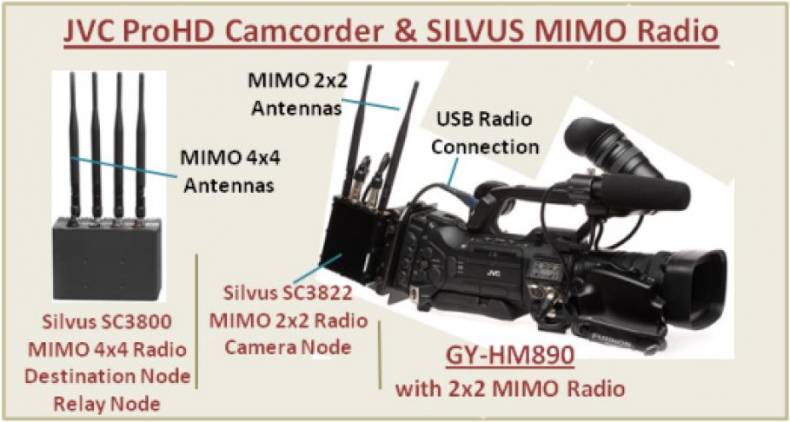 JVC and Silvus introduced a Private MESH Video Network to circumvent the cell system. It combines the best of both companies and is a 4 transmit, 4 receive channel MIMO system that uses an encoded IP stream directly from some newer JVC cameras. Its two-way communication also allows remote CCU control. 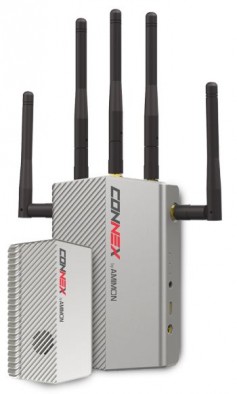 Amimon introduced CONNEX, a zero-latency HD wireless video link for UAVs. It operates in the 5GHz band and uses 2x5 MIMO and automatic channel selection. It transmits up to 1000 meters. The ground unit sends control commands to the camera gimbal via S-Bus protocol and has an OSD for telemetry data. 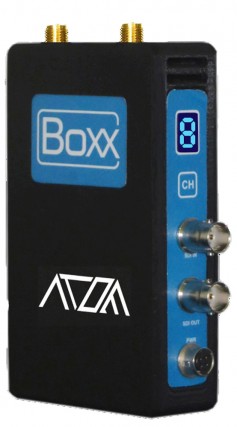 Boxx TV launched the Atom, a new zero delay video transmission system. It operates in the 5GHz band and has SDI, HD-SDI and HDMI inputs. The transmission method is Pixel Prioritisation Protocol. Range is said to be up to 5km point-to-point. The system transmits an up to 200mW, 40MHz wide OFDM signal to a receiver with dual SDI outputs. It supports all formats up to 1080 60p 3G. 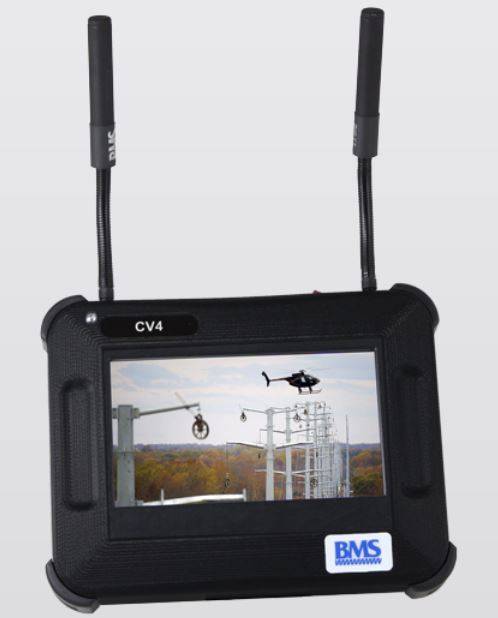 BMS introduced its Carry-Viewer 4 for monitoring, recording and replays.

Broadcast Microwave Services (BMS) introduced its Carry-Viewer 4 (CV4). The CV4 is a lightweight, hand-held, auto-sensing, 2-way diversity COFDM microwave receiver with built-in HD screen that displays live H.264 or MPEG2 video. It records and plays back, controlled by the touchscreen. It also provides HDMI out or IP streaming. 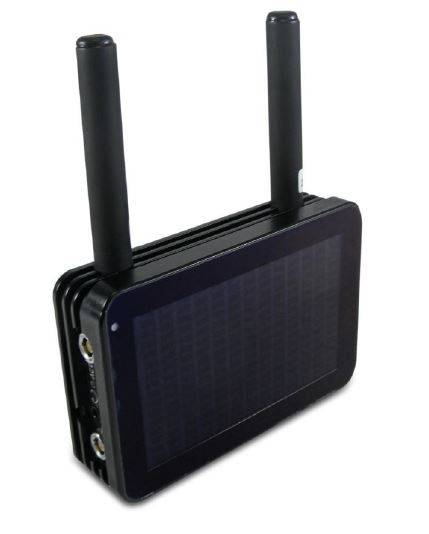 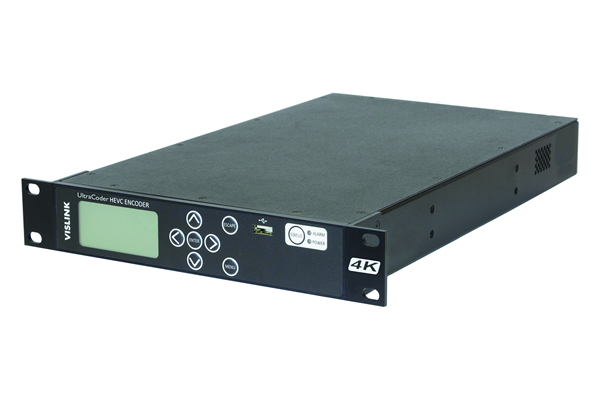 The Vislink UltraCoder is a H.265 hardware encoder.

Vislink launched the industry’s first H.265 hardware encoder, the UltraCoder. Designed for 4K, it can also deliver up to four live HD channels in H.265 plus an additional HD channel in H.264. The FocalPoint reverse-CCU was upgraded for multiple camera and operator control panel combinations and works with several Sony models and Hitachi’s RU1500. 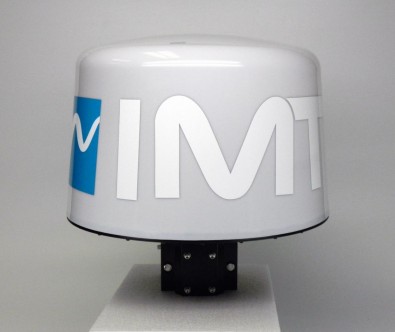 This outdoor pod is an integrated 6-way diversity receiver with antennas.

Also unveiled was the Nucomm Triple Play Receiver. It is a dual-diversity COFDM receiver that uses two-way maximum ratio combining technology to enable the support of Line-of-Sight (LOS) as well as Non-Line-of-Sight (NLOS) applications. While an excellent companion to IMT’s Nucomm microLite transmitter, it is compatible with any MPEG-2/MPEG-4 transmitter. The chassis houses up to three receivers in 1RU. 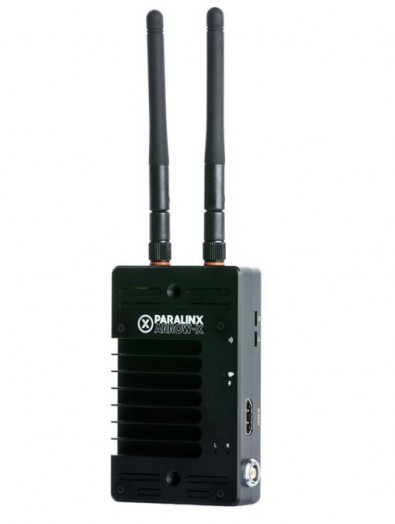 Paralinx showed its Arrow-X HDMI system. The realtime HD video transmission system has a range of approximately 700 feet with >1ms “glass-to-glass” latency. The Arrow-X transmitter features HDMI input at the transmitter and HD-SDI outputs at the receiver. A 3G-SDI transmitter is also available. It has a lightweight minimalist design for handheld, Steadicam, gimbal, and UAV payloads, and operates on the 5GHz band. Arrow-X transmits full-HD 1080p/60 with a range of up to 700 feet (215m) with default antennas. Longer range possible with optional antennas. 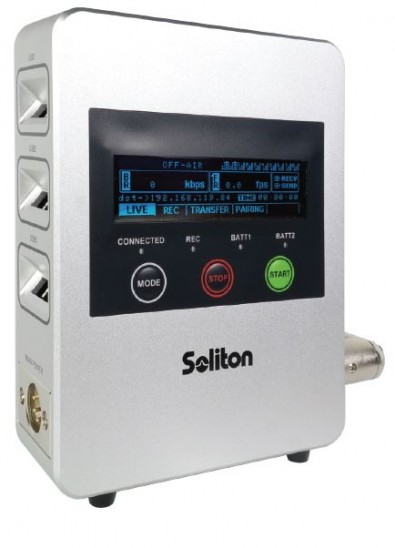 The company also introduced Live:Air, an iPad Production Suite that allows users to switch between pre-recorded material and live wireless video and add graphicss feeds from iOS devices and compatible Teradek encoders like VidiU Mini, VidiU, Clip, and Cube. One of the best features of Live:Air is that users can add graphics, titling and effects to the stream, even when only a single video source. 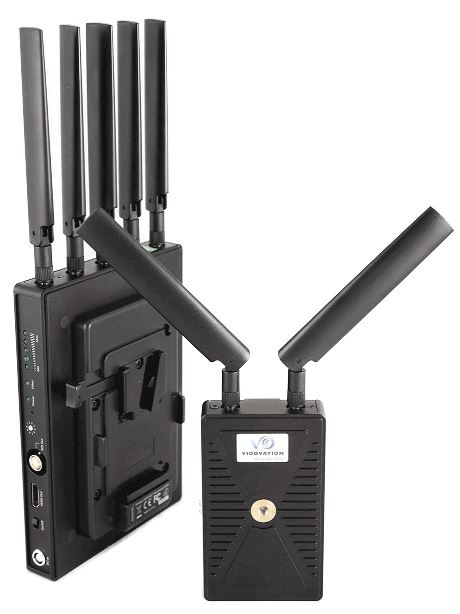 The VidOlink Reacher has no compression or latency.

The transmitter is compact and lightweight ensuring exceptional maneuverability. This makes the unit ideal for video assist and on-set monitoring, news and sports broadcasts, UAV, military, corporate and other applications in which typical wireless systems either fall short on distance or are too pricey. VidOvation was also appointed by AVIWEST as its U.S. distributor.

If there were an award for the most pre-NAB publicity, Videovation deserves it. The company trumped all competitors with more press releases and social media activity than any other in the miniature microwave category, perhaps even combined. The hyperbole brags ”We are passionate problem solvers making the ‘impossible’ and ‘never been done before’ a cost effective solution,“ which would be true for virtually everyone in this product category.

Want more information about drones and support equipment including streaming, transmitters and cameras? Here are additional The Broadcast Bridge resources:

Aerial cinematography goes up and under

Drones Take Off at NAB

Auto-pilot drones take to the air... and sea

RF in the air with NanoVue HD

Why fly an Octocopter?

Wear a Drone on your Wrist