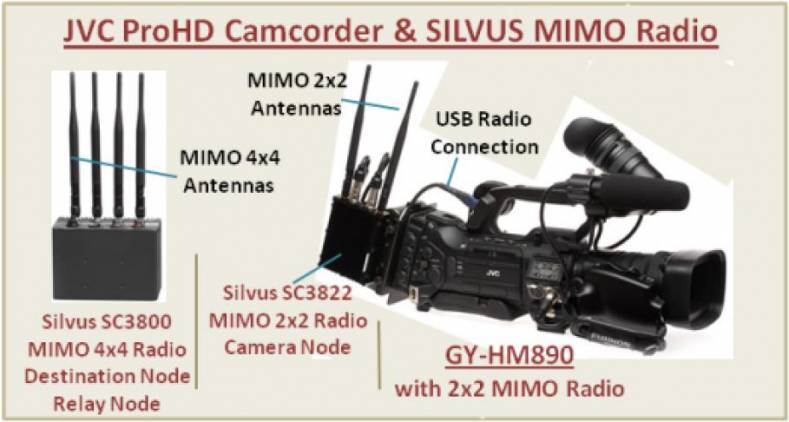 The JVC/Silvus solution provides a reliable link for field shots, which are often crowded with non-broadcast signals.

JVC and Silvus partner to create a reliable and fast wireless private network in public venues, which are often crowded with non-broadcast signals.

JVC's Private MESH Video Network solves public system congestion problems and provides bandwidth up to 85 Mbps, significantly greater than cellular and bonded cellular transmission systems. The independent, isolated network is built around the use of mobile MESH nodes that can communicate while moving without any kind of fixed infrastructure.

Although the JVC network was designed as a portable MANET (Mobile Ad-Hoc Network) system, nodes can be permanently installed in locations such as sports arenas or places broadcasters frequently return for live reports. The private network delivers much greater transmission distances than Wi-Fi, provides a secure direct encoded video stream, and features two-way communication allowinf camera setup and adjustment from remote locations.

Each node in the JVC system is a Silvus Transceiver Radio that serves as both transmitter and receiver, creating a flexible, self-managing, and self-healing network. Radio choices include a camera node that directly attaches to a JVC camcorder and receive an encoded stream directly from the camera (a JVC exclusive), mobile relay node designed for use in vehicles, fixed relay node for fixed locations within the wireless service area, and destination access point node that serves primarily as the receiver for live transmission or file transfer.

The network is simple to set up and requires very little knowledge to operate. Best routing decisions are made automatically, and the network can be administered from any radio. The quantity of nodes required to cover an event is subject to the size of the area and topography of the region.

The JVC system uses MIMO (Multi In Multi Out) technology that supports four transmit channels and four receive channels. Traditional systems use a two-dimensional signaling space (time and frequency), but MIMO systems add a third dimension – space – to allow transmission of multiple signals over multiple signal paths at the same time and frequency. All streams operate at the same frequency, but each antenna transmits a unique data stream that is recovered at the receiver via sophisticated signal processing.