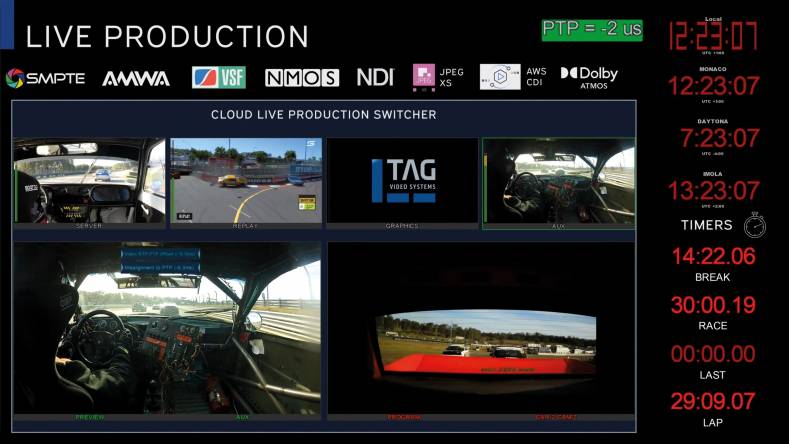 TAG Video Systems has released a series of upgrades, enhancements and added support to its Realtime Media Monitoring Platform fortifying its position as the perfect monitoring solution for live production environments.

The suite of live production tools has been incorporated into the recent version of the Company's MCM (Multichannel Monitoring System) and addresses all aspects of live production including cloud, hybrid and remote operation. The platform was recently selected by FOX Sports as its monitoring and visualization provider at the world’s greatest sporting event in Qatar.

TAG has recently introduced numerous enhancements and has added support for formats and transport protocols to its MCM, including the following:

Comprehensive support added for JPEG-XS transport protocols
TAG set an industry first in 2021 by supporting JPEG-XS to allow live production in the cloud. JPEG XS answers the need for visually lossless quality with extremely low delay – substantial concerns as more broadcasters seek to migrate their live production workflows to the cloud. Now that the format is gaining significant momentum, the Company has broadened support to include all three predominant transport protocols for JPEG XS stream reception and transmission by the MCM: TR-07 for MPEG-2 TS over IP, TR-08 for ST 2110-22, and now CDI for use in the Amazon cloud. Comprehensive support of JPEG XS allows customers to benefit from bandwidth reduction while maintaining an extremely high-quality level, critically important criteria in remote live contribution and production scenarios.

TAG Bridge Technology provides path to bandwidth optimization
In 2022, TAG introduced its Bridge Technology. Bridge Technology provides a super-efficient and economical architecture that enables an operator to receive a source once - including video, audio and metadata, and display it directly on any TAG system, anywhere, for visualization or monitoring regardless of input source, size or format. Once the stream is ingested, the TAG Bridge automatically optimizes the sizing, format and delivery protocol to fit any configuration of multiple recipients removing the complexity of routing the same stream to diverse locations. The economical reuse of redundant signal sources minimizes overall compute resource usage and allows bandwidth optimization in large systems while retaining the quality and low latency required for live applications.

The MCM also now supports LACP (Link Aggregation Control Protocol) which enables the use of multiple links for resiliency and provides load-balancing capability. LACP is a dynamic protocol that can separate a stream and transport it over many different paths to even out bandwidth usage. This load sharing eliminates the threat of overloading a network in a live production environment by automatically detecting high-congestion links and moving content to less trafficked paths.

NMOS – added support for new BCP-002-01 specification
NMOS (Networked Media Open Specifications) is a family of open specifications that enable interoperability between media devices on an IP infrastructure. In addition to supporting NMOS IS-04, which deals with discovery and registration, and NMOS IS-05, which covers device connection management, TAG’s MCM now supports NMOS BCP-002-01. This new specification enables individual audio, video and metadata streams in ST 2110 - originating from different or unrelated sources - to be grouped and assembled automatically on the receiving end. Support for NMOS BCP-002-01, which works in the cloud or on-prem, allows the receiver to define and group elements of a live production, alleviating the time and complexity traditionally associated with assembling diverse sources required for a complete program.

Precision Time Protocol (PTP) statistics visualization
The Precision Time Protocol (PTP) is used to synchronize clocks throughout a computer network with nanosecond accuracy and mandatory for 2110 systems. TAG’s functionality has increased to add visualization of PTP statistics directly on the multiviewer screen. This added capability allows the operator to view PTP data at a glance, providing a heightened level of confidence regarding the health of the system reference clock used for timing in a live production environment where precision timing counts.

Plura Production Timer
The MCM now offers display of the Plura SPT timer family, including the multi-line MTD-ID desk panel display. This feature enables heads-up use of these devices in a live production environment by flexibly enabling their display on the multiviewer mosaic.

UMD, Tally and Timers
The MCM’s rich capability of multi-UMD and Tally display has been expanded with additional visualization features enabling tallying of various aspects of UMD visualization in addition to the usual tally indicators. TAG has also incorporated a native timer functionality enabling use of precision timing elements in UMD / clock displays for any aspect of production timing.