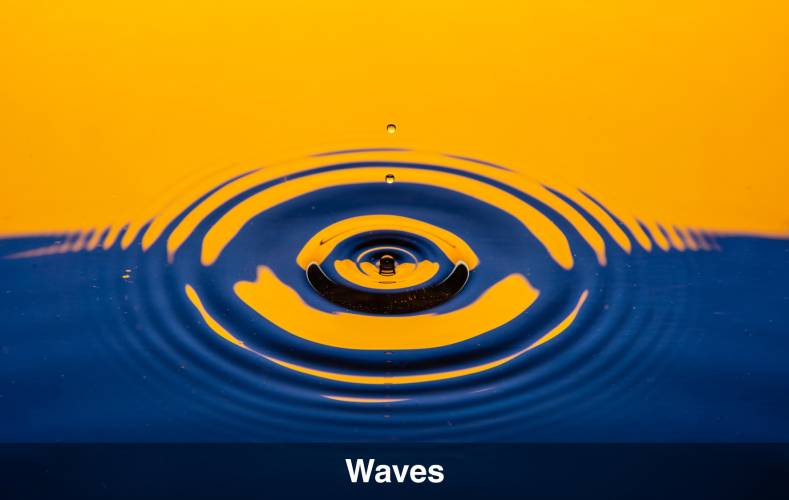 Sound travels in air as longitudinal waves, which result in compressions and rarefactions. These provide the necessary restoring force that tries to return the system to equilibrium. Transverse waves are not possible in air because there is no restoring force following a shearing action. Air consists of myriad molecules that are in ceaseless collision with one another. These collisions are perfectly elastic, meaning that no energy is lost. In a sealed and insulated enclosure, if there is some disturbance to the air inside, such as the generation of a sound, some flow of air or some temperature gradient, the constant elastic collisions will eventually average out the disturbance. Molecules bouncing between moving air and stationary air take energy from the motion. The result is called viscosity. Eventually the molecular motion of the molecules will become uniform throughout the enclosure as all sound, airflow and temperature gradients have been brought to zero.

Although the individual molecular collisions are lossless and reversible, this macroscopic averaging process is irreversible. The earlier forms of energy have all been converted to an increased and uniform temperature. As it is not possible to extract any energy from a system at uniform temperature, heat is the lowest form of energy. The laws of thermodynamics show that all higher forms of energy, potential, kinetic, chemical and so on will eventually end up as heat, hence having radiators on cars and cooling fans on computers.

There are many links between aviation and acoustics and it is as well to be aware of some of them. One might almost define aerodynamics as the very low frequency end of acoustics. In both cases approximations are made in the interests of simplicity. In acoustics, the changes in air pressure due to sound are usually so small compared to the static pressure that the air is essentially linear and the speed of sound hardly changes with frequency. In aerodynamics, the pressure changes induced by many aerodynes (flying objects) are so small that the air can be considered to be incompressible.

Fig.1 - At a) a standing wave can exist between two parallel walls, where a node exists at each wall and a whole number of wavelengths fits between. The standing wave is essentially two sound waves going in opposite directions. At b) the standing wave shown here has two dimensions.

Whenever simplifications are made, it is important to know when they do not apply. In acoustics, the linearity and the constancy of speed both disappear when the sound is extremely loud. The frequencies of sound are such that there is little time during a cycle for any significant flow of heat to take place. This means that any compression of air due to sound must be adiabatic. A reduction in volume raises the temperature, which causes a disproportionate increase in pressure.

The crackling sound that accompanies the lift-off of a space rocket is not the audio system distorting; it's the air becoming non-linear because the pressure variations are so high. The blast from an explosion travels much faster than the speed of sound not just because of the high temperatures reached, but also because the non-linearity of the air makes it appear much stiffer to a high positive pressure. Equally the assumption of incompressibility cannot be upheld when the local airspeed approaches Mach 1.

One of the foundations of wave motion is that whenever a wave meets an obstacle it is the relative size of the wave, the wavelength, and the obstacle that determines what happens. For example the woven wire that is used to cover a microphone is about ten times smaller than the shortest audible sound wave, with the result that sonically it is essentially not there and will have no significant effect on frequency response. Woven materials can, however, produce damping of sound which becomes more effective as the holes become smaller and more numerous.

At low frequencies, loudspeakers are small compared to the wavelengths of sound. This means a drive unit in free air cannot radiate effectively because when the diaphragm moves the air just rushes around the edge from the back to the front and vice versa. A practical loudspeaker needs an enclosure to isolate the two sides of the diaphragm. Inside the enclosure the air acts like a spring operating in parallel with the drive unit's own stiffness. However, the air spring will not be linear because the pressure changes are adiabatic. The loudspeaker linearity can be improved by filling the enclosure with a fibrous material that increases the heat capacity of the enclosure. Pressure changes will then be isothermal and the enclosure will behave as if larger.

Specular reflections are common inside buildings. When sound meets a wall, some of it is transmitted, some is reflected and some is absorbed. In buildings of a reasonable standard, most of the sound is reflected. In a conventional room having parallel walls, it is possible to have standing waves. Fig.1a) shows that one type of standing wave is the result of sound bouncing to and fro between two walls. The standing wave is the sum of two waves going in opposite directions and requires the width of the room to be an integer number of wavelengths. Effectively the group velocity has fallen to zero. At the walls and at wavelength spacing across the room, the particle velocity is zero but the pressure is significant. The frequency at which the standing wave occurs is known as an eigentone. Fig.1b) shows that standing waves can also occur in more than one dimension, perhaps along and across a rectangular room.

A pure tone emitted from a loudspeaker is typically almost impossible to locate because the radiated energy jumps to a standing wave. This does not matter because pure tones carry no information.

Repeated reflections are responsible for reverberation. After many reflections the sound has travelled a long way and air viscosity damps it out. Some energy is lost at each reflection. The result is that a given room has a reverberation time, defined as the time taken after a sound source suddenly ceases for the SPL to fall by 60dB. There is no ideal reverberation time as very much depends on the use to which the room will be put. Orchestral music demands a long RT, opera demands less and speech even less. In multi-purpose halls, the natural RT may be quite short and is extended using artificial reverberation according to requirements.

The human auditory system has evolved features such as the Haas effect and attentional selectivity that makes life possible in reverberant environments. These effects are employed so often that a lack of reverberation is as big a fault as too much.

The presence of strong standing waves makes a room unsuitable for recording or monitoring as the frequency response will be impaired. On the other hand treating a room heavily with acoustic absorbers will make it feel oppressive. The solution is to make the space dimensionally complex so that a small number of strong resonances are replaced by a large number of small ones. The use of non-parallel walls is highly effective, as is the use of diffusers that replace specular reflection with something more like scattering. The Schroder diffuser is a reflecting device that is essentially a randomized diffraction grating. Incident sound is reflected every which way as a function of frequency so that strong standing waves cannot occur. The Schroder diffuser is a two-dimensional device. There is a three dimensional version called a skyline diffuser because the elements of varying height resemble city blocks.