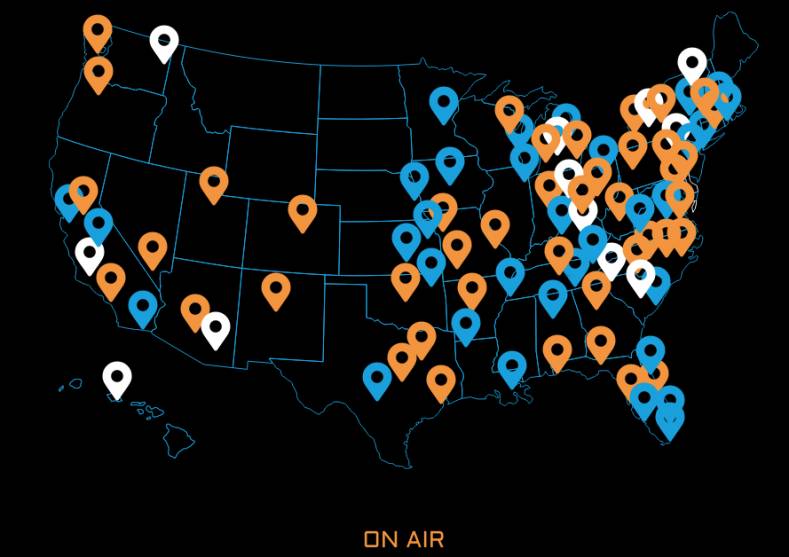 The ATSC estimates NextGen TV signal penetration to reach 75% of the 122.4 million American TV homes by the end of this year.

On the morning of March 9th, Bill Macbeth, Chief Engineer at local Fox affiliate KBSI hit the switch on the station’s Rohde & Schwarz THU9evo liquid-cooled UHF transmitter and, in a video posted on social media, uttered the words: “Transmitter is on, we are making power.” Just like that, they were broadcasting a new NextGen TV (ATSC 3.0) signal over the air to its audience in Southeastern Missouri, Western Kentucky, and Southern Illinois.

A few days later five stations in West Palm Beach, Florida followed suit—Sinclair Broadcasting Group’s WPEC (CBS) and WWHB-CD (Azteca); Hearst’s WPBF (ABC); Scripps’ WPTV (NBC); and Gray Television’s WFLX (Fox)—joining about 300 others (of the approx. 1,300 total) in 62 markets across the U.S., as the industry slowly rolls out the next version of broadcast TV.

The launches keep coming and the Advanced Television Systems Committee (ATSC), the organization responsible for developing the new TV broadcast system, estimates signal penetration to reach 75% of American households by the end of this year.

However, that does not mean they’ll all be watching, as consumers need a new ATSC 3.0-compliant TV to receive the signals. In fact, many in the industry consider NextGen TV a nascent technology that is still not familiar to the general public. While some stations are advertising the Free-to-air service on their OTA channels, the message has not quite resonated yet. For those that don’t want to buy a new TV, they can be assured that the programming of all participating stations will continue to be available in the existing HD format, which can be received on all current digital television sets. 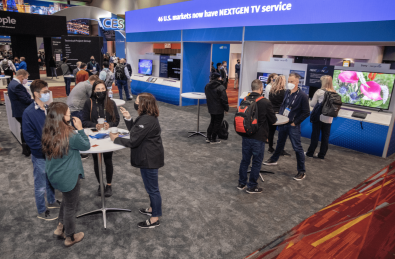 At the CES show in January, several CE companies showed sets with next-generation receivers and the industry expects to ship 4.5 million NextGen TV products to retailers this year.

“The rollout of ATSC 3.0 is not happening fast, and there’s a lot of preparation that needs to happen before a station signals its new transmitter,” said Steven Rossiter, TV Systems Application Engineer at GatesAir. He was referring to transmission lines, towers, RF filtering, antennas and other things related to an OTA service launch. “It’s just replacing a transmitter, so, for each station making the move, that takes time.”

GatesAir has helped numerous stations go live with a NextGen TV signal, including PBS station WHUT-TV (located on the campus of Howard University in Washington DC) in December 2021. GatesAir was the exclusive transmitter supplier for the collaborative lighthouse initiative in the nation’s capital—launched by Pearl TV (a broadcaster business organization) and Howard University—as a prime central location to transmit NEXTGEN TV signals for five local TV stations to that metropolitan area.

The fully-commissioned Maxiva ULXTE-50 liquid-cooled UHF transmitter installed there now carries HD programming and standard-definition sub-channels, and will add multimedia services supported through the ATSC 3.0 standard including emergency alerts, interactive services, and broadband internet access. The company offers an XT exciter, which is fully NextGen TV compliant and helps stations make the transition from ATSC 1.0 to 3.0 with a simple software upgrade.

GatesAir has also been actively involved in NextGen TV rollouts in Detroit, Orlando, Phoenix and Seattle. 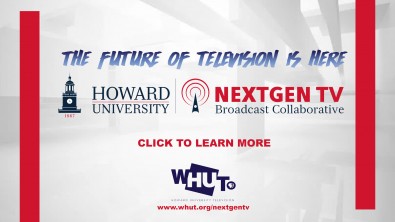 Stations have begun promoting NextGen TV to consumers on their linear and digital channels.

In light of all of these and other OTA service launches, the industry will convene in Las Vegas in April for the 2022 National Association of Broadcasters (NAB) Show—which co-exists with the Broadcast Engineering & IT Conference—to discuss and demonstrate new interactive technologies made possible with the new TV standard.

The conference will also feature a number of technical panels and new products demonstrations.

To this end, visitors to the ATSC exhibit booth will see a “codeless app development platform,” for creating products, content or services for NextGen TV; a new digital pager system used to dispatch first responders, home-based “gateways” for routing content and services around a home; and a newly emerging app that allows consumers to use their cellphones as an alternative back-channel to an OTA interactive broadcast service.

Indeed, as ATSC 3.0 proponents like Sinclair’s VP of Advanced Technology Mark Aitken like to say, this is not simply about broadcast TV, as the IP platform allows many content and service sources to be available to any device.

Aitken has also cited ATSC 3.0’s native support for multiple networking technologies including 5G, 3GPP, Wi-Fi and HC/DVB satellite. “All of these come together to provide for consumers to have a totally new experience,” he said.

What To See At NAB

A must-see panel entitled “What’s Now And What’s Next with NextGen TV”, will be held on April 24 at 10:30 am (room N258-N260). It’s hosted by Anne Schelle, Managing Director of Pearl TV and features a panel of broadcasters—from NBC, Sinclair, NextStar Media Group, and E.W. Scripps—discussing their plans and first-hand experience with the new TV standard.

Other new NextGen TV-related products to be shown on the exhibit floor include GatesAir’s Ascent IP Media Gateway, its Maxiva Liquid- and air-cooled series of 3.0-compliant transmitters.

The GatesAir Maxiva series of transmitters is fully ATSC 3.0 compliant.

Dielectric’s Powerlite antenna series, which features the TFU-WB-LP Series that is built with the unique parameters of NextGen TV in mind by offering a series of elevation gains, azimuth patterns with high front to back ratios, and software tools. This, they say, gives broadcasters maximum flexibility in designing and deploying ATSC 3.0 single-frequency networks.

The Comark Digital Services group will showcase its latest integrated technology and software solutions for ATSC 3.0 deployments. At NAB 2022, the company will showcase a full ATSC 3.0 OTA glass-to-glass demo, utilizing a live, 1080p60 camera feed and then fully processing and transmitting this signal through to an ATSC 3.0 enabled DTV set in the booth (C4409). The demo will also focus on the advance features offered through Advanced Emergency Alert (AEA) capabilities.

Also on exhibit will be Hitachi Kokusai Electric’s Parallax AIO, a simplified and compact version of the company’s UHF liquid-cooled transmitter family that is intended for medium power DTV requirements (5 to 13kW TPO). It incorporates the complete liquid cooling system and RF system (mask filter, output switch, and station RF load) inside the transmitter cabinet in lieu of external subsystems. The benefit of the PARALLAX AIO is that on-site installation time is drastically simplified; the field engineer only needs to connect the transmitter’s RF output to the transmission line and two cooling hoses to the outdoor heat exchanger. It is fully ATSC 3.0 compatible and suited for non-repack replacements or ATSC 3.0 SFN deployments. 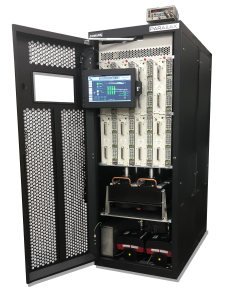 The NAB Show will provide more examples of the new standard and what it can do; perhaps persuading others to make the move. For now, it’s a wait-and-see game. A promising sign from the consumer electronics side: at CES: Hisense, LG Electronics, Samsung, and Sony all showed sets with next-generation receivers and the consumer television industry is poised to ship 4.5 million NextGen TV products to retailers this year.

Therefore, the biggest hurdle for most stations today might be the uncertainty of the ATSC format and where it’s going.

“Everybody knows it’s coming, but no one knows what that timing is going to be,” said GatesAir’s Rossiter. “Is it five years or 15 years before they absolutely have to make the change [to ATSC 3.0]. To date it’s been market driven, with the larger markets moving first. Cost is another issue that has caused some to wait.”

Editor’s Note: ATSC 3.0 is a suite of standards developed by ATSC members as an IP-based system that combines broadband and broadcast, ushering in the next-generation television era, which will offer better pictures and sound, interactive capabilities, advanced emergency information, and more. 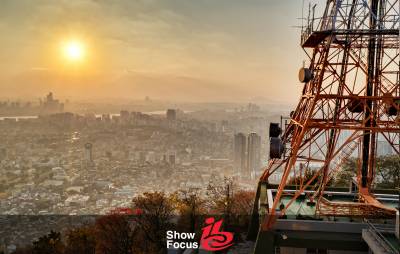 Transmitters & RF At IBC 22 - Technologies To Support Next Generation Broadcast 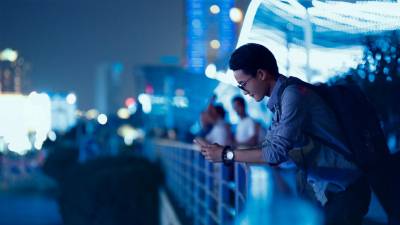