While many stations (and viewers) have grown accustomed to green screen weather walls and rear-projection cubes as part of their sets, LED walls are beginning to show up in greater numbers at production studios around the world. Those old virtual sets are slowly being replaced with new displays on the wall and floor as news organizations realize their immense creative potential.

For evidence of this creativity, just look at the LED technology on display at the recent Opening Ceremonies for the 2022 Winter Olympics in China. In what has been called “the world’s largest LED screen” performers choreographed their moves on top of a 10,552 square meters LED floor made up of 40,000 LED modules to deliver resolutions beyond 8K. A special-effects laser show was also showcased simultaneously, paying tribute to past Winter Olympics by “carving” host cities on a digitally-projected block of ice.

Major TV events like these tend to get studio designer’s heads reeling with new ways to present the news. LED technology is now the favorite for new studio builds. It happened after the 2008 Summer Olympics when China first showcased LED technology publicly during those opening ceremonies and it’s sure to happen again. That’s because live newscasts are becoming more complex using multiple screens in the studio to give presenters more storytelling options.

The technology is ubiquitous within the industry at this point, in all sizes and shapes, with cost being the only hurdle to widespread adoption in TV news.

The Potential For Creativity Is Limitless

“LED technology brings so much potential to add creativity and captivating production values to your newscast,” said Thomas Tang, president of  Apantac. The company makes hardware-based (FPGA) video scalers that power these LED walls and helps scale or crop images depending upon desired screen size.

“I think there are also a lot of advantages to operating these types of video walls, like you don’t have to have a fixed camera and tight synchronization like you do with a virtual set.” Videowalls (and floors!) come in a variety of form factors, from seamless LED video wall solutions to more traditional LCD video wall display solutions. Most are made up of a series of panels that display images from edge to edge, helping to form a large seamless wall. Interestingly, TV studios in Europe tend to install larger LED walls than their American counterparts—mainly due to cost—which typically offer free-standing or wall mounted displays (e.g., CNN’s “Magic Wall”. Fox News’ LumiFLEX LED floor is used as a centerpiece for unique aerial and push and pull shots in front and above the main news desk. The BBC’s Studio C is also an innovative sight to see.

All of these news organizations and others now regularly use large studios outfitted with LED technology everywhere during election cycles and other major news events. That’s because an LED screen in a TV studio also provides maximum flexibility for the production team to change the set look (with images and colors) in minutes for different stories.

A complete LED video wall typically consists of a media server, camera tracking system, and software that helps place the right images on the right screen during a live news production. 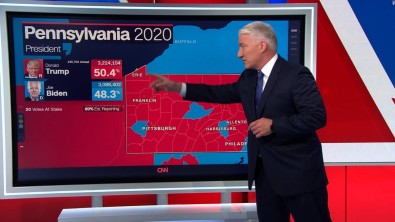 CNN’s “Magic Wall is a free-standing, 81w x 48h inch touchscreen LED screen that allow the presenters to interactive with the images on screen to tell a more comprehensive story.

Using a single interface, content for all screens can be previewed and played-out from the control room or in the studio from various touchscreen devices. Screens can be different resolutions and aspect ratios for creative freedom of studio configurations. Control of individual screens or triggering of content to multiple screens occurs with a single touch or click.

“Our mission is to allow every broadcaster to tell stunning stories with greater creative freedom to achieve the vision for their show and have fun while doing it,” says Gerhard Lang, Chief Technology Officer for the Vizrt Group. “The ability to freely mix live media, video clips, graphics and stills on each screen with fully flexible Viz Artist-defined transitions adds storytelling power and freedom in a way not seen before in standalone screen control systems.”

When designing and installing a videowall, a number of factors must be considered: studio size, lighting (you can use less with an LED screen and they are glare-free), and audio (If the sound quality of the LED display isn’t good, then the voice will bounce in the studio and create unwanted effects like delay). 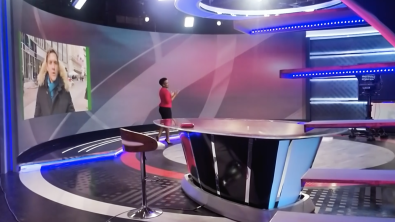 Apantac’s video scalers include technology designed to minimize this latency while software-based technology, while being more flexible, increases this latency. In addition, the company’s KVM over IP products include a videowall processor that allows you to scale and synchronize all of the incoming images on multiple-sized panels. All of the video transmitters and sources remain in the equipment room, while the receivers sit in the news studio. However, sending signals over IP introduces some delay that needs to be addressed.

“In news, audio delay is often not a big problem, but there’s a system-level problem that needs to be addressed,” said Tang. “When you introduce delay, you have to adjust the audio. So, delay is not just a visual problem.”

Designers also need to consider an LED display panel with a good screen pitch, pixel size, brightness, refresh rate and image quality. This is where choosing a professional display versus a consumer one can make all the difference. (That’s not to say that some smaller stations, due to cost, haven’t tried).

To help with this, a company that provides digital display technology called Planar offers an online calculator to help design a videowall for specific spaces.

The LED (Handwriting) Is On The Wall

What’s become clear is that the benefits of an LED videowall in the studio can transform the space in ways virtual technology is not easily, or cost-effectively, able to do. Unlike the rear projectors of old, LED walls generate their own source of light, so the images they present appear crisper and more vivid to the viewer. But there are issues to be mindful of when moving to an LED-intensive set.

“As a TV station, when you switch to new technology, you always have to be careful, because there are jobs and skill sets involved that need to evolve as well,” said Tang. “That being said, implementation of LED displays is easy and the amount of calibration during set up is minimal.”

At the end of the day the viewer is what matters most, so creating a more immersive experience with on-air presenters interacting with the images on screen is sure to entice audiences to come back for more because it’s a better information-retention experience.