Due to the flexibility and virtually unlimited access of the Internet Protocol, manufacturers of broadcast and production equipment have for years provided customers with the remote ability, via an HTML 5 browser interface, to monitor and control hardware devices via a smart phone, tablet or laptop. Vendors have now begun to take that access one step further and have developed dedicated applications for mobile phones—which have been optimized for the reduced scale of a phone screen—that put this control in the palm of your hand.

Grass Valley, for example, offers access to GUIs and video monitors as part of its Agile Media Processing Platform, the interface is not optimized for a 5-inch OLED phone screen. Likewise, the output of TAG Video Systems' multiviewers can be displayed on a cellphone, but it’s not done with an app, it's using an IP address, so most people use iPads to monitor and adjust the bitrate and other parameters of specific channels.

Companies that have made the leap to dedicated phone apps say that it’s helped customers have a better experience with their products and improved workflows when working in the field. Afterall, everyone has a cellphone on them! Blackmagic’s Camera Control app works on cellphones and tablets and is used to remotely turn the camera on or off, change all major settings, adjust and add metadata using a digital slate and trigger recording.

With the app, if a technician in a studio is positioning the camera on the end of a jib or gimbal, they can get full control via Bluetooth from up to 30 feet away. The Blackmagic Camera Control app is based on the open protocol for URSA Mini Pro cameras that was developed by the company.

“Customers are going to have the tools they need to build completely custom remote control solutions of their own design using Bluetooth support.”

Once a camera is paired with the app, users can remotely turn the camera on or off, change all major settings, adjust and add metadata using a digital slate and trigger recording. The Blackmagic Camera Control app has been used by crews working in hard to reach places such as on cranes, drones, and in underwater housings.

Streamlining ENG Workflows Via The Cloud
Sony has a new IOS and Android app for its C3 (Camera-Connect-Cloud) Portal that it calls a “next generation camera to cloud gateway service designed for professional news gathering and file-based production.” With it, users get fast and secure content delivery from the field to any location.

A cellphone with Sony’s C3P mobile app (tethered to the camera via USB) enables full control as well as providing a mobile hotspot in harsh environments.

From the app, news shooters can live stream breaking news to air, the web and social media simultaneously with latency as low as 0.7 seconds. And Sony said its QoS technology ensures high quality video even under challenging bandwidth conditions. Camcorder control and file access features within the app allow a station or production team to remotely monitor and adjust settings of field camcorders during a shoot, then immediately preview, trim and transfer content to begin the editing process. User can also edit files directly in C3 Portal’s CMS, or Adobe Premiere via C3P’s plug-in, or transfer files to Sony’s Ci Media Cloud, or any other public cloud service.

“Today’s consumption habits and workflows demand a real-time component,” said Martin Lindsay, Product Manager, Broadcast and ENG Workflows, Sony Electronics. “Being able to seamlessly capture and broadcast with ease is a game-changer for content creators and news outlets. Immediacy is integral in these environments and having a reliable and secure solution for flexibly controlling, monitoring, capturing, accessing and sharing content helps foster collaboration and get stories to air faster.”

Videographers can also connect to C3 Portal using a Sony camcorder’s built-in WiFi/RJ45 connection or an external LTE device (like a cellphone). This eliminates the need for a backpack transmitter or other transmission hardware. In addition Sony’s new C3 Portal App simplifies set up and connection to C3 Portal and allows the user to access features of the service right from a cell phone.

Sony also offers an XDCAM Pocket app that can be used for live streaming and recording as well as camera control, audio, browsing and transferring. It turns your cellphone into a cloud-ready XDCAM camcorder.

On (Small) Screen Motion Control
A company called Syrp, which was acquired by Vitec Imaging Solutions in 2019, has an app that allows users to control the full range of Syrp products—motion control camera heads, sliders and cable cams—from a mobile device. It offers an easy-to-use interface to increase workflow efficiency on location. 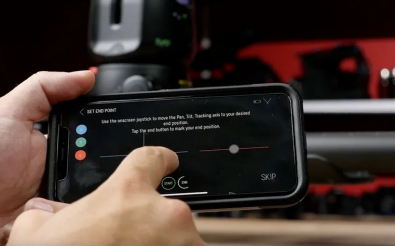 The iOS and Android app minimizes the setup time to create shots on set or in the field. It uses simple on-screen joystick controls to move the carriage along the slider and to also adjust the pan and tilt angle of the Syrp Genie II pan/tilt head. It also allows you to easily go to your start and end points to set keyframes, which you can then adjust with ease.

Users can even place new keyframes in the middle in case they need a more complex camera move. And they can easily switch between video and time-lapse mode to recreate the same movement over a few seconds or a few hours.

The Syrp Genie II app for iOS is available from the Apple App Store and for Android from the Google Play Store. Despite the name, it’s compatible with all of Syrp’s previous model products, too, not just the Genie II.

Better Headphone Performance
The Sennheiser Smart Control App provides sound control and personalization for a full range of headphones and its AMBEO soundbar. The app does not support headphones launched before 2018, with the exception of the PXC 550 Wireless. This free dedicated app for iOS and Android provides an effortless way to control, personalize, update and configure your headphone, headset or soundbar. 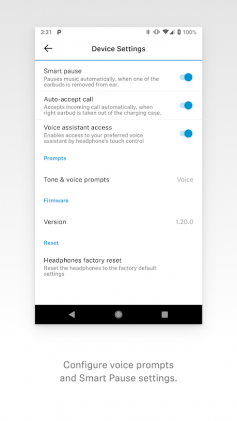 The Sennheiser Smart Control App provides sound control and personalization for a full range of headphones and its AMBEO soundbar.

It provides context sensitive controls to make adjustments relevant to each Sennheiser product and listening situation. There’s an Emotional Equalizer to personalize and enhance the sound, Transparent Hearing modes that are used to configure how you hear ambient sounds or communicate without having to remove the earbuds from your ears, and voice prompts or Smart Pause settings. The app, designed for consumers and professionals, also enables the user to access product information in the user manual and stay up-to-date with the latest software and firmware updates.

Monitoring Battery Charging From Afar
BriteShot, a provider of LED lighting solutions—with regional rental offices in Atlanta, Los Angeles, and New York City—has developed an app for its BritePower modular power system that was developed to maximize battery operation and management by providing instant updates on power levels. This digital tool is available free for both iOS and Android (in the app store as BritePower by CEI). The app also enables users to hot-swap batteries with zero power loss when switching batteries out to charge. The app can also be used to power the batteries on and off for efficient and simple control. The BritePower app helps maximize battery operation and management by providing instant updates on power levels, all in the palm of your hand.

For users deploying the app, there’s no need to hang around by the battery to monitor energy levels, because with built-in Wi-Fi hotspots, the app will send a push notification to the user when its batteries are getting low.

Roy McDonald, co-founder at BriteShot, said that the BritePower app is helping to make customers’ workflows “simpler and more mobile.”

There’s An App For That!
As they have become ubiquitous on set and in the field, mobile phones are paying an ever growing role in production workflows. Going forward more companies will certainly introduce new types of dedicated smartphone applications that help crews create or control devices and systems faster with the touch of a few menu screens. Just make sure you have a strong Internet connection!!