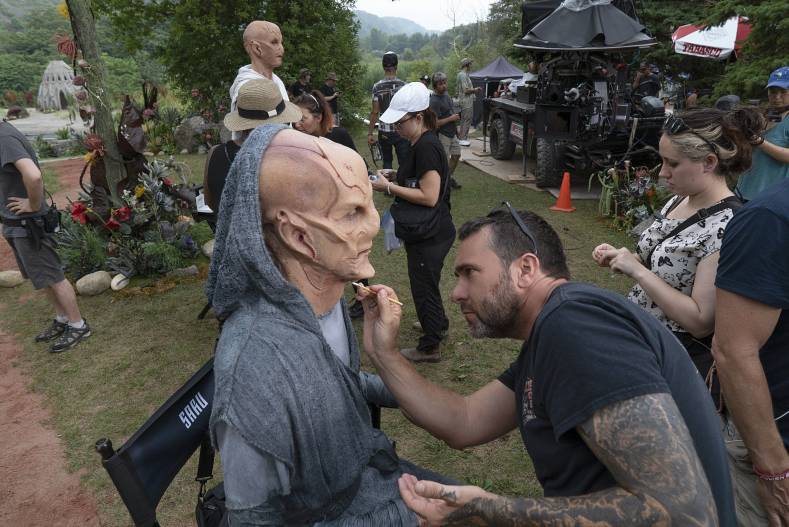 Season 4 of Star Trek: Discovery will bring viewers further into the story than previous seasons, as lead Director of Photography Philip Lanyon adds shooting in full frame to his creative look with Cooke Optics (1.8x) Anamorphic/i Full Frame Plus SF (Special Flare) prime lenses, to supplement the (2x) Anamorphic/i SF lenses that have been used since Season 2. Although each lens range has a different de-squeeze factor, they can be cut together seamlessly.

“I have a history with the Star Trek franchise and the Cooke Anamorphic/i 2x with the Special Flare coating from when I shot an episode of Discovery during Season 2,” said Lanyon. “I then went on to be the lead director of photography for Star Trek: Picard with the Cooke Anamorphic/i Special Flare lenses. I love the Special Flare. They really give me a visual playground in which to convey different emotions through light, colour, and composition, which is perfect for both Picard and Discovery. We are in so many interesting and unique environments, with strong lighting sources that interact organically with the glass. When a ship is near a star, or there are space gases or an alien planet, each present a unique flare that gives the environment an authenticity or feeling of being there. Plus, they give me the control to bring in more flare or take flare away just with a simple lighting change. That adds a lot to the Star Trek universe.”

For the 13 episodes of Star Trek: Discovery Season 4, co-DP’ed with Franco Tata and Chris Mably, Lanyon wanted to shoot in both Super 35 style with the Anamorphic/i 2x SF, and also add full frame format with the Anamorphic/i Full Frame Plus SF. “Full frame has some distinct advantages, along with a cleaner image — it allows me to get closer to the subject with a wider field of view without the distortion of a wide-angle lens,” he said. “That allows viewers to feel more of the relationship between the subject and their environment in a close up — not only who or what they are, but where they are.”

Lanyon was the driving force behind using full frame for Discovery, although the decision to introduce full frame was also somewhat technically driven. “Discovery used virtual production environments in Season 4 and the large format can effectively give you softer backgrounds, which was important to control moiré and other artefacts you can get on a LED wall, but shooting in full frame is what I wanted for the look and feel of Season 4,” he said.

Shot using ARRI ALEXA Mini, Mini LF, and SXT cameras, Lanyon had a large assortment of Cooke lenses. These included three complete sets of the Anamorphic/i 2x SF primes (25mm, 32mm, 40mm, 50mm, 65mm MACRO, 75mm, 100mm, 135mm, 180mm and 300mm) and one set of the Anamorphic/i Full Frame Plus 1.8x SF (40mm, 50mm, 75mm, 100mm and 135mm). The Anamorphic/i Full Frame Plus SF set was dedicated to the virtual production stage for the first 11 episodes, and used as an A camera on the last two. Director Olatunde Osunsanmi wanted to bring more single shot “oners” to the end of the season and the large format feel was perfect for that.