The finite speed of light, and indeed of all communication has various impacts on broadcasting.

Electromagnetic waves move pretty fast; so fast that for everyday purposes we treat light as practically instant. However, once we involve modern electronic equipment, which can also run pretty fast, then the finite speed of light has to be taken into account.

As the processing speed of computers rose, the finite speed of signal propagation between different parts of the machine became significant. The supercomputers designed by Seymour Cray were built in the shape of a horseshoe, so the circuit boards radiated from the backplane, which could then be shorter and faster.

The finite speed of light affects broadcasting in various ways. The propagation time delay itself is rarely an issue. In analog broadcasting, one of the problems encountered is multi-path reception, in which the receiver finds signals in addition to the direct, or line-of sight, signal that have reflected from something and arrived via a different route. Such signals have always travelled a greater distance and so will not be synchronous with the direct signal.

In analog television, a reflection would cause a pale replica, or ghost, of the image to be superimposed on the true picture, but shifted right by the amount of the delay. Such things are just memories today.

Matters become worse if buildings or terrain obstruct the line-of-sight path because the direct and reflected signals may then be received with equal power. The traditional approach to multi-path reception was to use a directional antenna. Fig.1 shows that a better result might be obtained directing one of the antenna nulls at a reflection rather than trying to maximize the line-of-sight signal.

Such an approach only works if the receiver is fixed and if the cause of the reflection is fixed. Fig.2 shows the effect of living near an airport. Reflections from the aircraft can be as strong as the direct signal. As the aircraft moves the two received signals alternately arrive in and out of phase, leading to periodic replacement of the sound by noise on an FM radio.

When sound or pictures are digitized, a trade-off takes place, because the signal to noise ratio needed to distinguish a one from a zero is very small, whereas a high bit rate is needed. That high bit rate means the time allocated to each bit is very short. Whilst that is not a problem on storage media, only the slightest amount of multi-path reception would shift the reflection by more than one bit and completely trash the message. Thus conventional modulation techniques could not be used and digital broadcasting only became possible when new approaches were developed. 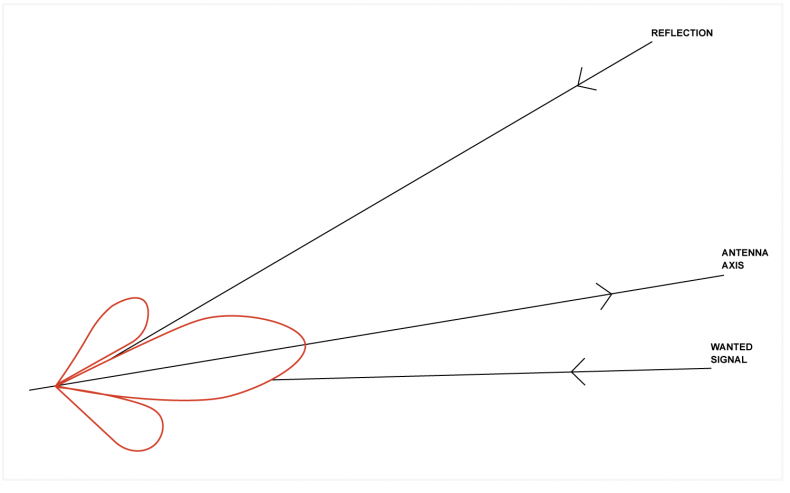 Fig.1 - Aiming an antenna null at the reflection may improve reception even if the received signal is smaller.

Transmissions from satellites suffer very little from multi-path propagation, as there is not much up there to reflect the signal and the dish used at the receiver is directional. Unsurprisingly modulation schemes for terrestrial and satellite communication have developed along different lines.

Everyone knows that traditional radar works by transmitting signals and timing the reflections from, say, an airplane. The constant speed of light allows the range to be measured accurately. Stealth airplanes are designed in such a way that radio signals are not returned whence they came. Stealth technology was discovered accidentally around 1948 when it was found that US military radar could not track Jack Northrop's YB-49 airplane. That was because the YB-49 was a flying wing and simply lacked most of the parts of a conventional airplane that would return radio energy to the transmitter.

After a few decades had elapsed, stealth airplanes emerged when fly-by-wire technology was sufficiently advanced. The shapes optimized for low radar signatures were aerodynamically unstable and the airplanes had to be artificially stabilized at all times.

When radio energy hits a stealth airplane, some of it is absorbed and most of the rest is reflected anywhere except back to the transmitter. The oblique angles made by most of the surfaces direct energy away from the conventional radar set. Despite their name, stealth aircraft can be detected using passive radar, which does not itself emit any signals. Instead passive radar is looking for disturbances in existing transmissions.

One way of defeating multi-path transmission is to use highly directional transmitters and receivers that are carefully aligned with one another. This approach is used in microwave communications where fixed parabolic dishes that are much larger than the wavelengths employed exchange very narrow beams between one another.

Fig.2 - A strong reflection from an airplane results in comb filtering of the received signal that changes as the plane moves.

By definition, broadcasting consists of radiating signals in such a way that a large proportion of the intended population could receive them. Traditionally a frequency band would be dedicated to a particular service, and within that band transmitters would occupy narrower channels with their radiation. As there would seldom be enough channels, the design of a service would have to consider the re-use of channels in transmitters that were far enough apart.

The finite speed of light also affects synchronization. Fig. 3a) shows an example in which signals from two radio transmitters are intended to arrive synchronously at a given place. If both transmitters are provided with the same frequency reference, the timing of one of them can be adjusted until the signals arrive at the receiver at the same time. The receiver can add the signals for better reception.

Fig.3 - a) Signals arranged to arrive in-phase at a receiver will augment one another. b) At another location, the phase coherence fails.

The solution that has been widely adopted for digital broadcasting is to use modulation schemes such as OFDM that divide the bit rate into a large number of narrow channels so that the rate in each channel comes down and the symbols get longer. Symbols might use a modulation scheme such as QUAM (quadrature amplitude modulation) in which each symbol carries one out of 16 or 32 combinations of amplitude and phase that allow 4 or 5 bits to be carried.

Another consequence of the impulse response model is that energy from a given symbol can arrive in the next symbol to cause inter-symbol interference. This can be avoided by the introduction of guard intervals. A guard interval consists of a period of time, typically a quarter of the symbol period, inserted at the transmitter between symbols, during which the signal is effectively gated out at the receiver so any hangover from the previous signal has time to decay.

The use of OFDM and guard intervals allows more than one transmitter to transmit the same signal even though a receiver may see several transmissions. Effectively if the transmitters are synchronized accurately and radiate identical signals, the receiver cannot tell the difference between a reflection from a single transmitter and a signal from a second transmitter. This means that it is possible to have a single frequency network maintained over a large area by a number of transmitters. This allows significantly better spectrum efficiency than any analog solution. In theory a mobile receiver could move around the coverage area without re-tuning.

The impulse response approach can also be used to model the characteristics of optical fibers. These fibers work using total internal reflection so that light fed in at one end can travel a considerable distance. In an early type of optical fiber, the number of reflections varied, and with it the angle of the light rays and the distance travelled, producing a broad impulse response. The mechanism is essentially that of multi-path radio, but the term used is modal dispersion.

Subsequently the optical fiber was made in such a way that the refractive index changed from the center to the outside. This had the effect of steering the light so it travelled straight up the center of the fiber. This so-called single-mode fiber had a much shorter impulse response, or reduced modal dispersion, and so offered greater bandwidth.

The bandwidth of a modern optical fiber is so enormous that it is difficult to grasp and depends more on the capabilities of the transmitting and receiving equipment than the fiber itself. The optical fiber can carry a whole spectrum, just like radio, so more than one wavelength can be carried simultaneously.

The latency of the fiber itself is very nearly the distance divided by c. This will typically be less than the latency of a satellite link, since the latter involves greater distances sending the signal up to the satellite and down again. In practice latency will be increased by the need to use error correction.