There are not exactly 365 days in a year; almost 365 and a quarter. As a result it is necessary to have an extra day every fourth year, known as a leap year, to keep the calendar roughly in step with the seasons. It's analogous to drop-frame time code. Even that isn't accurate enough and the solution is that once a century a leap year may be omitted.

The Julian or Roman calendar wrongly assumed exactly 365.25 days in a year, so after a few centuries it was quite a long way adrift from the seasons. The necessary correction when the Gregorian calendar was adopted caused a big jump in the date. Not all countries adopted the Gregorian calendar at once, with the result that the October Revolution in Russia was in November in England and the USA. The correction caused a jump in the calendar that omitted eleven days. The ill educated were unhappy because they thought their lives had been shortened.

Talking of October and November, those names look a lot like the Italian for eight and nine, otto, where an octave comes from, and nove. Come to think about it, doesn’t September sound like sette, the Italian for seven? How about December; which sounds a bit like decimal?

Once upon a time there were ten months in the Roman year, and the last four were named after their numbers. Then some comedian had the bright idea of adding a couple of months in the middle of the year named after Roman emperors, so the seventh, eighth, ninth and tenth months became the ninth, tenth eleventh and twelfth months. 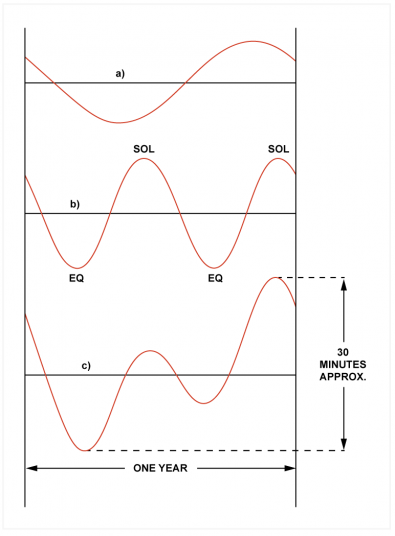 As clocks became more accurate, it became clear that the time when the sun was highest in the sky, known as the culmination, was subject to considerable variation, making the sundial and the clock differ in a pattern that repeated annually. The peak-to-peak variation in the sun’s timing compared to a constant-rate clock is about half an hour.

This was measured and recorded before it was understood. Before radio, before telegraphy, before rock and roll, the equation of time, linking local solar time with mean time, would allow a clock running at constant speed to be set from a sundial. It is called the equation of time in the sense that it allows the two forms of timekeeping to be equated, not because it was a mathematical expression. It would be some time before the effect was modeled.

Reading a sundial would give local solar time, and applying the equation of time for the appropriate date to would give the time a clock should read, so the clock could be corrected. A clock adjusted in that way is running at local solar mean time, which means that every longitude has its own local time zone. Two places fifteen degrees of longitude apart would have their local time one hour apart.

Navigators had tables showing the way the elevation of the sun at midday changed throughout the year, so finding latitude from the sun wasn’t difficult. The problem was finding longitude. In theory it could be done if a navigator carried an accurate clock synchronized to GMT that could be compared to local solar time. The practical problem was that the most accurate clocks were all based on the timing of a pendulum that could not survive the rolling of a ship.

John Harrison of grid-iron pendulum fame once again came to the rescue with a peculiar clock having a dual mechanism where the two parts worked in anti-phase. Extracting the common mode of the two movements allowed it to keep time even on a moving ship and allowed a new level of precision in navigation.

The meter had been defined as a ten millionth of the distance from the equator to the North Pole. The Metric system also adopted a unit of angle called the gradian, and there were 100 of these in a right angle. One centigrad (a hundredth of a gradian) of arc on the Earth’s surface would correspond to one kilometer, as shown in Fig.3.

Unfortunately 400 gradians in a circle doesn’t subdivide as well as 360 degrees, so the latter system won out. The degrees were subdivided into 60 minutes. One minute of arc then corresponded to a nautical mile and the rate of one nautical mile per hour is called a knot. At the equator the circumference of the Earth is about 360 x 60 = 21600 nautical miles and the Earth’s surface is travelling at about 21600/24 = 900knots! An error of one second in the accuracy of a navigator’s clock would cause a longitude error of a quarter of a nautical mile.

When communications were poor and travel was slow, it didn’t matter that every village had its own time zone, but with the development of the railways a timetable would be meaningless without a common reference. That led to the development of railway time, which was first introduced on the Great Western Railway in the UK in 1840. Telegraph wires alongside the tracks allowed time signals to be sent so that clocks across the whole railway network could be synchronized. Eventually every railway in the United Kingdom was running on Greenwich Mean Time and later it was adopted as the national time reference.

In the United States there were a number of accidents where two trains each thought they had the right to use the track but they were using different time references. Railway time subsequently spread across the USA, but the sheer width of the country meant that a single time zone as in the UK was not possible.

Using a time zone one hour wide did not differ too much from using local mean solar time, it just mean that the sun set a bit sooner on the east side and a bit later on the west side. The world eventually adopted time zones one hour apart, with one exception, which is Newfoundland that to this day has a half-hour difference to the time used by its neighbors.

In the early days of broadcasting, the multiple time zones in the USA meant that nationally famous entertainers had to perform several times in order to be on the radio at the same time in each time zone. A certain Bing Crosby was getting fed up of this when he came across a tape recorder that Jack Mullin had brought back from Germany at the end of WWII. The Telefunken recorder had excellent sound quality thanks to the incorporation of ac bias. 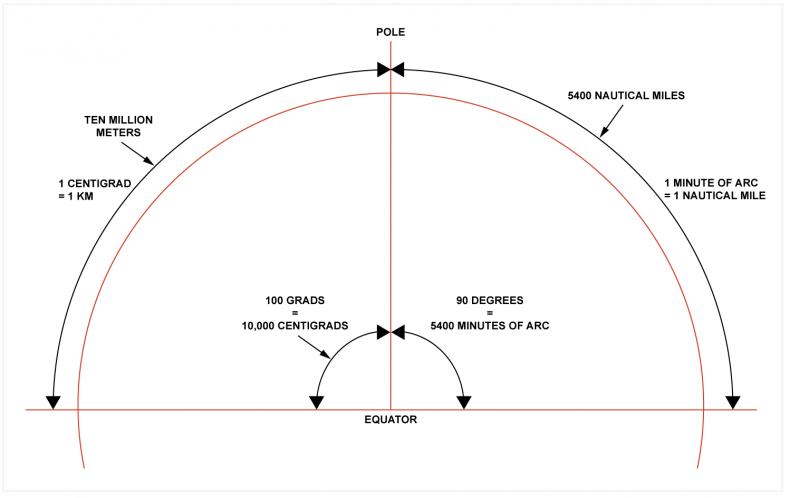 Fig.3 - On the left, the quadrant of the earth from equator to pole was defined as ten million meters. The intention was to divide it into 100 grads, each of which was one hundred centigrads, corresponding to a distance of 1km. The idea wasn’t popular and instead the quadrant on the right was divided into 90 degrees, each of which contained 60 seconds of arc. One arc-second corresponds to a nautical mile, which became the standard navigational unit.

Crosby figured that with a good audio tape recorder he would only need to perform once and the tapes could be played for the later time zones. All he needed was for someone to make some of these machines for him. A Russian émigré by the name of Poniatoff had been making electric motors during the war and knew a bit about magnetics, so he got the job of replicating Mullins’ Telefunken.

Alexander M Poniatoff found that his initials were already in use by an American manufacturer, so he added “EX” on the end to stand for excellence. Thus the name Ampex was born. Subsequently Crosby said to Poniatoff that if he could record audio, why couldn’t he also record video. Crosby didn’t know that the video recording was several orders of magnitude harder than audio. He just wanted a solution, provided the money and told Poniatoff to get on with it.

One of the difficulties they found was dealing with noise in the system. A member of the team, by the name of Ray Dolby, made a career out of noise reduction.

Poniatoff thought he would sell a handful of his video recorders. Not long afterwards a certain William Lyons reckoned he would sell a few hundred E-Type Jaguars. How wrong they both were!