Somewhat over a century ago, the state of scientific knowledge was such that both magnetic fields and electric charges were reasonably well understood and described by the Laws of Faraday and Ampere. Simple electrical machines using the ideas had been made. However, at that time it was not known what light was; just that it had some wave-like behavior.

James Clerk Maxwell took the existing knowledge of electricity and magnetism and found that the equations predicted that waves could exist that contained elements of both. When he tried to work out the speed at which the waves would travel, he found the equations predicted a speed that was already known as the speed of light, c, which is about 186,000 miles per second or 3 x 108 meters per second. A useful rule of thumb is that light travels roughly one foot in a nanosecond. Incidentally the symbol c is used because celeritas is Latin for speed.

Instead of being something different, suddenly it was realized that light is an electromagnetic phenomenon. It was further realized that the visible light that humans have evolved to see is a tiny part of a much greater spectrum that included radiant heat and X-rays. Discovery of that greater spectrum led to its subsequent use for radio and television transmissions, amongst a myriad other uses from opening garage doors to defrosting chickens.

As water and sound waves only propagated in a medium, it was at first though that some medium would be necessary for the propagation of electromagnetic waves, and a mysterious material known as the aether was invented to serve that purpose. However, it was subsequently shown that Maxwell’s equations did not require any medium for propagation and indeed that there was no aether.

One key finding was the outcome of the Michelson-Morley experiment performed in 1887. If there is an aether, the Earth must move with respect to it. A point on the equator is moving at about 1000mph because of the Earth’s rotation, with the direction constantly changing throughout the day. Further motion takes place because the Earth orbits the sun. Perhaps the sun also moved through the aether.

The Michelson-Morley experiment sent light in long paths at right angles to one another, so any directional effects would be seen. But no effects were ever noted. If the apparatus was rotated on its mercury bearing, or if the Earth was allowed to turn and orbit of its own accord, no effect was ever measured.

The Michelson-Morley experiment is often described as an experiment that failed. From a scientific standpoint a carefully designed experiment never fails; it simply shows how nature operates. If the outcome is not what was predicted, which was certainly the case here, it simply shows that the predictions were wrong and that nature did not operate as was thought.

In fact the Michelson-Morley experiment was pivotal, because it introduced a whole new way of thinking about nature and led directly to modern concepts such as relativity. Relativity came up with some remarkable ideas, many of which are not intuitive, but which have been found to be correct by experiment.

One of the predictions of relativity is that it is not possible for anything to exceed the speed of light. Any matter that travels at high speed will increase in mass and as the speed approaches that of light the mass will become infinite, which means that infinite energy is needed to make it go faster. You don’t need anything as fancy as a cyclotron to demonstrate the effect. The electrons in an old fashioned CRT are going fast enough to increase in mass and need stronger deflection forces than if they retained their rest mass.

Light holds a place of honor within the rules of relativity because it travels at the speed of light. The reason it can do so is that unlike matter, light has no rest mass. Light is a form of energy and the equivalence of energy and mass according to relativity allow light to have finite momentum. A direct consequence of this characteristic is that light cannot rest. Light must keep going until it is absorbed by some impact.

The constancy of the speed of light leads it to be used as a metric for the huge distances encountered in astronomy. The light year is the distance traveled by light in one year. For comparison, it takes light from the sun about eight minutes to reach the Earth. If one visualizes a second Earth in the same orbit, but on the opposite side of the sun, messages from one Earth to the other and back would take half an hour.

Scale this up to another planet a mere 40 light years away, and if there was a communication channel, despite fantastic problems with noise and directivity, we could not expect a reply for 80 years, making a meaningful conversation a tad difficult. When it is considered that any solar systems that might have planets capable of supporting life are much further away than that, the search for extra terrestrial intelligence seems to be a futile undertaking.

Whilst statistically speaking the existence of other planets on which there is life is not impossible, that isn’t the problem. The problem is that the finite speed of light prevents any meaningful communication. It also makes it tough to be an omniscient and omnipotent deity. 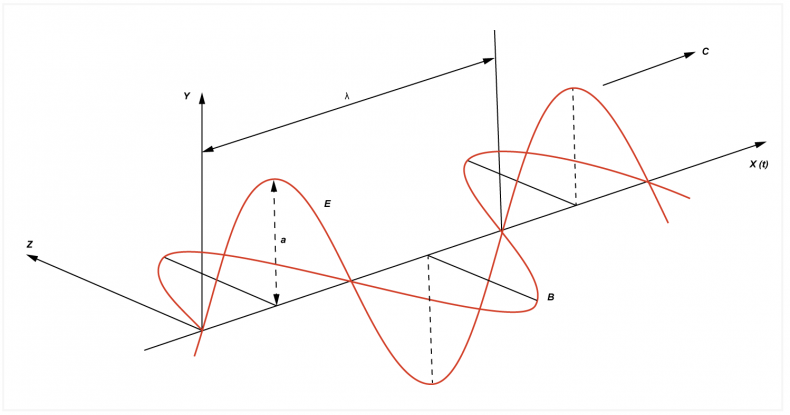 Fig.1 - Light is shown here propagating along the x axis at speed c, whereas the magnetic component B oscillates in the z axis and the electric component E oscillates in the y axis. Note the two components are precisely in phase and the wavelength is the length of a complete cycle of positive and negative excursions.

Maxwell thought there was a medium called the aether in which electromagnetic changes propagated, so he didn’t struggle to understand how light could travel through a vacuum. However, he did struggle to understand how current could flow through a capacitor. At the time, the best prediction of current flow came from Ampere’s Law that showed how there was a magnetic field generated along the entire length of a current carrying circuit. This remained true even if there was a capacitor in the circuit, through which no current could flow because of the insulation between the plates.

Based entirely on intuition and arguing philosophically that there must be symmetry in nature between electricity and magnetism, Maxwell said that the rapidly changing electric field in the capacitor must give rise to the observed magnetic field. The effect of the changing electric field had units of current, so he called the effect displacement current. Displacement current acts like a conventional current, but it does not involve the flow of electrons.

Maxwell managed to refine Ampere’s equation and make it correct. Having found the symmetry that he argued for actually existed, he was able to explain electromagnetic radiation, which is only possible because of that symmetry.

As the wave moves at the speed of light, it is spatially varying and appears time-varying as it passes and can generate a time varying electric field. A time varying electric field generates a displacement current that results in a magnetic field. Fig. 1 shows that an electromagnetic wave (shown here in one state of polarization for simplicity) consists of an electric component and a magnetic component that must be in a plane at 90 degrees to the plane of the electric component. The two components carry equal energy and must always be in phase because they depend on one another.

We now have a second reason why an electromagnetic wave cannot stop, because if it did the time variance would stop and the propagation mechanism would fail. We can also see why propagation is possible in the vacuum of space. Magnetic fields can travel through a vacuum and displacement current is also possible in a vacuum, because even a vacuum has permittivity, which allows energy to be stored.

Displacement current is an incorrect term and Maxwell used it because he thought the aether was being distorted by the changing electric field. Maxwell was working at the leading edge of what was known and his equations turned out to be right, even if his ideas of the underlying mechanisms were slightly out.

The constancy of the speed of light follows from Maxwell’s equations. The findings of the Michelson-Morley experiment threw another cat amongst the scientific pigeons, because those findings meant that there cannot be any such place as an origin in the universe against which motion or distance can be measured.

These paradoxical effects would be explained by relativity. Interestingly, it turned out that Newton’s Laws of motion had to be modified when high velocities were involved, whereas Maxwell’s equations needed no change at all.