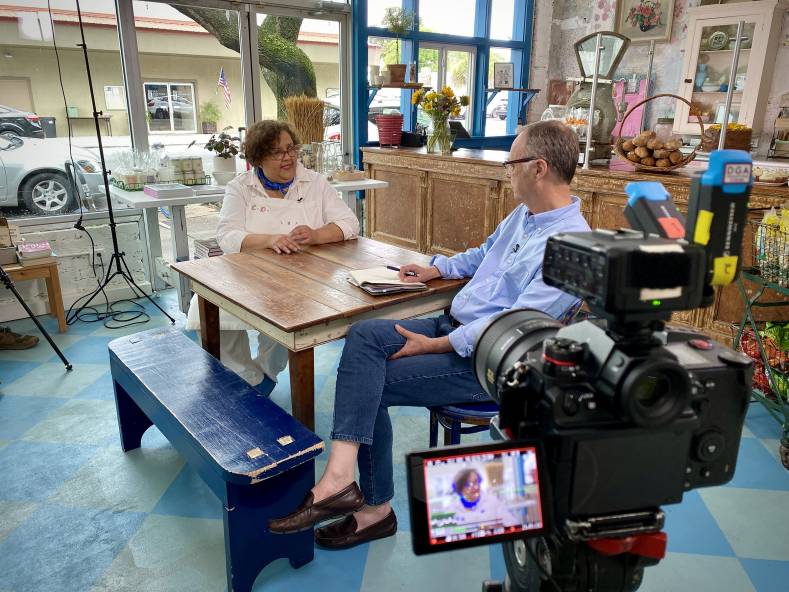 Part of the show is shot out in the field where the team shoots in a documentary style.

The show is produced by Milk Street and directed, photographed, and edited by DGA Productions, which provides full crew, equipment, and post-production for the series. The show is shot with a multitude of cameras, including Panasonic Lumix S1, S1H, GH5, and BGH1.

Part of the show is shot out in the field where the team shoots in a documentary style to capture as much footage as possible, giving the editors more material to work with. For location shooting, they use S1H, S1 and GH5 cameras.

DGA Productions Director and Director of Photography Jan Maliszewski has won 3 daytime Emmy’s for directing Milk Street and considers the Lumix critical tools for the show.

Shooting on the road, the team is usually just Maliszewski and camera operator and Emmy-nominated editor, Michael Andrus. For a recent shoot in LA, they used two S1Hs and an S1, which they used mainly for time lapse.

“What we'll typically do, even if it's two people on camera, we’ll set the S1H up on a tripod to shoot 4K a little wider so our editors can punch in,” explained Maliszewski. “And then Michael and I operate the close up and the guest camera from the side. Those shots are usually handheld, or we'll use a monopod. This approach allows us to be nimble while capturing beautiful images.”

Since they don’t have a 4K delivery requirement, Maliszewski and Andrus usually record FHD (1920 x 1080) V-Log files at 23.98-fps in 200-Mbps ALL-I, but will sometimes shoot in 4K to capture a larger canvas for post. Regarding lenses, Maliszewski uses several L-mount lenses for his S1H and S1. He also uses several Canon EF mount lenses with the Sigma MC-21 L-mount adapter.

For the studio portion of the show, the team uses a Sony Venice and FX9 for their primary cameras. According to Maliszewski, a lot of the Lumix gear they’re using in the field is now being incorporated into the studio. For previous seasons, they used a jib but due to COVID, they’re employing less crew members in the studio. Instead of a jib, they employ a BGH1 as their overhead camera and use the LUMIX Tether for Multicam app to control it. On the BGH1, Maliszewski uses a Lumix 12-35mm f/2.8 lens, as well as a 42” Rhino Slider and ARC II Head for left to right camera moves. He also likes that the BGH1 has a stable SDI out, which gives him more confidence that he is getting the shot he needs.

Maliszewski; “We shoot in 4K and because we're delivering in 1080, post can punch into 1/4 of the frame and can create little corkscrew moves.”

The team also use two S1Hs and a GH5 with macro lenses for studio work. Since they have more resources and space for lighting, they make use of Litepanels Gemini LED panels for higher output. Since there are large windows in the studio, for light control they use hard ND gel that they put in front of the windows, usually an ND3 or ND9.

“We mainly use those hard gels, in conjunction with the LED lights in the studio,” explained Maliszewski. “The two basic modes is a high key, bright light outside from the street and our dimmable lights. And then as the day begins to fade and the clouds roll in, we’ll pull some of the gel.”