Random wave action across a lake was a good challenge for a NDI compression evaluation.

We began producing and televising live offshore races in 2007 using the 220 MHz band ham radio gear for RF backhaul of NTSC cameras across the beach and water for a local cable channel broadcast for charity. A couple of years later our race coverage moved to live broadcast on a KRBK TV Springfield MO digital subchannel. KRBK didn't have room for a second HDTV signal and NTSC fit right in.

We switched to HD production in 2012 and used an uplink to distribute the show in HD to stations on our network so they could broadcast us in HD. We also moved to renting bonded cellular systems from LiveU, Dejero and TVU Networks for field camera backhauls because dedicated BAS HDTV microwave systems were too expensive.

The painful, two second cellular data latency in those days required all field cameras to go through bonded cellular systems to be in sync at the production switcher. Critical, synchronized camera angles of 150 MPH racers were maintained, but the latency made the show difficult to direct.

Field camera operators were 2 seconds ahead of the studio. I would request “Camera 1, pan right,” and Cam 1 would reply “I already did,” just as Cam 1 panned right on the control room monitors. We had no tally lights. Camera operators had to assume they were always on. It was awkward for everyone behind the scenes.

The Matrox and Ubiquiti gear resolved the latency issues and continues working well, but we wanted to look at new solutions, and try the internet for camera backhaul. A NewTek Spark Plus 4K cost about 90% less than what we paid for a Maevex encoder and decoder pair and it seemed worth a try. We own a TriCaster Mini and bought a Spark Plus 4K.

Four models of Spark Plus are available. Spark Plus 4K was the least expensive model that only converts HDMI to NDI. It was a test and it fit our budget. The other models also provide handy conversion from NDI to HDMI, or SDI, or 12G-SDI. Spark Plus 4K uses NDI software.

My original story idea was to write about replacing our older Matrox encoders and decoders with Spark Plus for both internet and Ubiquiti Wi-Fi backhaul to bring the remote cameras into the TriCaster Mini without using HDMI inputs. It seemed like it could be a win-win.

1080i bars and tone produced a 26.87 Mbps Bitrate at the Spark UI, and indicated 28.1 Mbps Ethernet activity in Task Manager.

When the Spark Plus output is directly plugged into the ATT Gateway Router, the 1080i output of the Panasonic camera produced a smooth and faithful NDI video stream using approximately 114-125 Mbps of bandwidth. When the Spark UI indicated 115 Mbps Bitrate, the computer running NDI 5 Studio Monitor Task Manager indicated its Ethernet connection is receiving 120 Mbps.

Things changed considerably when the Ubiquiti Wi-Fi was integrated. With full-motion 1080i, the best bitrate from the Spark was 6 Mbps, which was a couple of jerky frames per second. I contacted NDI Tech Support who told me the problem was because the Ubiquitis were 10/100 Ethernet connections. There were no other speeds between the unusable 6 Mbps and full 115 Mbps. According to NewTek, “a single stream of HD video can easily be delivered on a Fast Ethernet (100 Mbps) network, but Gigabit (1000 Mbps) networks are essential in production workflows,” but the Ubiquitis and Spark Plus did not play well together. 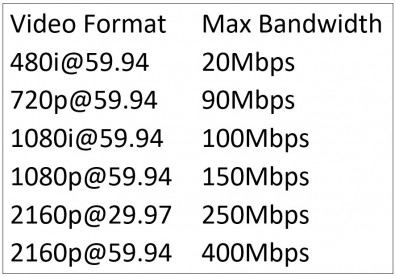 As Figure 1 shows below, a typical NDI stream consisting of 1080i HD video yields a data rate up to 100 Mbps per stream. This extremely efficient stream is designed to have very low latency and allows multiple streams to be stacked together on a single Gigabit network.

No Generation Loss
NDI is the first ever codec to provide multi-generational stability. This means that once a video signal is compressed, there is no further loss. As a practical example, generation 2 and generation 1000 of a decode-to-encode sequence would be identical. The peak signal-to-noise ratio of the NDI codec exceeds 70dB for typical video content.

NDI compression is designed to enable transmission of a large number of video streams across existing infrastructure, specifically discrete cosine transform (DCT), which converts video signals into elementary frequency components. This method of compression is commonly used in encoding formats and mezzanine codecs within the industry.

NDI operates most efficiently in a dedicated network with high bandwidth and high availability. This is in contrast to unmanaged environments such as the public Internet or networks where video rides along with data without priority. NewTek says “NDI achieves significantly better compression than the majority of codecs that have been accepted for professional broadcast use. On a typical, modern Intel-based i7 processor, the codec is able to compress a 1920x1080 video signal at 250 frames per second using a single core.”

Hand-Written
The NDI codec is designed to run very fast and is largely implemented in hand-written assembly to ensure that the process of compressing video frames occurs as quickly as possible. Latency is both a factor of the network connection and the endpoint products. NDI has a technical latency of 16 video scan lines, although in practice, most implementations would be one field of latency. Hardware implementations can provide full end-to-end latency of within 8 scan lines. NewTek has not revealed its speed across the internet.

The most convenient feature of NDI is that NDI sources on the LAN automatically appear as network sources on a TriCaster. Another convenient feature is that the free NDI 5 Studio Monitor software on a i7 PC can decode NDI to HDMI for input into a HDMI device, as can I/O models of Spark Plus standing alone that cost much less than a new i7 system. 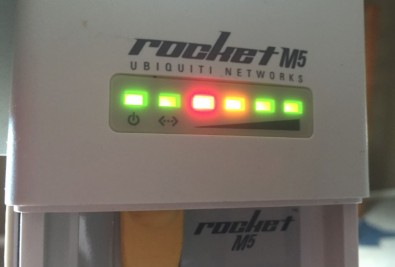 The Ubiquiti Rocket M5 had a strong signal but failed the NDI test.

Compared To h.264?
I wouldn’t call NDI a bandwidth hog, but it can't be compared to h.264 or h.265, because it wasn’t designed to compete with either one. I’m used to the control Matrox Maevex h.264 provides. It allows manual bandwidth selection from 5Mb to 25 Mb. HDTV quality seems to max out at 15-20 Mbps and it works well with Ubiquiti Wi-Fi radios. NDI bandwidth is automatic.

Ubiquiti recently introduced two, U6-series Wi-Fi 6 radios that advertise a GbE Ethernet port and speeds up to 1300 Mbps. One even uses OFDMA modulation for better bandwidth, similar to ATSC 3.0. The first U6 models are indoor units with a range of about 600 feet. I would expect newer outdoor U6 units with external high-gain antennas and more range may be introduced soon. The primary use today is in high density areas of digital device users such as stadiums, hotels and hospitals. They are designed more for many simultaneous users than one user.

One significant problem with using a 160 Mbps Wi-Fi channel in the 5 GHz Wi-Fi band is that it uses a large slice of the band. Ubiquiti limits sales of Wi-Fi 6 radios to 2 per customer, apparently due to its potential bandwidth footprint.

NDI Is Free
Nearly three months after its initial rollout, parts of NDI 5 continue in beta. For example, the start buttons on NDI 5 Bridge for ‘Host’ and ‘Join’ modes say “Coming Soon.” Those modes of Bridge are what will allow Spark Plus to communicate over the internet, for video production and video meetings. Right now, NDI 5 only works on GbE or better LANs. We can’t test the Spark Plus over the internet without ‘Host’ or ‘Join’ modes.

The problem with free software and free upgrades is that users don’t pay for it and have little leverage. Clearly, NDI is a work in progress worth waiting for and growing with.