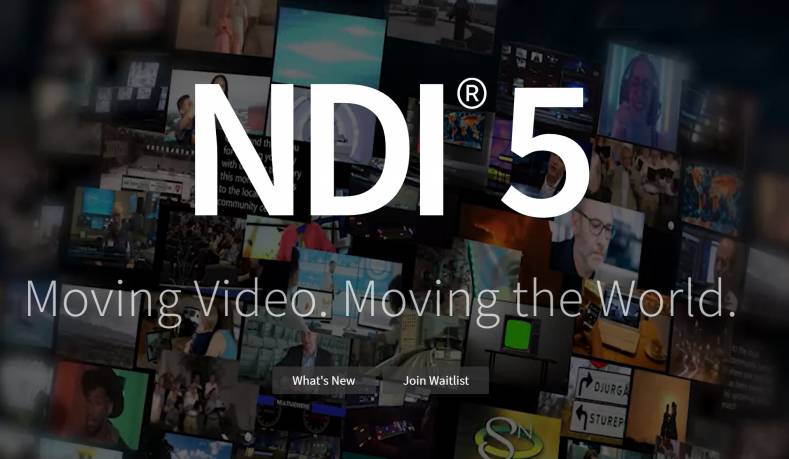 Systems integrator Keycode Media recently streamed a live interview about the release of NDI 5 with NDI founder and President of Global Research and Development at NewTek and Vizrt, Dr. Andrew Cross. This story is based on what Dr. Cross revealed and didn't reveal.

NDI is a network digital interface developed by NewTek for use over a local network, but there are ways to get NDI over the internet. NDI comes in two versions, NDI HX and FULL NDI. NDI HX is compressed like h.264, with some delay and adjustable bandwidth. NDI HX @1080p typically requires about 10Mb/s. FULL NDI uses I-Frame encoding, provides single-frame delay and requires a GbE network and router. FULL NDI bandwidth @1080p is fixed at 90-180 Mb/s. Bandwidth of 200-300 Mb/s is needed for 4K FULL NDI.

New in NDI Version 5
NDI Remote could be the most useful addition to NDI 5 Tools. It allows connection to audio and video from any remote user over the public internet by sharing a link. More on NDI 5 Remote later in this story.

The NDI streaming interview began with Dr. Cross noting “We launched NDI about five and one-half years ago and I cannot believe where we are today.” He said “Our mission was always to connect all video sources anywhere together. For four of those five years we were focused on the local ethernet, but our goal was always bigger than that. When you look at NDI 5 and where we are today, our goal is not to focus just within a building, but to connect every computer, every camera, every source in the world together so they can all work together. I feel that is where we are going and what technology today is allowing. It’s a very exciting vision and the future, and it’s the thing for us to be working on.”

NDI Remote
The NDI Remote goal was to make it so anybody anywhere can become a NDI source and send a link to that source to anyone anywhere. “We wanted to make it as best we can that you don’t need to think about firewalls or IP addresses. It works much like a Zoom meeting would. Someone sends a link and others can connect to that link and be part of the show."

"Our goal goes back by design to allow anybody anywhere to connect with anywhere else, and NDI Remote makes that very easy,” he said. He also said he was “hopeful there will be all sorts of creative uses of this that we never contemplated that I think will happen.”

Dr. Cross commented, “The most exciting part of what I do is seeing the incredible things that all the users are doing with it.” Courtesy Keycode Media.

“In many ways, browsers are the piece of software that is running on every device, everywhere in the world. This integration where we allow video to flow from browsers into a production system is game-changing, and hugely important in the long run. That is an area that you are going to see us much improve as we move forward to add functionality around it.”

He continued, “We need to make video in and out of browsers easy. This is the beginning of that. NDI Remote, while it solves a need right now, is part of a much bigger direction that we are headed.”

He also noted NDI Remote is only bi-directional when it needs to be. NDI Remote latency details were not discussed.

Secure Sharing
NDI Bridge is, in effect, bridging two or more networks to allow video to flow freely between those networks. Dr. Cross explained, “If I ran a Bridge Client and you ran a Bridge Client, we would just see each other’s sources like we were on a local network. Now all of our sources can work together.” NDI Bridge supports all the benefits and control NDI offers such as PTZ, tally and device control. “There is a lot that NDI Bridge does that is quite revolutionary and quite different. I think (and the team will tell you this,) that we have really pushed the envelope in terms of what we can do, how we can do it, and how flexible it can be made. We think it is going to be a real game-changer for us all.”

Multiple video sources from a local network mirrored into the cloud will remain in sync when delivered in the cloud. “Connecting multiple sites can get a bit more interesting,” he suggested.

User Datagram Protocol (UDP)
“Reliable UDP is really a truly huge feature we are adding. It will probably be the least noticed feature because if it works, it will just work, and people won’t notice it is happening. It’s hugely important.” Everyday, there are tens of millions of people using NDI in all sorts of installations, in all sorts of ways and, “we get a good sample of how their networks look. We have found that there are some real network setup issues that are hard to solve for people,” he said.

One of the challenges of NDI 4 was that there were common setups that were difficult to make work well. “We actually designed Reliable UDP based on Quick, which is a state of the art support for high latency connections. We have seen remarkable improvements where networks that were problematic under previous versions now 'just work'. I’m hopeful that this is going to make a huge difference for people,” he said.

For Mac Users
“We’ve made a huge effort on the Mac side to improve things. Obviously, we support Apple Silicon,” Dr. Cross stated about Apple's new lineup of processors for the Mac platform. “We actually worked directly with Apple, who deserves a lot of credit for helping us on getting native Final Cut Pro support. Beyond that, we have this new user interface experience on top of NDI Tools, which is now fully supported on the Mac just like the PC. We’re essentially running the same code on both.”

He also said “I can tell you that there’s another secret feature coming that’s not being announced. We’ll keep it a secret but there’s some really cool stuff coming for the Mac. We’ve really dedicated a lot of time to that.”

Ready, Set, Test
What Dr. Cross also didn't reveal was a release date for NDI 5 Tools. NDI 5 was promoted in a webcast and promised a month ago, soon to be released. There's no rush on a live-TV world stage as large as NDI and no second chances to make a first impression.

Thousands of NDI users have signed up on a release notification waiting list. We’re on the list and know the wait is for a good reason. When its released, we'll test the performance of the new tools with our NewTek TriCaster Mini and Spark 4K and report our field test results in The Broadcast Bridge. It all sounds terrific, but I've learned to be skeptical about anything I hear about TV until I actually see it perform on TV.