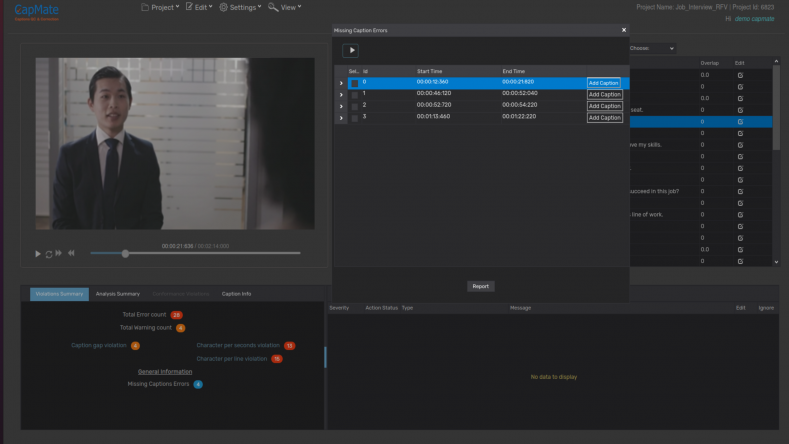 Venera’s CapMate can now detect missing captions as part of its expansive list of caption verification and correction features.

Venera Technologies announces the ability to detect missing captions in captions/subtitle files as part of its CapMate cloud-based caption verification and correction service.

Venera Technologies announced the latest feature in an expansive list of features for its cloud-based caption/subtitle verification and correction service, CapMate. Detecting segments of a media file that is missing its corresponding caption has long been considered a manual, error prone, and time consuming effort. The operators have to closely watch the entire content, looking for segments where there is speech but no corresponding caption. CapMate’s missing caption feature now automates and simplifies this otherwise resource intensive operation, saving users hours of manual work.

“We are pleased to add this much-requested feature to a long list of other customer favorite features in CapMate. Our goal has always been to make CapMate the go-to service for anyone who needs to verify and correct their caption and subtitle files. With addition of the ‘missing caption’ detection, we are taking yet one more step in that direction.”, said Fereidoon Khosravi, SVP of Business Development for Venera Technologies.

Along with the just announced missing caption feature, CapMate provides many other intelligent and cost saving detection and correction features, such as caption-audio sync, burnt-in text overlap, missing translations, caption timing issues, profanity, and hard to detect format compliance, to mention a few.

This cloud-based service with its usage-based pricing and monthly, annual or ad-hoc plans provides the ideal tool for any organization or individual who needs to verify the side car caption or subtitle files in a timely fashion and within budget.

CapMate’s automatic analysis capabilities which employs machine learning techniques, expedites verification of any caption file. And its intuitive interactive interface provides users with easy to use capabilities to automatically or manually correct the issues, as well as the ability to generate a new clean caption file. All of this can be done in a fraction of the time that it would take to do the work manually.

And for those customers with a large volume of caption/subtitle content, CapMate’s dynamically scalable cloud architecture, provides the ability to run hundreds of jobs simultaneously, further expediting the overall process.