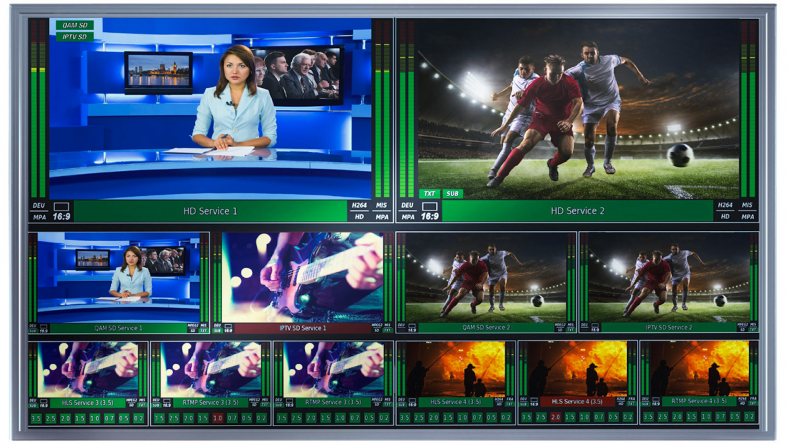 Claimed by the company to be a world’s first in IP workflow multiviewing, the new Scalable Distributed Multiviewer feature offers unprecedented configuration flexibility for users through its ‘any to any’ function. This unique feature, which can be added to existing PRISMON installations, enables any input to any output connectivity through IP proxy networks for up to 36 remote devices.

This scalability option enables users to display a mosaic view on a particular PRISMON system with input services decoded on any other PRISMON system within the same proxy IP network. So, for example, users can render a view with multiple UHD inputs – beyond the decoding capacity of a single system. In addition, it helps overcome the fact that only a limited number of physical ASI and SDI interfaces are available on a single system.

“As broadcasters continue to increase channel numbers and distribution methods to consumers they need technology that enables them to quickly adapt to everyday changes,” commented Andreas Loges, Vice President Media Technologies at Rohde & Schwarz. “This new Scalable Distributed Multiviewer function in PRISMON provides an extraordinary level of flexibility by allowing you to offer any input signal, decoded on any PRISMON within the IP network, to be displayed on any other PRISMON output within that same network.”

In addition to this increased flexibility, the new Scalable Distributed Multiviewer Function has been designed to address several other common issues found within IP-based production and distribution networks. One of these is the thorny issue of resource allocation: the latest version of PRISMON requires significantly less CPU power and fewer decoding licenses. The SDM feature also provides higher network flexibility and is part of a series of new tool sets that will allow configuration of a large number of PRISMONs through a centralized control user interface – the Multiviewer Control Center.