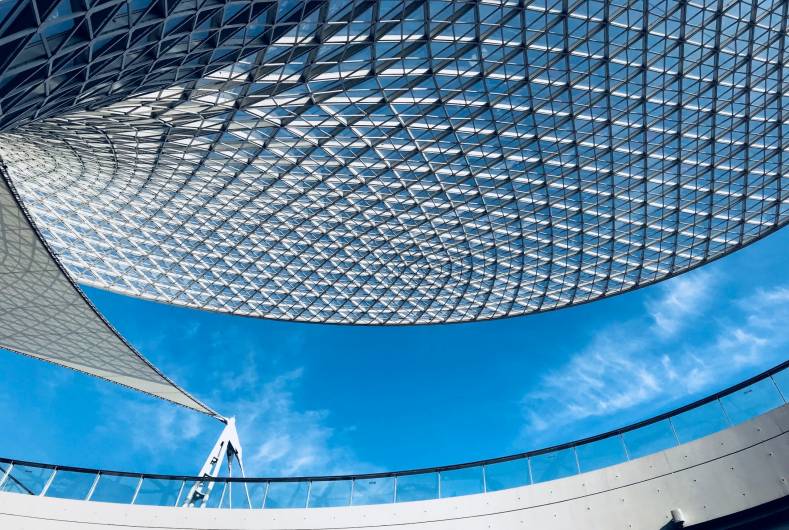 To avoid interference with other devices, TPC (Transmit Power Control) is used. This system reduces the transmitted power to the minimum necessary to maintain adequate data throughput but at the same time keeping the possibility of interference to a minimum.

It is important to note that 5GHz is not 5G and it is not Wi-Fi. 5GHz is a frequency spectrum available for use under the regulations stipulated in the country it is being used in. Wi-Fi standards such as IEEE 802.11n use the 5GHz spectrum and wireless-networking routers complying with it will also use 5GHz. However, Wi-Fi does not have exclusive use of the 5GHz channels (as shown in figure-1) and shares it with other users such as broadcasters with intercom devices and earth exploration satellite services (5.255 – 5.35GHz in the UK).

5G is a data service provided by mobile phone operators and has nothing to do with 5GHz. Generally, the frequencies used are in the range 6GHz to 100GHz (and beyond) and are entirely dependent on the country they are being used.

Moving into the 5GHz band takes us into the SHF (Super High Frequency) range as defined by the ITU and refers to the spectrum 3GHz to 30GHz. Although 5GHz only just appears in this range, SHF has some interesting characteristics we can take advantage of, especially for intercom.

As signals increase in frequency, they become more directional and the SHF range includes the lowest frequency where the radio waves can be directed in narrow beams with convenient sized antennas. They can still be used omnidirectionally but being able to steer the beams allows us to make better use of the power available. This gives the further advantage that they will not interfere with nearby transmissions on the same frequency, allowing frequency reuse.

Although the signals can penetrate walls and objects, from about 3GHz, the signals start to reflect off hard surfaces such as the roof of a sports stadium, or concrete building. However, we can use this to our advantage.

The superimposition effect applies to any two or more waves travelling in the same medium. In this case, although the beam may be quite narrow, the transmitted waves disperse in a cone shape and spread out slightly. When an antenna is in the vicinity of a surface, such as the floor, and is close to the direction of the beam, some of the radio frequency will propagate off-axis and bounce off the floor and mix back into the signal at the receive antenna. The resulting waveform will either be increased or decreased depending on the phase of the waveforms. In other words, the two paths will arrive constructively or destructively.

Augustin-Jean Fresnel (1788 to 1827) developed the concept of Fresnel-zone analysis. This describes a shape in open space called the prolate ellipsoid (similar in shape to a rugby ball or American football) that follows the shortest path between the transmitter and receiver. The shape is divided into zones. Each zone is a function of the transmission frequency, and the distance between the transmitter and receiver antennas. Zone-1 is closest to the transmission path, then zone-2, zone-3 etc.

If we assume horizontal polarization for transmission and an object resides within zone-1 only, the signal will bounce of it in the direction of the receive antenna, causing a phase shift of up to 90 degrees to occur on the second signal relative to the original (due to the extra distance travelled). If a reflective object resides in zone-2 but not zone-1 then the phase shift will be between 90 degrees and 270 degrees, and for zone-3 this will be between 270 degrees and 450 degrees.

This has a very interesting effect on the signal at the receive antenna. For phase shifts up to 90 degrees, due to the superimposition of waves, the interference is constructive. This means, if a signal is reflected within zone-1 only (assuming horizontal polarization), the signal at the receive antenna will be increased. This can be seen in figure-2. 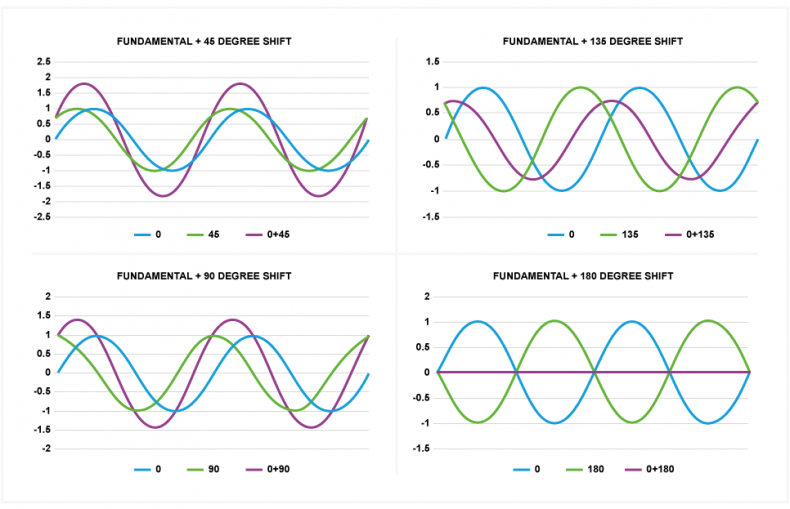 If the transmit signal is sent using vertical polarization, the effect is similar but the reflected signal phase shifts by 180 degrees resulting in the destructive and constructive interference results discussed above shifting by 180 degrees. Therefore, if the polarization is vertical and a reflection occurs in zone-1 of a horizontal surface, the reflected signal will be 180 + (up to) 90 degrees resulting in a destructive interference at the receiver.

This effect, regardless of polarization, is called multipathing.

As we saw earlier, for a 5.850 GHz signal, the difference between the constructive quarter wavelength and destructive half wavelength is only 13.5mm (0.53 inches), so even the smallest movement at the receiver or transmitter can greatly affect the receive signal strength. Even relatively slow-moving objects can cause constructive and destructive interference in the 5GHz band. Consequently, signals of different frequencies constantly increase and decrease in amplitude depending on any relative movement and reflection.

One solution to this is to use OFDM (Orthogonal Frequency Division Multiplexing). This is a form of digital modulation to encode data onto multiple carrier frequencies. The data is spread across multiple frequencies with a lower data rate so that when the sub-carriers increase and decrease, only small portions of the data transmission are affected, and these are averaged out over time.

Instead of transmitting a single high-rate data stream with a single carrier, which in itself may be susceptible to multipathing and potentially complete signal loss, OFDM uses many sub-carriers closely spaced within the same channel and transmitted in parallel. This helps alleviate the effects of multipathing and improves its tolerance to the multipathing discussed earlier. Although carriers and sub-carriers may increase and decrease in amplitude as multipathing occurs, the relatively slow changes in the data stream means these anomalies can generally be averaged out.

Orthogonality occurs when the sub- carriers are brought closer and closer together to the point where they overlap. Interference is avoided as the spread is chosen such that the peak of one carrier coincides with the null in the adjacent carriers, thus negating any chance of channel interference.

Also, more can be done with the higher data rates and wider radio bandwidths, and this gives a higher audio bandwidth, lower latency and a lower noise floor in devices that use 5GHz. 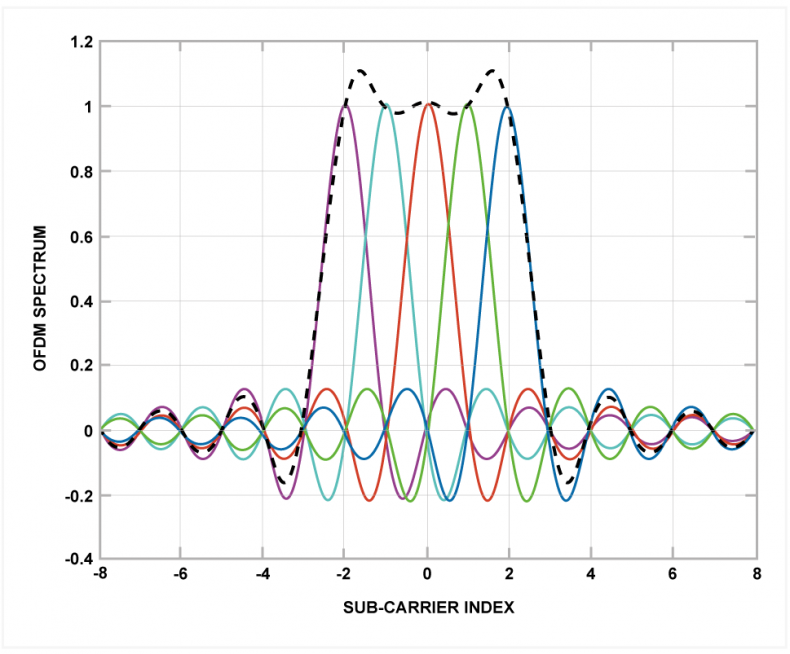 Figure 3 – multiple sub-carriers are brought together so that the peak of one sub-carrier coincides with the null of the adjacent sub-carriers, so interference does not occur. The extent of the sub-carriers forms one channel.

Care must be taken when using OFDM systems as the sub-carriers have a very small tolerance for variation. Digitally controlled oscillators and DSP FFT solutions make encoding and decoding much more reliable, hence their proliferation in recent years.

Broadcasters will benefit greatly from the adoption of 5GHz solutions as many more channels are available and the airwaves are relatively unused compared to the 2.4GHz band. It’s also important to remember that 5GHz solutions provided by vendors specifically for broadcasting are not Wi-Fi. Intercom requires very low latency and reliable audio. Wi-Fi does not consider latency its highest priority, especially when many users want access to a computer network.

Furthermore, the added directional capabilities of SHF provide for greater control when planning RF coverage. Not only can omnidirectional systems be catered for, but any blind spots can be filled with specific directional antennas. Optimizing the RF energy needed further improves separation between bands to enhance resilience and remove channel interference.

Intercom is a highly specialist discipline in broadcast television and is considered by many to be the most important support service provided, especially in live productions. Production crews using RF beltpacks must be in constant communication with the studio and even the smallest outage cannot be tolerated. This is especially true in large stadiums when tens of thousands of people converge. 5GHz has the potential to massively improve communications for broadcast productions.