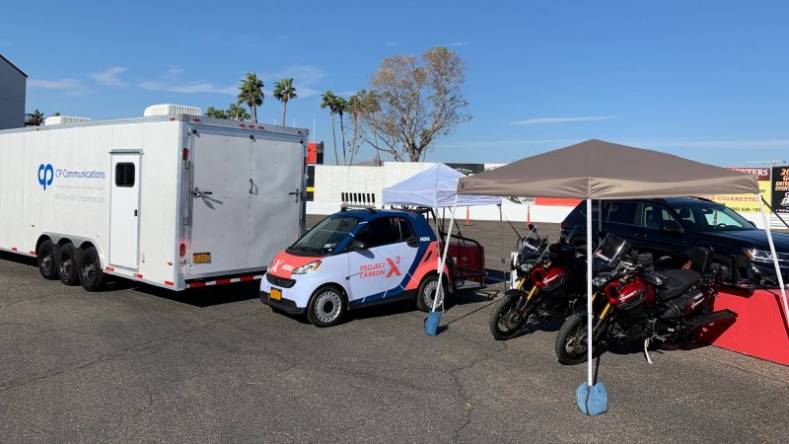 The race was organized by Hoka One One to promote its Carbon X 2, a new high-end running shoe. Hoka had invited some of the world’s top long-distance ultrarunners to test a pair while trying to break the world record for a 100 Km run.

The shoot relied on CP’s Red House Streaming (RHS) IP and bonded cellular technology for live 4K and 1080p content acquisition. CP Communications was contracted by FlightLine Films, which envisioned, produced and broadcast the event for Hoka, and served as technical facilities provider.

CP technicians brought CP4, a 40-foot production B unit, to house the streaming signal processing and monitoring equipment, including several Mobile Viewpoint Playout 2K4 servers. The two vehicles were parked close enough to run copper between them to share signals.

The production featured footage from two motorcycles and one car, which followed the course to provide closer coverage of the runners. CP Communications’ custom Smart Car featured a robotic camera mounted to a Flowcine Black arm stabilizer, which provided dynamic camera angles and smooth 1080p footage throughout the race. The camera was paired with a Mobile Viewpoint Agile Airlink encoder. Both motorcycles, supplied by MediaMotos, were equipped with Blackmagic cameras and acquired all content in 4K using Mobile Viewpoint Ultralink 4K.

CP Communications added microphones to all three vehicles, providing embedded audio that was de-embedded in the FlightLine truck and used during the production. A Unity Intercom system, which connects via cellular (or Wi-Fi), allowed communications between the motorcycles, as well as the CP and FlightLine production teams.

“There was zero RF at this event, so we provided nearly 100 percent coverage for both 1080p and 4K content acquisition over IP and bonded infrastructure,” said Brian Ready, Account Manager and System Engineer, CP Communications. “We streamed the 12G-SDI camera output directly into our Agile UltraLink 4Ks, which we mounted on the back of the motorcycles. We maintained a steady stream of 6-8 Mbps for signal encoding from the Smart Car, and 15-16 Mbps from the motorcycles.”

While IP and bonded cellular reduced the costs and complexity of live content acquisition, Ready noted that it can be more challenging than traditional microwave transmission because the production does not have control over the infrastructure. “We are the mercy of the cellular carriers, and it’s imperative to confirm that they have the capacity to carry the event,” he explained. “We performed a cellular site survey prior to the event. Upon arrival we ran the entire course to confirm that the quality and extent of coverage would suffice.”