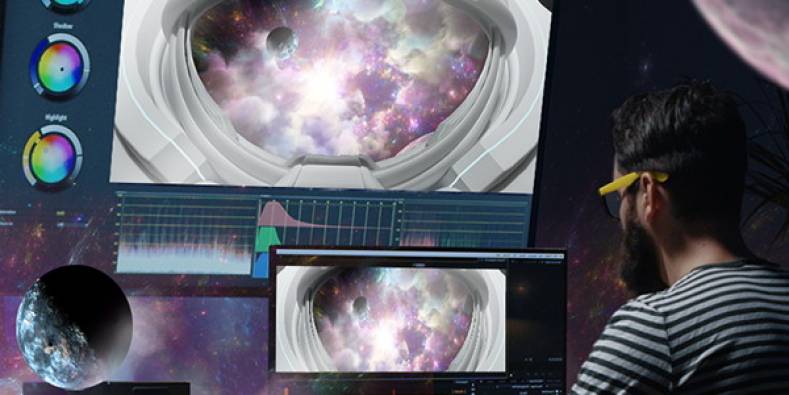 Remote distributed workflows from any continent.

The industry experienced futureshock head-on in 2020. The impact will take a long time to unwind but it’s already clear that some changes will be profound and not all of them bad. These changes include remote workflow permanency, virtual production shifts from exotic to routine and genuine efforts to save the planet. Here’s hoping.

The future of post is not going to be back to pre-2020 normal, but it won’t be the full remote situation enforced by health lockdowns either. The reality is that clients need a hybrid solution, that allows them to have some edits locally, some remote and others splitting their week between the facility and home. It is up to facilities to offer this flexibility which will also benefit their own staff’s work / life choices.

If you’re in LA or London, having to commute across town for a client / artist session just amounted to lost time. Many of those journeys can now be rendered unnecessary given the experience of remote review and approval and realtime screen sharing tools like Sohonet ClearView Flex, Moxion and Evercast.

Several facilities have developed their own content management production, planning and communication tools. Envy for example launched Envy Remote and Technicolor has its own branded Pulse and Techstream. Warner Brothers’ De Lane Lea has Alfred which is intended to support production workflows from camera to conform. Being able to manage content and track progress in this way is essential as post and production evolve into a distributed (international) workforce.

The legacy of Covid-19 will therefore be a ‘mixed economy’ of remote and on-premise working which will ideally be led by the individuals working on each project, rather corporate diktat.

The store and compute resources of many facilities will remain on-premises, perhaps shared into a private cloud, for several years. Ultimately, everything will be on the cloud. The reason it won’t be switched sooner is largely because of cost. The media industry let alone the post production sector is not sufficiently large for AWS or Azure to start striking meaningful discounts. Moving data in and out of a public cloud is probably cost prohibitive for all but the largest and constantly running projects.

Just as more postproduction workflows are going to be maintained remotely the need for face to face collaborative editing and craft finishing may never go away. That’s one reason why city centre facilities in hubs like London, Paris or Montreal will remain important. The human interaction of peers is part of the act of creation. If you stay remote permanently there’s a risk of losing that.

There are those that think the heightened focus on creating efficiencies means a shift to the ‘sharing economy’. This de-emphasizes the need for ownership where access to tools and equipment looks more like renting. For media technology, services in the cloud may replace hardware, experts might be hired ‘as needed,’ and unused space like a sound studio will not sit idle for as long as it had before this new economy.

LED stage installations have expanded around the world during the pandemic, which makes virtual production poised to expand significantly in 2021 and beyond. This supercharged growth is due to the control over the environment, time and location; as well as having the ability to provide a safe area by bringing the set to the talent where they are located, rather than flying crew around the world for a production shoot. Virtual set production is within reach of lower budgets, allowing for million dollar sets and locations without spending the million dollars.

There’s no reason why indies can't consider virtual production as a replacement for green screen or location work where travel becomes an issue.

The ability to do much more work remotely has streamlined the way film and TV drama production teams work in prep, as well as in postproduction. Virtual location scouting, monitoring camera feeds over iPads on set or in in another city, cameras operated from small remote heads, and remote lighting controls will be an essential part of the cinematographer’s toolkit going forward.

No Greenwashing On Sustainability

2021 should be the year when carbon neutral goals jump front and centre of all industry decisions, alongside that of employee, staff, crew wellbeing. There is already momentum from the likes of the DPP’s ‘committed to sustainability’ initiative and BAFTA’s Albert along with new EU-wide energy ratings for appliances including TVs (that A* rated 48-inch panel you bought in April is probably now a ‘F’ in the new stricter labelling).

According to Albert, an hour of TV typically generates about 14 tonnes of CO2. That’s just production: it doesn’t include transmission or distribution. To put that into some context, an hour of TV has the same impact as running three homes for one year. Sustainability is fundamental to how media organisations should operate going forward.

Improvement in videoconferencing and telepresence can reduce the carbon-heavy cost of corporate travel. Remote distributed anywhere production is not a nice to have concept but an essential business continuity and environmentally conscious workflow for any content producer.